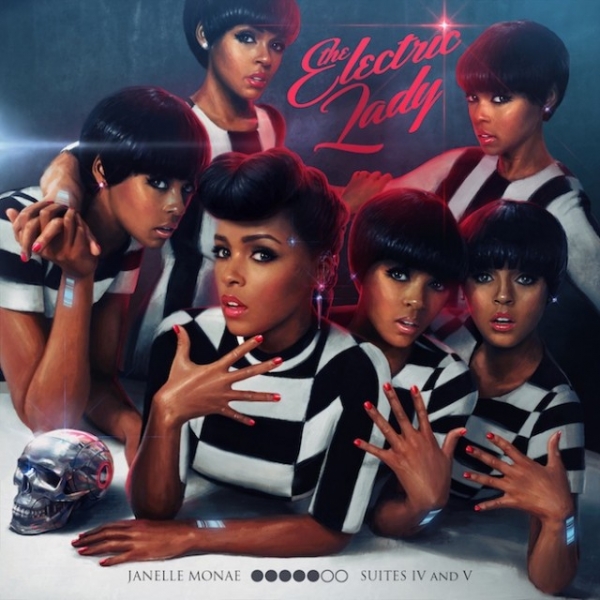 On her 2010 breakthrough album, Janelle Monáe announced herself as one of the most exciting and visionary pop artists to have emerged in a very long time. That record, a 70 minute two-suite continuation of the Metropolis concept story featuring her messianic android alter-ego Cindi Mayweather, showcased a remarkable depth of craft, consideration and performance.

Rather than alienating with its concept, it used the story’s sci-fi base as a springboard to deal with notions of identity, self-liberation and love triumphing over hate in an Afro-futurist context – it was much more than ‘just good pop music’. This second album follows a similar trajectory by marking the fourth and fifth suites in the seven part series with more remarkable ambition and talent to match.

As with The ArchAndroid, Monáe calls in a number of collaborators to add flavour to her genre-hopping styles, with notable guest appearances from Prince, Erykah Badu, Solange Knowles and Miguel. These shifts are welcome too, because Monáe clearly has little interest in brevity – we get 19 tracks here (including a few short interlude skits) which basically amount to two albums worth of material. The scale of the album is all tied up in its scope though, and she creates a vast musical metropolis; a labyrinthine exploration of pop, r&b, soul and funk which – even after setting such expectations with her debut – strikes as remarkably impressive.

There’s little doubt that she’is a student of the classics, but this is much more than an exercise in genre homage. While it does hold a great reverence to authentic sounds, from the stabs of horn ensembles and weeping soul strings to those those cheesy Michael Jackson-esque slide guitars, it also has a great deal to say for itself by re-articulating these combinations into a thoroughly modern shape. The grandiose spaghetti western sound of the opening ‘Overture’ segues right into the sexual stomp of a Prince collaboration which is all lithe guitar strokes and wonderful, panting drums, but is a little short on hooks. It’s a rare misstep, and certainly not a problem shared by the lead single ‘Q.U.E.E.N.‘ featuring fellow neo-soul queen Erykah Badu. With its slapping Parliament-esque bassline and sassy lyrics, it sews the seeds of empowerment which guides the record’s theme. Monáe establishes her credentials as a positive lyricist with lines like “Am I a sinner with my skirt on the ground” or “while you selling dope we gonna keep selling hope” while avoiding any hint of preachiness. Similarly the title track with Solange Knowles is a bit of a girl power anthem; lush, poised and empowered, it breaks down the traits of an electric lady against a fuzzy soft funk backdrop, and comes with an irresistible chorus.

Here it becomes clear that the eponymous Electric Lady is designed as an aspirational figure and such ideas of feminism recur throughout the album, questioning as above but mainly positive, as suggested by the all-female cover and the video for ‘Dance Apocalyptic‘ – which must be hands-down the catchiest tune of the year. Moreover though it’s a record about embracing one another, about shirking the idea of ‘otherness’ or ‘queerness’ which Monáe co-opts so well in her own image (rarely seen out of a black and white tuxedo and with her trademark shaved in haircut, she’s a refreshingly unusual sight for a female popstar). During one of the (mostly very annoying) radio DJ interludes, a caller claims “robot love is queer” and gets quickly shut down for his ignorance. This thread of acceptance and understanding being paramount runs through the album lyrically but is also largely implicit in the fact that it’s a record about an android (an other) which is so flush with soul and humanity.

Elsewhere, ‘Ghetto Woman’ – a tribute to Monáe’s mother – is propped up by funk and empathy as she cries out “all you ever needed was someone to free your mind”, and ‘Victory’ marks perhaps the most unashamedly blunt greeting-card positivity in her oeuvre with the genuinely uplifting chorus line “to be victorious you must find glory in the little things”. Some of this might sound trite, but as an R&B artist her responsible and intelligent lyricism is not only quite rare, but marks her out as a well needed role-model for the genre. Perhaps Monáe’s biggest triumph is simultaneously representing authentic R&B, real classic blue eyed soul, while also tearing to pieces the hollow sexualised counterfeit of the genre which has become so ubiquitous in the charts (incredibly Monáe’s only chart success to date, on either side of the Atlantic, was her guest spot on the Fun. track ‘We are Young’). ‘Primetime’, a weary ballad with Miguel, demonstrates her affinity for the classic sounds, while her risk taking shows on ‘What An Experience’ – a Mediterranean beach pop track so completely ludicrous and brilliant that only she could pull it off. Above all else the songwriting on show here is incredible, and almost every track on the album could easily represent the pinnacle of most other artists careers, but for Monáe is just another song – it is almost impossible to pick out highlights from such a strong pack.

All of this might serve to make The Electric Lady sound like a bit of slog but more than anything it is relentlessly good fun to listen to. Even on it’s downer tracks such as ‘Sally Ride’ or ‘It’s Code’, the whole thing sparkles with such character and panache, and is as whip-smart as pop music gets, that it’s impossible not to love. Given its length, the album probably won’t get many listens from front to back but the tunes are there to drop into this fully rendered world for a shorter spells. All in all, it is one of the most exceptionally realised albums to enter the world since her last release, and confirms that both as an artist and a role-model Monáe really ought to be celebrated as Electric Lady number one.

Listen to The Electric Lady