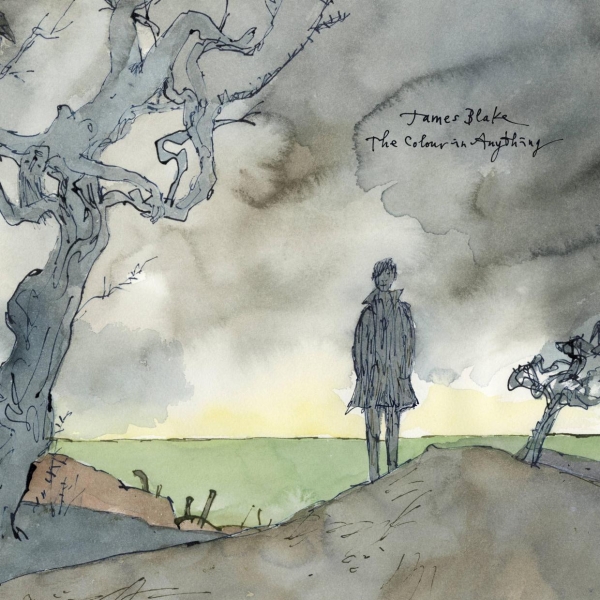 A few months ago, James Blake was invited to collaborate with Beyoncé on her surprise new album Lemonade. He ended up helping to write the record’s opening track, as well as co-writing and singing on the song “Forward”. Two weeks down the line, Blake stole the spotlight for himself by using the very same surprise marketing strategy.

On May 5th, during an interview with Annie Mac on Radio 1, Blake announced that his third full-length, The Colour in Anything, would be released at midnight. Being able to sacrifice an entire advance marketing campaign in order to release an album as a surprise is a move that only established and well-respected musicians can pull off. And the fact that Rick Rubin, Frank Ocean and Bon Iver were all involved in the making of Anything only goes to prove the strong position that Blake holds within the music industry, and the flexibility that has given him in order to express his art how and when he wishes.

Even Kanye West, the world’s number one rockstar, is a fan, referring to Blake as his favourite artist right now. Despite Blake claiming that he wanted West to appear on the track "Timeless", coupled with the fact that the pair have been in the studio together, Kanye is notably absent here. It’s a testament to Blake’s ability that he doesn’t even need Kanye’s help to record a great album - he’s already proven it twice, first on his amazing self-titled debut album and then on 2013’s Overgrown.

The Colour in Anything shares the same nagging sense of loneliness as his first two albums, but it’s amplified. The album is a heavy 17 tracks that last over 70 minutes, meaning it’s a long and intense listen, but deliberately so - loneliness is a long and intense feeling. Opener “Radio Silence” is a metaphor for a relationship’s uncomfortable breakdown in communication, and throughout the album it becomes apparent that the source of Blake’s loneliness is failed relationships.

But Blake acknowledges this and searches for an escape, especially on the Bon Iver-featuring “I Need A Forest Fire”, which acts as a metaphor for Blake desperately craving a fresh start - he wants the fire to destroy everything so he can start again. As Blake seeks an escape, we’re given “Put That Down and Talk to Me”. It’s a song about Blake struggling for inspiration during the album’s recording and smoking too much weed to combat his lethargy - although, in reality, it only enhanced it. However, this setback actually benefits the finished product - in search of inspiration, Blake became more open to collaborations (he’s no stranger to samples, remixes or covers, but he rarely collaborates) and recorded the album at Rick Rubin’s famous Shangri-La studio, a welcome move that added an extra layer of polish to the album’s pain.

The album’s title track, "The Colour in Anything", is the epitome of Blake’s loneliness and subsequent lack of inspiration: “And how I told you what I’d do, if one day I woke and couldn’t find the colour in anything,” he bleakly pines, as his pessimism peaks. Perhaps it’s fitting then, given the insecurity and doubt of the title track, that the album should be brought to an end with “Meet You in the Maze”, a cryptic love song about the uncertainty of the future and the tangled paths that can easily lead you astray from achieving happiness.

James Blake has always been an outsider - it’s probably why he's spent so long working on his own - but he's also a cut above all the other sadboy electro-loners. Opening his arms to more collaborations on writing and production (Frank Ocean co-wrote “My Willing Heart” and “Always”) has broadened his potential and proved there’s more to his arsenal than just a self-pitying Burial wannabe with choirboy vocals.

Blake is stood on his own as the darkening sky burdens him on the album's artwork - a painting immediately recgonisable as work by the legendary Roald Dahl collaborator Quentin Blake. It perfectly encapsulates the sound of The Colour in Anything, and of James Blake’s allure in general - taking an intense and isolating gloom and turning it into something beautiful and distinctive.