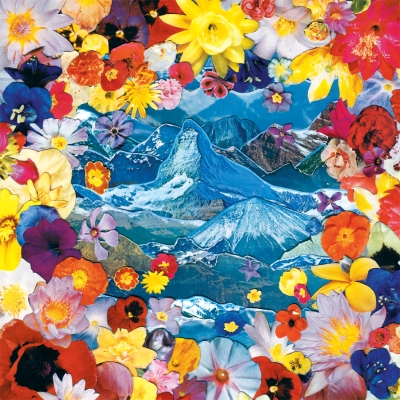 Hearing that Islet have put out a mini-album feels like a “Judas!” moment, so used are we to the way their star has risen almost by stealth. Alright, the Cardiff band have done normal things like NME features and support tours, but their much vaunted lack of web presence, inscrutable instrument swapping live sets and DIY artistic sidelines gave them the feel of a band who worked entirely away from the modern rock’n’roll carousel. Not that the six tracks on Celebrate This Place exactly constitute a sell-out, self-recorded in their own barn HQ and aimed nowhere near the Zane Lowe school of alternative radio.

You’d be forgiven for wondering how well their syncopated, primal howl and call would transfer from live to recorded, given its energy in stage. Your answer, fortunately, is about as well as it could ever do short of actually being chased through a crowd by a man wielding a bass or tambourine. So tribal drums and tone poem vocals develops into Velvets by way of Galaxie 500 drone, turns into northern post-punk art-rock circa 1979 and then, where most people would put a chorus, decides to turn into a drum and phenomime (look it up) breakdown before dipping into Metal Box Public Image Ltd and repeating all of the above over multiple percussion and analogue keyboard whirring before dissolving into distorted wordless choral. And that’s track one, ‘We Shall Visit’, done.

This isn’t done in a lo-fi sense, or at least not all the time – these are people who know the dividing line between making a hell of a noise with their instruments and keeping some sort of order of their own. The aura of New York’s experimental underground scene of the late 70s No Wave pervades these explorations in vocal as another instrument amid motorik rhythm and judicious guitar, borne of attempting to give ideas given free reign yet still make them listenable in a sense other than crash-bang chaos. The Krautrock drumming and otherworldly vocals of ‘Jasmine’ recalls the post-disco of Holy Fuck and Liquid Liquid or the synth soundtrack psychedelia of Zombie-Zombie, only formed into brand new exciting shapes; ‘Rowan’ has the hypnotic ebb and flow of a less grandiose take on Spiritualized’s Pure Phase; ‘One Of These Days’ subtly shifts from apprentice space rock through Gang Gang Dance’s abstract electronics to walls of clattering Can-like explorations.

I’ve already used the word ‘phenomime’ in this review, so let’s give Celebrate This Place the full Paul Morley channelling it deserves – what it all adds up to is something pure in its own self, funnelling trancelike pulsing into a righteous whirl of shapeshifting noise and purpose. How they’ll follow this, or just formulate this approach into a full-length record, will be fascinating to watch.