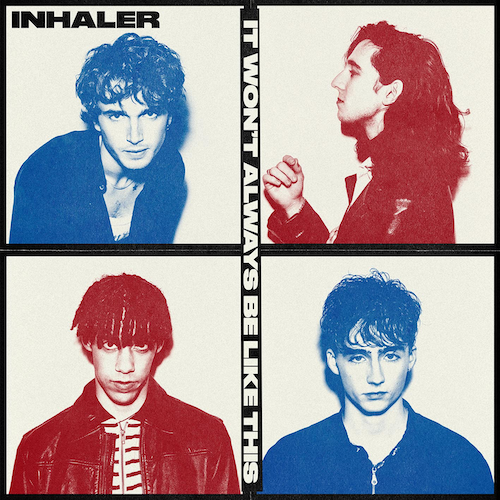 After releasing their enigmatic single “Ice Cream Sundae”, Dublin’s Inhaler have been dropping a consistent string of successful rock soaked singles. This upward stairway has all been leading to this moment - their eagerly anticipated debut full-length effort It Won’t Always Be Like This.

Cementing themselves as one of the fastest rising newcomers from Ireland, Elijah Hewson (vocals and guitar), Josh Jenkinson (Guitar), Robert Keating (Bass) and Ryan McMahon (Drums), indeed wear their inspirations on their sleeves like roughly sewn patches upon denim. Across the album’s eleven tracks comes a stream of rollicking rock performances and indie anthems, with nods to the likes of The Stone Roses and The Strokes shining through prominently.

Offering a nostalgic glimpse at Inhaler’s roots, the titular track is a re-recorded version of a years-old number, “It Won’t Always Be Like This” demonstrates the bands evolution and sonic maturity through bold vocals, synth-laden instrumentals and an unstoppable momentum. This fine-tuned reimagination perfectly leads into the second track, “My Honest Face”.

Holding its place as the first single to be released from the album, “Cheer Up Baby” excels with its evocative lyricism and bold bass line, resulting in a funk-infused groove that revels in being second-to-none. Like all good anthem-fodder ideas, it certainly finds itself radiating an utterly timeless and enthusiastic air.

Sliding through the sultry “A Night On The Floor” and the adrenaline fuelled “When It Breaks”, eighth track “Who's Your Money On? (Plastic Houses)” arises. Possessing a gigantic chorus that compliments its soaring guitars and jangly percussion in a fantastic fashion, the cut gives insight into the heights that Inhaler are truly capable of.

The softer and more laid-back tunes, “Totally” and “What A Strange Time To Be Alive”, provide a unique side of Inhaler that has little been explored, offering potential for another side to this anthem-churning four piece.

Album closer, “In My Sleep”, acts as the most rock-heavy element of the eleven. Strained vocals and crashing drums feature atop an electrifying guitar riff and sultry bass lines in a last attempt effort at creating an unforgettable sonic adventure.

It Won’t Always Be Like This offers an impeccable blend of nostalgia inducing guitar riffs and emotive narratives that make for a spectacular debut album. Promising and full of potential, the boys have delivered and exceeded expectations, it’s safe to say that their intoxicating indie rock cuts are here to stay.