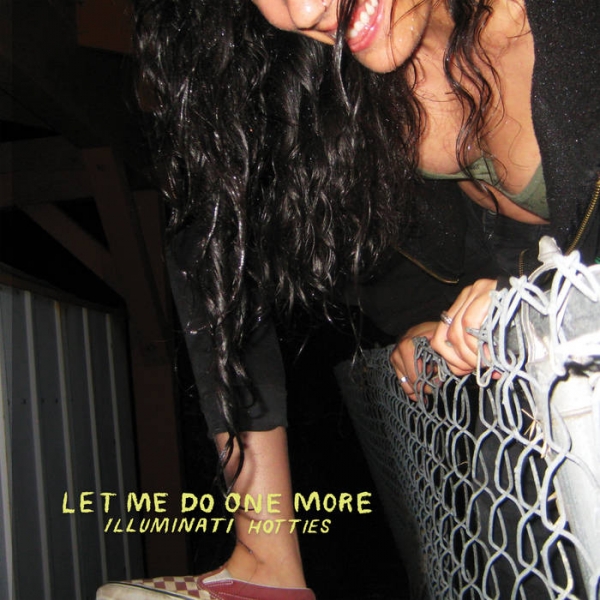 As the title informed listeners from the beginning, 2020’s FREE I.H. This Is Not the One You’ve Been Waiting For was not the Illuminati Hotties record anyone was expecting.

At the time, Sarah Tudzin’s “tenderpunk” outfit was embroiled in an acrimonious dispute with her previous label, Tiny Engines, leading to the quickly assembled mixtape. The results shined with biting fury, DIY charm, and loads of personality, but fans were also left waiting on Tudzin’s sophomore record. Wait no longer, because Let Me Do One More is a pitch-perfect follow-up to both the plaintive indie punk of Tudzin’s debut and to the freewheeling experimentalism of her mixtape.

Once again, the biggest attraction here is Tudzin herself. She’s invariably dynamic and magnetic, whether she’s delivering indie punk bangers or baring her soul in stark, vulnerable moments. It’s the “tenderpunk” contradiction that is at the center of her music, straddling the worlds of the sunny surf rock of the opener “Pool Hopping” and the beautifully unpolished confessions of the closer, “Growth”.

Between those two points, the band explores a wealth of styles, including a country-tinged beach ballad with “u v v p” Y2K-era acoustic love song on “The Sway” and snotty punk rave-ups on “Joni: LA’s No.1 Health Goth” as she dives into each style, Tudzin also pulls from her bag of studio tricks, brought along from her accomplished production and engineering career. While perhaps not quite as roughly hewn or erratic as the dizzying rush found on FREE I.H., the resulting mix of styles is a polished update on Tudzin’s many creative rabbit holes.

Most importantly, the record also places all of her pop melodies, instantly quotable lyrics, and creative production choices front and center. The upbeat cuts like “Cheap Shoes” are instantly gratifying party punk, but also invariably feature enough left-field instrumental choices to feel fresh and wild beneath the finely-tuned hooks. The aforementioned track switches on a dime into a chaotic fractal maze of panning guitars, while the cutesy sing-song melodies of “MMMOOOAAAAAYAYA” become wonderfully manic cheer-chants on its bridge (“Love me, fight me, choke me, bite me/The DNC is playing dirty/Text me, touch me, call me daddy/I’m so sad I can’t do laundry!”).

While these moments of frenzied energy offer a certain type of release, the band just as often slows the pace down for a different catharsis. The gentle croon of “Threatening Each Other re: Capitalism” and twisting ponderous howl of “Kickflip” both revel in the daily dull weight of modern living, with Tudzin confessing, “I’m getting tricked into long-term commitments/And layaway plans financing my life/My mouth is dry/The corner store’s got sugar pills/To settle our consumer guilt.”

Elsewhere on the record, these pains are delivered as biting satires of wellness culture and the music industry, but here they’re raw and unadorned, giving glimpses into Tudzin’s down moments between the record’s bouts of bouncing pop energy. Nowhere does this cut deeper than on the closer, “Growth”. Tudzin’s boisterous personality is reduced into an intimate whisper, with her vocals cracking over sparse acoustic fingerpicking in her most tender performance on the album. It feels almost like watching a close friend compose a song in real-time, offering a voyeuristic beauty that ends the record on a heartbreaking vignette一”I guess being an adult is just being alone / I'll go back to the couch / Let you stare at your phone / We'll pretend this is normal / We'll pretend this is growth.”

Therein lies the beauty of Let Me Do One More. Tudzin’s joy and aching heart both feel like communal experiences, even while exploring isolation. It’s the kind of record to laugh, rage, and cry to, very much delivering on its early promise of “All rip'rs / No more skip'rs”. Each moment, whether of effusive joy or of tender intimacy, is anchored in well-honed pop hooks, standout engineering prowess, and larger-than-life personality.