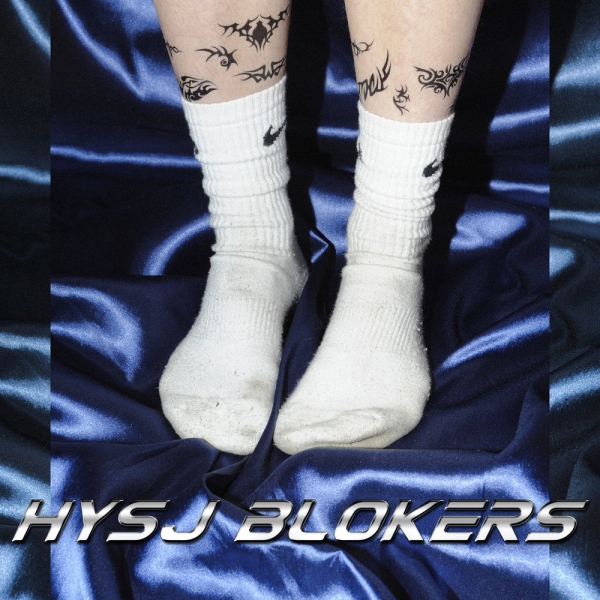 The title of this debut EP by Norwegian duo Hysj comes from a Polish term for tower block-dwelling “antisocial” youths who kit themselves out in a certain sportswear brand’s tracksuits. The Blokers are “block people”, a term that’s clearly meant to be pejorative – but this pair of noisemakers are reclaiming the term for outsiders everywhere through their uncompromising ethic.

Clad in Adidas, Sigrun Sæbø Åland (vocals) and Kim Mikal Torp (music) have their roots in the Oslo hardcore scene, a commitment to DIY and a wish to do things on their own terms. They’ve signed to kindred spirits KOSO, and with this five-track release they’re taking their cold insularity out into the world.

Blokers is made up of five songs which translate to “Asphalt”, “Marble”, “Plastic”, “Brick” and “Ash” (Åland sings – or shouts – in Norwegian) and this functionality is often reflected in Hysj’s music. A sound indebted as much to hip hop as it is to the noise of Crystal Castles, the in-the-red nature of Hysj’s approach means that this EP is never anything less than thrilling.

There’s a sort of standard set-up for a Hysj song; there will be some noise confusion at the start, then the beats, courtesy of Torp, come in. Part dirty-south speaker-rumbling drums, part Zach Hill free expression and part industrial goth blitz, there’s little let-up in the percussive intensity on any of the tracks from the moment “Asfalt” roars out. Once the overdriven guitars are added and Åland begins her compelling sing-shouting the effect is almost overwhelming. Hysj have talked of their music being forever dark and snowed in, or the sound of being “trapped inside your own head” and while you can appreciate this as cold, dark and insular music there’s something else going on here.

It might be hard – even if you know Norwegian – to make out what Åland is singing about but there’s something universal which transcends language. The passion in Åland’s voice is mighty and acts as the conduit for the Blokers. You can understand the feeling if not the words; the depth of disillusionment with society, the search for a way out that’s not through chemicals, the struggle to find something that’s not simply a blacker shade of black.

Yet don’t think this is purely bleak, nihilistic music. From the EP title, through the way Åland delivers her vocals to the way that Torp fills every note with energy, there’s a positivity which crackles through the songs. There’s even a lightness of touch at times: the gorgeous, floating orchestral outro to “Plast” is – while not a sunburst – beautifully radiant, while the final notes of “Aske” are pure white light before the silence which matches the duo’s name of choice cuts it off.

What’s also worth noting is just how danceable this music is; another way to express positivity, the trap and hip hop inspired moments are almost joyful in the face of the noise, and again this is a celebration of an oft-maligned subculture. Hysj are not afraid, clearly, to celebrate the underdog.

Blokers is a terrific achievement. A record which delves into the darkness but comes up to the surface full of fight, Hysj channel aggression, melancholy and disillusionment into something special, something positive.