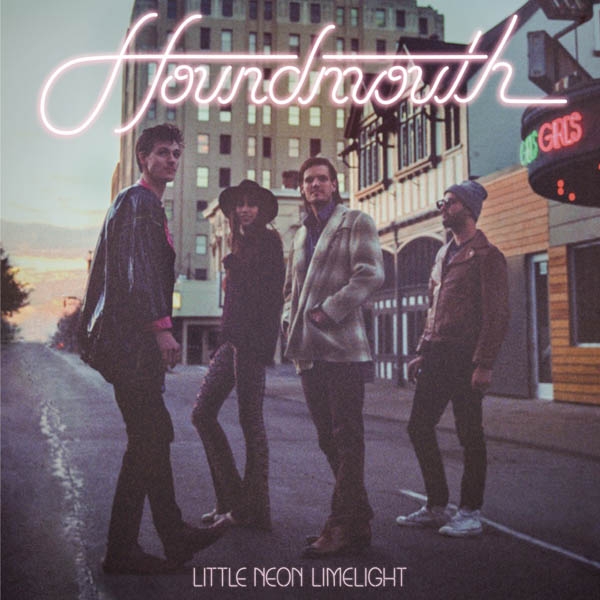 It’s just as well that Houndmouth have come up with the name Little Neon Limelight for their second record, otherwise metaphrically minded music hacks would have had to wring it out as a synaesthetic visualisation of their sound. And it’s just as well that Albany, IN’s very own roots-folk rock youngsters are back on Rough Trade with the follow-up to their 2013 debut. Matt Myers, Katie Toupin, Shane Cody and Zak Appleby caught the attention of critics with their ersatz Nashville-via-Exile on Main St. sway, delivering intimate folky standards and foot-stomping gee-tar in good measure for From The Hills Below The City. Things have moved on a bit since then, and the tracks here are on average more studied, more focused affairs, but past cuts like “Penitentiary”, “Long As You’re Home Again” and “Comin’ Round Again” that seemed most audaciously to mimic the style of The Band et al. were undoubtedly the best, and they’re what bear the sweetest fruit on this record.

Sedona – proudly touted by the city’s official tourism website as one of Rand McNally’s eight most scenic drives in the US – lends its name to the opener, a gushing yet barbed panegyric that’s ripe for mainstream airplay but colours outside of the lines just enough to pique interest. Guitarist Myers croons over a gently rolling rhythm section, assuring Arizona's “little Hollywood” that it may be gone but it’s not forgotten, serenading the red sandstone rocks that were once the backdrop to a glut of Western productions in the golden years of North American cinema. The city itself got its name from one of its earliest settlers, and there’s a characteristic tenderness in the way it’s personified, with Myers crying “Hey there Sedona, let me cut you a deal/I’m a little hung over and I may have to steal your soul”.

The group’s four-part harmonies are liberally applied through the record, but there’s still enough space for each member to front alternate tracks, and it’s when keyboardist Toupin assumes those duties that Little Neon Limelight reveals its beating heart. The languid sweetness of the strummed guitar and velvety organs on "Otis" complement a lovelorn Southern drawl that needs the love of a Georgia man and bemoans the big old range that keeps her apart from her beau. You can practically see the petroleum jelly on the camera lens and the suede tassels swaying from her jacket. Though present throughout, hers is a distinctly underused lead vocal on the record, and both of the tracks on which she is given top billing – "Otis" and "Gasoline" – carry themseves with a transcendent mien, the latter a stripped back latter and achingly humble self appraisal: "No, I am nobody's girl/I just wasn't made for no diamonds or pearls", sings Toupin, ministered by her bandmates on the chorus.

Little Neon Limelight benefits from sparingly irreverent inflections, reminders that while Houndmouth can string together a superior approximation of a tried and tested genre they can also puncture it with personality. The well-worn patterns and petty bourgeois balladry of "Black Gold" harbour a mischievous raconteur in Myers, skipping along in Conor Oberst mode, embellishing sketches of the characters that inhabit the song: “I used to see her sister/Her name was Jenny Gasoline/I used to see her picture/On the cover of a dirty magazine”. The fourpiece manages the same on the surely encore-designated "My Cousin Greg" (“a greedy sonofabitch”), this time trading verses before all pitching in for the sage advice of the chorus: “If you want to live the good life/Then you’d better stay away from the limelight”. It’s like listening to The Last Waltz except without the accordion solos, and this time all the guests are permanent members of The Band. This is a churlish but important point: even when they’re passing the proverbial mic four ways within the space of a four minute cut, none of it sounds messy or tacked-on, and there’s a triumphantly familial feel to the way they craft their harmonies.

We know what to expect from modern Americana: intinerant romance, walking basslines, lyric sheets that read like a Southern special edition Monopoly board. Where Houndmouth’s talents are put to best use in Little Neon Limelight is in the creation of atmosphere, in the way that they work towards a fullness of sound and sentiment. From the whistling wind that brushes the opening notes of "Sedona" with desert sand, to the fragile corporeality of the echoing "Gasoline", to the mewling samples that scratch and creak beneath the surface of "Darlin’" like the floorboards of an old bar, it’s clear that Houndmouth have a strong grip on the aesthetics of an almost universally recognisable genre, a knack for filling out the picture and adding an extra dimension. The whole thing may have an unabashed air of artifice and pastiche about it, but if you go looking for authenticity in white American rock and roll then you’re bound to be disappointed anyway. In word and sound Little Neon Limelight is an unashamedly backward-looking record, and it's all the better for it.