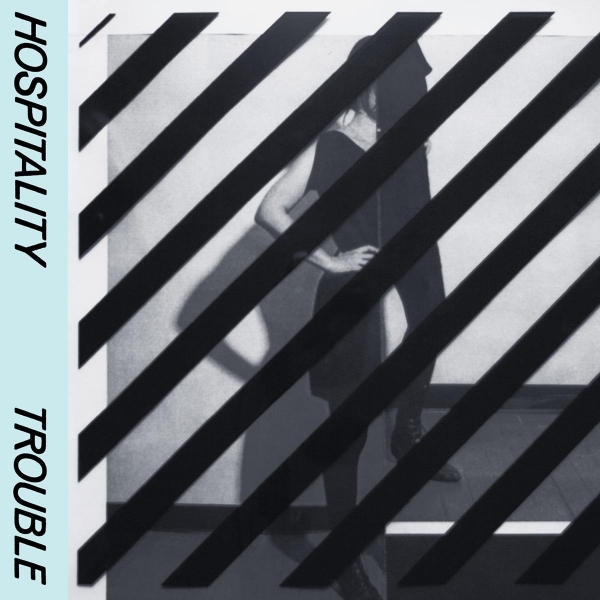 Two years on from their sadistic, brutal onslaught of doe-eyed cuteness and fawny indie-pop, Brooklyn trio Hospitality have come in from the cold with sophomore disc Trouble. Most will probably recall them as the band with Maeby from Arrested Development in their video (the track? “Friends Of Friends”), but there’s more than meets the eye on this new LP, and after sharpening their aural skills on the road, they’ve returned with a grander understanding of their sound – not just the notes they sing, pluck and strum, but the spaces in between too. As they’ve made clear, silence is their ‘fifth Beatle’.

Don’t be mistaken though, this threesome still commands the four basic twee elements: jangly guitars, pop hooks, sublime vocal coos and buttloads of pep. But alongside those moments of sweetness, there are shadows creeping into the frame. It’s a new dimension they display. On “Rockets and Jets”, they blend sharp post-(pop)-punk axe licks with spaced-out bouts of reverb á la Warpaint; imagine The Cure fronted by Reese Witherspoon. It’s a lot more experimental. There’s a malice streak in the indie-pop of their inaugural album’s evolved tone. “Nightingale”’s the same, drenched in a dreamy wooze-smacked fog, but instead of slipping into unconsciousness, the denouement of the cut ascends into an almost psychedelic state.

If Hospitality was a warm cosy nook-of-a-breakfast-diner, serving up bacon’n’eggs as a smiley face, staffed by little old ladies and everlasting smiles, then Trouble is markedly altered. It’s still hospitable, so to speak, but rather than a toasty, familiar safety, it’s more like a dilapidated hotel foyer in some rundown part of town somewhere around 3am. Instead of kindly dears, there’s a shifty, gangly Snape-doppelganger staring blankly at you (I’m aware that metaphor just ran away).

It’s not all doom and gloom. Well, none of it is really, and even as they careen towards moodier territory, it’s still pleasantly poppy. Some efforts are more akin to their prior endeavours: “It’s Not Serious”, a doo-wop revival, is more She & Him ballad than proto-goth or ’80s shoegaze. “I Miss Your Bones”, not shy in its discussion of loneliness, is sublimely bratty, with garage-rock flecks, but ultimately it foregoes the new standard of anxiousness and maudlin explorations in favour of squirmy guitars and gorgeous basslines. However, some tracks also sprint away from the majority of Trouble‘s sound, going further still – “Last Words” is brooding electropop, bearing resemblance to Ladytron or a clear-headed Braids. It’s like Hospitality are showcasing the past, present and future of their career.

A record that packages so many disparate genres together: garage-rock, electronica, twee-pop, indie, shoegaze, dreampop, acoustic ballads, folk, synthpop… it all gets a mite messy after a while. It’s nice they’ve got all these ideas and all, but perhaps a more vicious editing process would’ve weeded out these dramatic tonal shifts. On the whole, they’ve grown into a group very much worth keeping an eye on – they demonstrate a knack for so many areas it’s hard to predict where they may go in the next few years, although it’s a bit incoherent at times as the band schlep from one genre to another while still trying to hoist in their innate pop flair. This record’s a crossroads. There’s the big, well-worn path behind them, and numerous routes to potentially hurtle down. However, in that expanse of choice, they dilly-dally, never really deciding where to go.