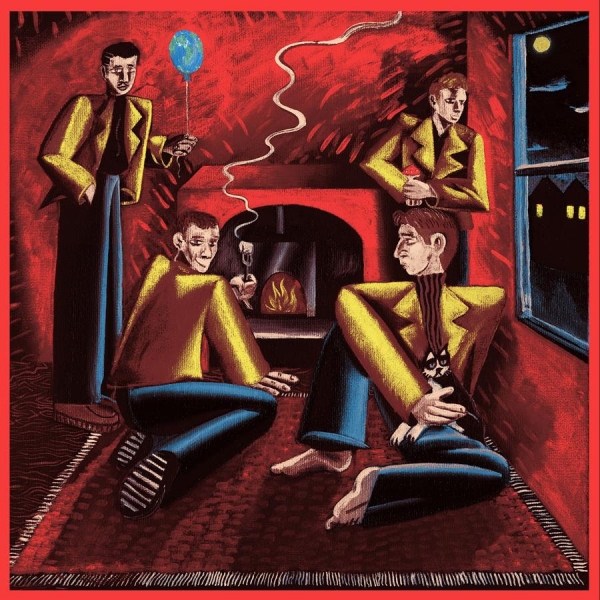 With their sharp, surreal lyrics, well-enunciated vocals and appreciation of styles including jazz and classical, there is something of the academic about Horsey. A wit to their style and interviews that evokes a particular charm, almost, as the record title implies, debonair. As heard on singles “Sippy Cup” and “Lagoon”, however, there is something else also on show. Something wilder, more unpredictable, and altogether more enthralling.

The counterbalancing between the ludicrous and the refined is there in every note played by the south London four-piece. While vocalist/guitarist Jacob Read opted for a sanguine, lo-fi style with his solo project, Jerkcurb, on Debonair Horsey emphatically oscillate between jazz, indie, post-punk, pop and a dizzying variety of other genres. Performing as if a spontaneous theatre troupe, their music is to be experienced in scenes, moods and characters, shifting from event to event typically within the same song. A patchwork of sounds rather than a singular, coherent tale, the flailing styles comprising Debonair are reminiscent at times of Titus Andronicus' meanderings, at others an overt, rather frantic Jack Peñate.

Opener “Sippy Cup” is a wondrous rolling of drums and splashes of keys and guitars, its brevity adequately compensated by its fervour. It’s on “Lagoon”, though, that the band achieve their zaniest, most gyrating track on the album. While its foray into soft electro-pop around midway through is a deviation Horsey would have been better off avoiding, the unruly indie energy expressed throughout the majority of the song is so wonderfully outlandish you almost have to laugh. Such a response is wholly intentional, and it’s quite unlike anything else I’ve heard this year.

Not everything is seen through this lens of drunken glee. Across much of Debonair, there is the sense that things could venture into more unpleasant territory at any moment, a threat which is fulfilled on multiple occasions. “Clown” distorts a classic circus aesthetic into a ghoulish grungey dirge, vocalist/guitarist Jacob Read going more Joker than Ronald McDonald, expressing a manic frustration and hatred at his occupation. On the piano-led “1070”, Read plays the role of a misogynistic, narcissistic male, sounding like an old baron, sat in his castle demented over the rejection of someone he supposedly loves, wailing into the void and burnt by his loneliness. Conceptually playful, and the only song here performed in its echoing, gothic style, it is also aggressive and confronting, an arresting take on gross male pride dressed in gloriously melodramatic garb.

Perhaps most menacing is the tempered and generally rather lovely “Underground”. Read tells the tale of his partner not moaning, nor cooking, nor a number of other actions due to his being, you guessed it, underground. Now either this person has partaken in the next mad rush and attempted to occupy not outer-space but a home within the earth, or, more likely, he has met an unfortunate end and is residing with the worms. Piercing closing piano notes suggest the latter.

It isn't until the closer however, "Seahorse", that Horsey play their strongest hand. Featuring King Krule on vocals, with whom the band are close friends, it is a song shaped by dark nights sat alone in bars, surrounded and comforted by the filth most punters avoid, not necessarily violent, but pervasive. Looming synths and guitars lazily swirl around King Krule’s trademark baritone, gradually, tenderly building into a tumultuous and bracing finale. Something of an aesthetic anomaly on a record brimming with divergent styles, it keeps Horsey’s ranging cast of characters and sounds surprising, demonstrating their commitment to keeping things varied and unwieldy to the bitter end. A commitment that, while at times requiring a cool head, also demands a serious amount of mischief along the way. For much of their debut, Horsey get that balance bang on.