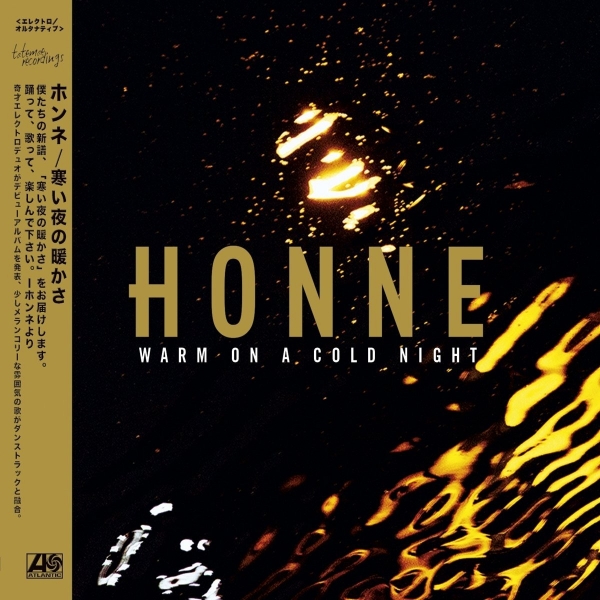 There’s a problem that seems unique to the modern music industry that I’m going to call EP Overload. It’s something that London duo Honne seem to have fallen victim to with their long-awaited debut Warm On A Cold Night.

EP Overload is what occurs when an up-and-coming artist releases so many EPs that it can have an effect on their debut album. It’s understandable why an artist would want to make their mark with a spate of EPs before finally diving into a record. Most of it is down to funding an album or garnering a solid fan base in time for the LP, and that’s all well and good.

But in the case of EP Overload, it often means we’ve heard so much of an artist already, that the album has to be much different to tell us anything new. It’s a problem that afflicted Banks’ 2014 debut Goddess, which featured a number of tracks pulled from her EPs. Of course, for someone just discovering her, it made no difference because they were hearing these fantastic tracks for the first time. But those looking for something new were mostly disappointed (although Goddess did feature a few equally fantastic tracks that tried to break from the mould).

In this case, the debut album almost becomes the second album; a time to expand on ideas or run with them in a completely different direction. Yumi Zouma, who were prolific in their release of EPs, were successful in doing the former with their debut Yoncalla, which marked itself out as its own entity. Honne, however, seem to have rested on their laurels a bit with their debut Warm On A Cold Night. We don’t discover anything new, both about HONNE or about their capabilities as musicians, and it’s slightly disappointing.

That being said, there’s no denying that the tracks we have heard already across the four EPs that set up HONNE as the late-night smooth talkers are still excellent. The funky basslines and Prince-esque noodling guitar solo of “All In The Value” is still a riotous little treat, while the sexy late-night croon of “The Night” aches with yearning and the promise of a blissful future.

Even the track that started it all back in 2014 with that crackle of the radio, “Warm On A Cold Night”, retains that gorgeous neon-cool we all fell in love with. Just like the film that inspired the duo to start making music together, Lost In Translation, they are a band that can ooze cool and mystery with a profound sense of longing in equal measure.

It’s just frustrating to think that their last EP, Gone Are The Days, showed a new direction that just isn’t capitalised upon here. Gone Are The Days, with its gorgeous feature from JONES, and the Jungle-esque euphoric title track, managed to breathe new life into the HONNE formula. But the new tracks on Warm On A Cold Night follow the same old HONNE formula, and it’s hard not to feel a bit crestfallen.

There is promise, with the gorgeous choral addition in both “It Ain’t Wrong Loving You” and “Good Together” adding some much needed depth, but the new tracks don’t really show us a side of HONNE we haven’t seen before.

Of course, like with Banks, newcomers to HONNE will find a lot to love here. It’s an album chock full of the tracks that made us fall in love with them in the first place. Sexy late-night fumblings, romantic drives along the coast, early-morning contemplations. They’re all here, and they’re all done exceptionally well. But, for people who have already fallen for HONNE’s whisperings of sweet nothings, there’s just more of the same. It’s an album that needs something more; something fresh to mix up proceedings.

If the EPs were the cutesy texts back and forth, the late night phone calls, the fliratious Snapchats, Warm On A Cold Night is the awkward first date where no-one is quite sure what to do so they stick to the tried and tested patterns. Not bad, but not earth-shattering. Let’s just hope they really pull out the stops for that second date.