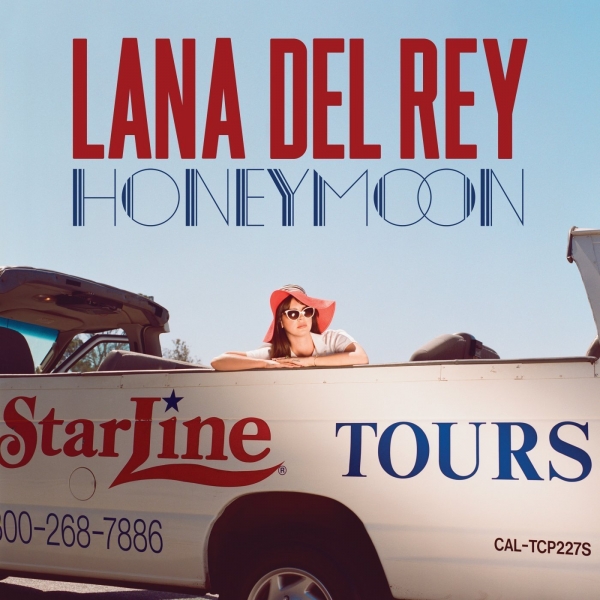 The opening words to Honeymoon, Lana Del Rey’s third album proper are “We both know that it’s not fashionable to love me”. It’s an apt description of her relationship with the characters that inhabit her songs and her critics. It’s also a gloriously insouciant way to open her most realised and beautiful record to date.

Despite creating a legendary viral stir with “Video Games” in 2011, by the time she released Born To Die, questions were being asked, namely who the ‘team Lana Del Rey' pulling the strings were (as surely she was too good to be true) and whether she was an anti-feminist.

The proof it was all apparently a hoax was confirmed for some when it emerged she’d already released a record under her real name Lizzy Grant. Some of her utterances at the time didn’t help - the ‘Gangsta Nancy Sinatra’ self-description was try-hard compared with the effortless grace of songs such as “Summertime Sadness". However, when she released its follow-up Ultraviolence the tide seemed to turn.

Yet even then she found herself damned with faint praise. One broadsheet described her as an “equal-opportunities misanthropist”, but that missed the key point of the music - what underpins her songs is the four letter word that is love. And love is all over Honeymoon. Significantly, unlike Born To Die with its myriad of producers and Ultraviolence, which leaned on Dan Auerbach’s wonderful production, Honeymoon feels more autonomous and as a result she’s never sounded better.

The opening title track finds her in love, albeit it not of the perfect kind. With her voice drawling and rich, accompanied by huge strings and piano, it sounds like she’s got John Barry on arrangement duties and it's the first of many songs here that makes one wonder why Sam Smith was given the Bond theme. But love isn't always complicated on Honeymoon; the lovely “Freak” compares it to an endless summer ("Come to California, be a freak like me"). But underlying such abandon is a desire to turn her back on fame and enjoy a simpler life, which turns out to be where Honeymoon’s story is headed, as the cover shows, she’s potentially heading out of town forever.

“Music To Watch Boys To” - originally the title of the album – is a marvel. Starting with a line that recurs throughout the song ("I like you a lot, so I do what you want"), musically it’s trippier than anything she’s ever done, with the lean strings and clarinet making it sound supremely lush. Yet love's ephemerality rears its head ("nothing gold can stay").

She plays clever tricks with her influences throughout Honeymoon. “Terrence Loves You” is a slowed down version of the James Bond score for You Only Live Twice, bringing the Nancy Sinatra reference, who sang its title track, full circle. Featuring minimalistic Erik Satie-like piano and jazzy sax it still manages to sound vast. Ever the post-modernist, she mischievously steals David Bowie’s "Ground control to Major Tom" line and again explores love's melancholy side. The words “I lost myself when I lost you.’ sound incredibly heart-broken.

For all the orchestration she hasn’t abandoned her love of hip-hop however. “High By The Beach” has an irresistible funk to it and she sounds marvellously dismissive of the bad boys she previously swooned over. "You could be a bad motherfucker, but that don’t you make you a man, now you’re just another one of my problems". It ends with a dismissal of romance, “Everyone can start again, not through love, but through evenge.”

The answer to such heartache seems to be to turn her back on her art; “Swan Song” would have been the perfect ending to the records narrative. ("Why work so hard when you could just be free? You’ve got your money now, you’ve got your legacy".) It sounds like a parting shot, quite literally so with the words "I will never sing again". As a result the closing cover of “Don't Let Me Be Misunderstood” is a slight misstep. Despite its composed delivery it feels like the music on the closing credits of a film rather than part of the main story. But that’s a minor gripe on what is an assuredly dazzling trip,

It’s interesting that even in 2015 a brillliant male artist like Father John Misty can write a beautiful record like I Love You, Honeybear and be feted for his honesty, yet when a woman tackles similar themes something's amiss. Yet ultimately Honeymoon debunks the idea that Del Rey is feminism’s anti-hero; it’s instead simply a story of love and all of its consequences, regardless of the gender of its writer.

Del Rey has that uncanny ability to sound both modern and retro at the same time but walks a very singular path. So let’s hope this isn’t adieu but an au revoir, because Honeymoon reaffirms her ability to make important, masterful pop music that doesn’t pay a blind bit of notice to fashion and it's all the better for it.