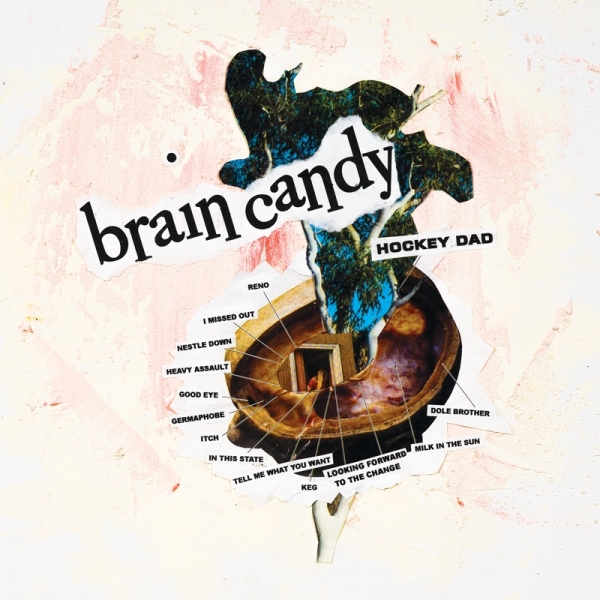 For Australian duo Hockey Dad, the third time’s the charm.

Their third album Brain Candy is exactly that, a vibrant and digestible yet existential and thought-provoking treat. Childhood next-door neighbors Zach Stephenson and Billy Fleming have not outgrown the garage rock they created together in Dad’s back shed, and instead built upon it. The record was produced in Seattle by John Goodmanson (Sleater-Kinney, Bikini Kill, Death Cab For Cutie) and mixed by Troy Glessner (Alice in Chains, The Blood Brothers, Foo Fighters). It’s a perfect balance between the gloomy yet rough-around-edges alt rock of the dark and cloudy Pacific Northwest and the carefree sunniness of small town, coastal Australia. Brain Candy exhibits an experimentation with sound and genre, along with a poetic commentary on the world around the duo and the experiences that they have gathered through the years.

The record bursts out of the gates with its first two tracks, singles “In This State” and “I Missed Out” - both playful yet poignant reflections on love, loss, and regret. Hockey Dad also released ballad “Itch” as a single, a heartbreaking plea for someone distant to get under their skin. It’s an examination of the human desire to so desperately want something that you know won’t be comfortable, but that you feel as though you can’t live without.

“Good Eye” is a self-assured turn. The single makes it crystal clear that Hockey Dad has a “Good Eye” and won’t be deceived by anyone trying to fool them. However, they’re unafraid ofplaying their flaws out loud on “Germaphobe,” an ironic release in the midst of a global pandemic. It’s a visceral examination of comfort zones, leaps of faith, and the balance between succumbing and overcoming.

A moody bassline leads the way into “Heavy Assault,” a lonely Nirvana-esque plea for serotonin. Crashing cymbals and melodic guitars build a sense of hope over the chorus, and a desire to make things better. “Nestle Down” and “Tell Me What You Want” show the most of Hockey Dad’s roots in beachy garage rock jam-packed with nonstop guitar riffs with punky basslines and clashing percussion.

“Dole Brother” opens with the country-rock essence of the Rolling Stones but with a sound that remains distinctly Hockey Dad: psychedelic and poetic lyrics, steady guitars, and a surf-rock energy. Hockey Dad also respects the age-old guitar solo on this track, rambling over the bridge in a way that makes sense but also harbors the spontaneity of the instrumentals at a Grateful Dead concert. They continue their country-infused rock on “Keg,” a mellow, western-tinged lamentation about the impossible task of getting someone off your mind. Similarly, jazz-glazed “Reno” is a slow and nostalgic acknowledgement of human limitations.

Brain Candy ends on a slow-paced note with “Looking Forward To The Change,” a moody yet hopeful ballad that rewards us at the end with a crescendo of banging drums and shredding guitars. It details mundane struggles of every day, but also looks forward to something better on the horizon - a direction we need pointed to us now more than ever. With its specificities, it leads the listener to look introspectively on their own lives and the things that are holding each of us back. The record asks us to look in the mirror and see what we can do better, leaving us with something to think about even as the reverb of the guitar fades out at the end of the song.