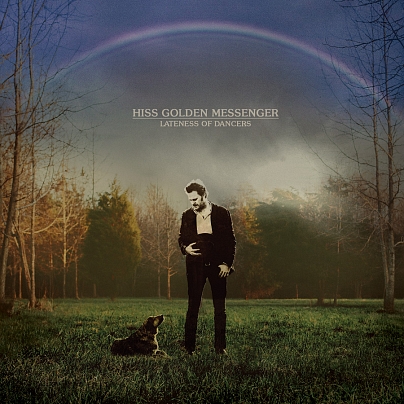 No one likes to be blue, but songwriters and sadness have been getting along famously ever since humans first decided to bare their inner feelings to the accompaniment of a stringed instrument. In songwriting terms, heartbreak, struggle and strife seem to lead to musical alchemy much, much more often than happier fare, which is often relegated to the lowly status of – at best - pleasant if slight holding operations to be bobbed up along to until true (read: blue) inspiration strikes again.

A sunnier proposition than its often brooding, justifiably praised predecessors, Hiss Golden Messenger’s fifth studio album refuses to accept that doom and gloom alone equal goodness. Centred on songwriter MC Taylor and multi-instrumentalist/producer Scott Hirsch (musical companions since the widescreen, underrated California outfit The Court & Spark), the North Carolina collective’s past output has cultivated scenarios that balance precariously - and deliciously - between the dust-blown realism of the here and now and timeless myths spelt out in language that would be right at home on the pages of a yellowed-out paperback bible. Set to music that’s big on folk, country, soul and other staples of US music history but refuses to yield to genre boundaries, theirs is a rootsy yet open-eared sound that could be described as Alt. Country, had that not become shorthand for unadventurous replications of tricks perfected back in the day by Gram Parsons and Neil Young. So let’s call it Classic American Music instead.

While hardly entirely untroubled, Taylor’s songs are painted with a brighter palette this time around. Themes of family, finding and consolidating a home and growing older but not necessarily wiser keep cropping up. It’s hard not to read Lateness of Dancers as a more intensely personal offering than past HGM offerings, with any potential cosiness and staidness suggested by the issues at hand offset by just the right amount of doubt, restlessness and a compelling air of mystery, even if we don’t quite hit the heights of past triumphs such as “Jesus Shot Me In the Head” (Poor Moon, 2011) or “Sufferer” (Haw, 2013). That said, the magnificent “Mahogany Dread” comes close: an uncommonly successful ode to parenthood, as well as a love song interested in a long-term relationship’s middle and main part, rather than the woozy beginning or the bitter end, it’s proudly adult without being, you know, adult-orientated.

At times, Lateness of Dancers doesn’t so much toy with Americana cliché that Taylor has studiously avoided in the past as fall headfirst into its alluring arms: whisky is drank, mandolins are left in the rain and inspirational if compromised figures play guitar in bluegrass bands. However, in the context of the easy-rolling “Saturday’s Song” - a very compelling candidate for the all-time A-list of songs that champion the release offered by a long night on the town, even if Sunday morning will inevitably soon come down - and the sparse, sleepy-eyed “Black Dog Wind (Rose of Roses)”, the oft-repeated tricks become convincing tools of a talented writer’s arsenal, rather than invitations to switch off.

Strong as the songs are, it’s the rich musical settings that really hit hard. There’s a lot going on here, but the ingredients are dished out so economically that the results breathe freely where they could easily have become cluttered in less capable hands. Just check out how the guitar shadows Taylor’s vocals with a genuinely enriching impact on “Mahogany Dread”, or how the barely-there minimalism of “Day O Day (A Love So Free)” - subtle echoes of Moondance by Van Morrison, whose productivity and strike rate during the early 70’s HGM are seemingly emulating - shimmers ever-brighter with every verse. It’s not all sweetness and light either. The lyrics to the terrific title track pay tribute to the transforming powers of true love, even as the turbulent, restlessly swirling music seems to suggest that storm clouds - possibly of the protagonist’s own making - are never far away.