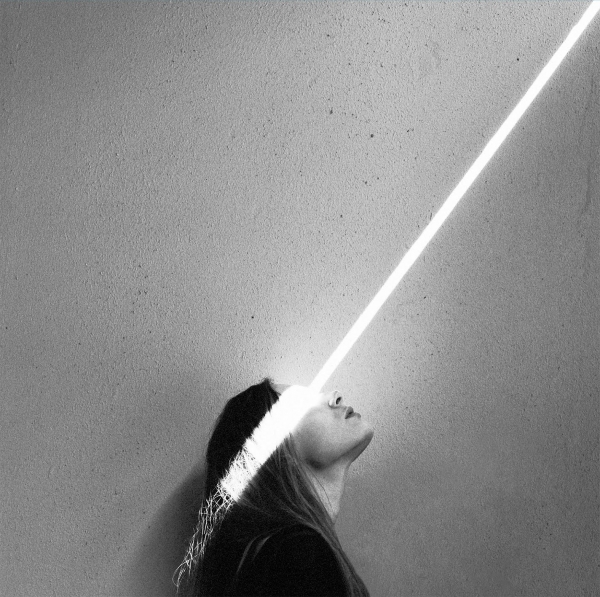 Highly Deadly Black Tarantula could very well be the title of a long-forgotten B Movie: a sci-fi spectacle whose plot preys upon our primordial fears — and our inexplicable attraction to them.

Though Teeth of the Sea’s fourth record is devoid of any horror kitsch or cartoon gore, it is propelled throughout by a chilling and captivating psychic darkness, a kind of inverse transcendence that traverses the gradient between rumination, dread, and terror.

The London-based quartet released their debut, Orphaned By The Ocean, in 2010 to both acclaim and discordance — the thorny question of their genre affiliation couldn’t easily be resolved by critics. “Psychedelia” was the descriptor most often assigned to them, though it can’t possibly account for their audible Prog and Krautrock influences, or their erratic noise invocations. Their second album, Your Mercury, was strewn with contorted Post-Rock motifs, but the dual prominence of auditory clutter and brass player Sam Barton’s lithe trumpet lines only made attempts at situating the group within established musical taxonomy seem arbitrary. With each release, Teeth Of The Sea grow more restless, continually infusing their approach with greater tension and disorder; the incorporation of looped electronic rhythms (read reluctantly: “beats”) on 2013’s Master marked their decisive deviation away from ‘rock’ music. Highly Deadly Black Tarantula is a continuation in this vein—all industrial rhythms and uneasy ambiance. It often staggers toward cathartic release and retreats, leaving listeners bracing for an impact that never wholly materialises. Its effect is a cumulative malaise.

Opener “All My Venom” is populated by iron clad apparitions; scythe-sharp guitar riffs fracture static drone harmonies, and a sense of foreboding ebbs and flows accordingly. Simply put, it never feels as though a full-blown breakdown is at hand. For the time being, Teeth of the Sea are content to ruminate on the edge of chaos, with rhythms of progressive urgency building and cresting at a pace that belies their intensity. However, the ruthless techno loops of “Animal Manservant” don’t prove to be as reticent and, when merged with a sample of muffled primal screaming, the track ascends to a deranged apex not attained again for the remainder of the record. Now, more than ever before, electronics constitute the pulse of Teeth Of The Sea’s music — and this is the kind of throbbing that echoes in your ears the very instant you realise you’ve got to fight or flee.

“Field Punishment” is pathologically glitchy: it begins with the structured union of an (almost) orthodox danceable beat and a sci-fi synth riff and intermittently dissolves into the sonic equivalent of an electric shock.  The strangeness of its construction—complete with trumpet flourishes and the occasional atmospheric guitar phrase — is paradoxically deconstructionist, more collision than collation. It’d be convenient to brand Highly Deadly Black Tarantula “unique” based on its unusual amalgamation of tones and textures, but it isn’t that simple — you get the sense that the band don’t contrive these matches for the sake of sensory provocation alone. Pixel by pixel, Teeth Of The Sea are assembling a familiar dystopia: part London commute, part Orwellian fever-dream — all a critique on the vacuousness of unrelenting sensory input.

It isn’t any wonder that the record’s seventh and final offering, aptly titled “Love Theme For 1984”, begins with nothing but the sound of someone panting as he catches his breath. “Phonogene”, the track that precedes it, is simply a minute-and-a-half of white noise— fractured voices, staccato blips, radio crackling, etc. In the aftermath of an album’s worth of auditory convulsions, disorientation is bound to have settled like a fog. While “Love Theme” is as prone to the use of cyclical electro themes and distorted, disembodied voices as its predecessors, it also features moments of much-welcome Post-Rock reverie. The contemplative instances of guitar/brass harmony early on are the closest the record comes to being emotionally didactic. And when a resonant bass note strikes from within an ethereal chorus of synths, it becomes evident that this is not the band’s conciliatory attempt at crafting an accessible song. There is depth and ambivalence here, even when the timbre shifts from violent to poignant. In the end, it all fades to static without so much as a discernable whimper.

What narrative is there without language? Without a designated, visible protagonist? With Highly Deadly Black Tarantula, Teeth Of The Sea sketch a framework of themes without ever having to bow to platitudinous detail. This is, in part, why their songs feel so expansive: through a confluence of de-contextualised motifs they are able to access subliminal storehouses. Thus, a vicious beat equates to uncertainty in the face of modernity and imperceptible voices mirror ubiquitous chatter. Black Tarantula is a commentary at the preverbal level; it takes the fears we can’t articulate and sings them to us in our own voices.