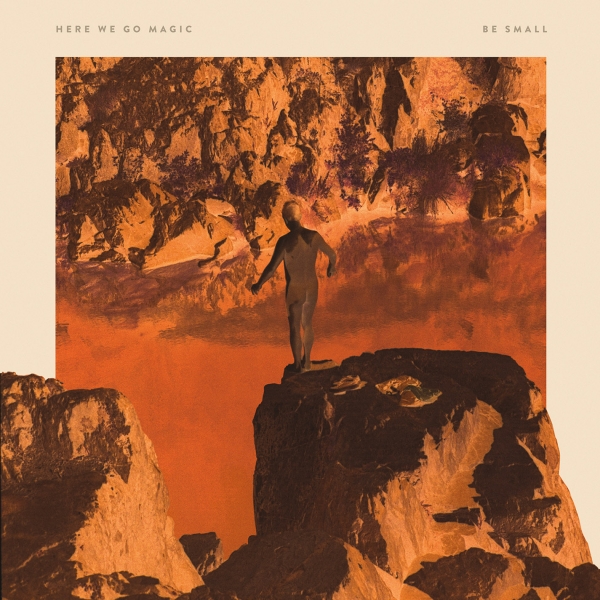 The tone of Here We Go Magic has shifted profoundly — and not just in the musical sense of the term. Where their last release, 2012’s A Different Ship, was cool and austere, Be Small is (for better or worse) warm and inviting.

Legend has it that the band were playing a sedate early morning set at Glastonbury 2010 when, through a sea of hangovers and comedowns, they noticed a couple of guys in the crowd dancing rather passionately. Turns out the cheery twosome were none other than Thom Yorke and Radiohead producer Nigel Godrich. The latter was so taken with the group’s groove-heavy take on dreampop that he asked to produce their fourth album. The result was the hyper-sophisticated A Different Ship, which saw sonically noncommittal bandleader and songwriter Luke Temple get comfortable in the vein of Grizzly Bear-style chamber-pop.

Three years down the line, Here We Go Magic has morphed beyond recognition; the one-time five piece has been reduced to the duo of Temple and longtime guitarist and collaborator Michael Bloch. Be Small bears a greater resemblance to any one of the myriad chillwave albums that emerged toward the end of the noughties than it does a prior HWGM offering. The record begins with a thirty-second clip of what sounds like a jet engine starting up — it’s a bit of an incongruous initiation into the sweetly melodic, reverb-drenched affair.

At first listen, this is probably the most viscerally accessible thing Temple has ever masterminded. “Stella” touts a bright and jaunty synth theme with vocals poured slow as molasses over the top: it’s likeable, but ultimately difficult to determine whether anything more complex lies beneath its saccharine exterior. Be Small also sees HWGM becoming increasingly dependent on hooks and earworms; “Tokyo London U.S. Korea” has Temple repeating the names of four destinations on loop with only glimmers of lyrical context to connect them. However, “Candy Apple”— an unabashed ode to the city of New York complete with ubiquitous harmonies and plucky electric guitar flourishes—is the prime illustration of his newly embraced pop sensibilities.  A mellifluous refrain (“here in the New York City / it’s just like anywhere”) ensures that the track reverberates at the same high-energy frequency throughout.

None of the pointed and polished sound that Nigel Godrich is so apt at engineering is discernable on Be Small; there isn’t any of the spacious darkness of Different Ship gems like “Over the Ocean”. Instead there is a kind of sunny monotony, wholly enjoyable and airy without much weight to it. “News” is the kind of song you have to hum under your breath to excise it from your brain; here, among hazy harmonies and lilting mid-tempo hooks, Temple showcases a technical mastery of the dreampop form. The only time he deviates from this mode is on “Ordinary Feeling”: an acoustic ballad that has him assuming something of his former vocal inscrutability before the song slides into a blissful chorus hemmed with subtle synth swirls. It’s a brief moment of subtlety that sets itself apart from the record’s busier numbers.

Historically speaking, Here We Go Magic is not a group renowned for its consistency. Temple has never really been able to settle in a genre niche for long—the project has no “signature sound”. Therefore, it’d be unfair to say Be Small is a detour in an otherwise clearly-defined career path; it’s simply another exploration. And while it’s a technically accomplished offering, it isn’t always compelling. That said, Temple’s chameleonic tendencies make it unlikely that he’ll release an album in this vein again. With that in mind, it’s best to enjoy Be Small for what it is: charming, skilful, and pleasing to the ear.