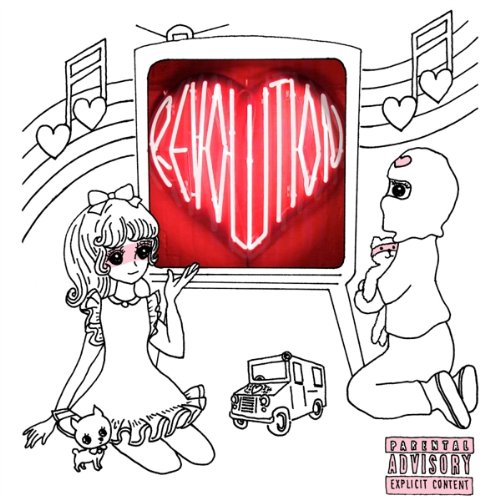 The warped chimes to Ride Or Die’s introduction “Iscream Bomb” are more than just coincidence or a random idea plucked from the air. New York’s Heartsrevolution – guitarist and keyboardist Ben Pollock and vocalist Leyla ‘Lo’ Safai – travel between tour dates in an ice cream van, every inch of it covered in Swarovski crystals, including some passed on to them from Michael Jackson’s estate following his death. As well as selling merchandise and popsicles – naturally – from the “Pop He(art) Truck”, it’s passengers can include stuffed animals which are then hung for a project called “Street He(art)”. So far there are over 2000 hanging in cities including NYC and Tokyo, which act as metaphors for childhood dreams. And it’s with this edgy take on playfulness that Heartsrevolution’s debut LP is presented.

Lead single “KISS” offered pure pop with hints of dance and punk thrown into the mix, almost like one of Phil Spector’s girl group numbers from the 60s, travelling through the decades and picking up influences from each of them. “Sooner or later I’m gonna get you, sooner or later I’m gonna let you down…” Lo croons over a simple beat (very The Ronette’s “Be My Baby”) before the keys and guitars pick up in one of the few moments where the blend is almost 50/50. Elsewhere, the majority of the tracks can be divided into two camps, with one half focussing on dreamy digital soundscapes and the other on in-your-face anthems. ‘Brillianteen’, however, is one that opens in the key of “KISS” – this time channelling Nancy Sinatra during the intro – before electronics creep in and Lo’s lyrics flow faster, “calling out to the daydream nation” about subjects including a “ping pong pussy like a son of a bitch”.

The angst of the band fuels the title-track (opening with the declaration “Excuse me – I’ve got something to say”) and “Kill Your Radio”, both of which are built on grungy layers of guitars and Madchester-like keyboards. Unfortunately, the output’s a little Ting Tings - more specifically their second album – and not completely convincing. “Vertigo” channels The Strokes (particularly during a soaring guitar solo), allowing for a more natural edge, and where lines including “Fuck the game, it’s all who you know” are still delivered with the mischievousness that’s clearly second nature, while “Heaven’s Gate” is a theatrical number, with an almost Jim Steinman take on songwriting. When the band focus on their digital core, the songs are atmospheric, playful numbers with some verging on chillout and others on B-movie stories (“Heart Vs. The Machine”, with lead vocals from an authorities female computer voice.)

“Kishi Kaisei” – representing the duo’s Japanese influences, which could previously be heard on the Japan EP – is rich in synths and dripping in dance beats, while Lo sings “Put your hands in the air and wave them around like you just don’t give a…”, highlighting how Heartsrevolution take pop methods and give them a pinch of punk. The ‘revolution’ in their name isn’t by coincidence, either; “Generation Wh(y)” tackles war and how “there’s no forgiveness unless you’re willing”, while closer “We Out…” points out that “revolution doesn’t happen in a day.” The uprising has arrived; in a diamond covered, teddy filled, pop-music playing ice-cream truck, and it’s never seemed more achievable!