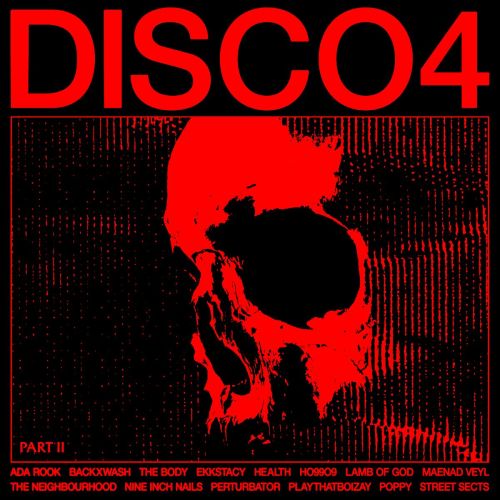 Featuring instantly recognisable names in the heavy music sphere, as well as fresh talent on its way up from the underground, DISCO::4 Part II is the sound of the disconnected seeking connection, fueled by thudding beats, brooding lyrics, primal screams and shadowy synth textures.

The follow up to 2020’s Part I, HEALTH’s second installment is an apt soundtrack for what feels like the end of days. Fleshing out this feeling with their trademark explosive drop ins, industrial beats and haunting vocals, the band absorb the individual energies of each of their collaborators, merging them into a body of work that thrives in the dissonance. Whether they’re swirling in the petals of “DEAD FLOWERS” with Poppy, shuddering under the weight of the synths on the supremely cynical “ISN’T EVERYONE” with Nine Inch Nails, or thundering into the metal void in “COLD BLOOD” with Lamb of God, HEALTH do so with unrivaled tenacity.

At times subdued, and at times pulsing with palpable unrest, DISCO::4 Part II shines a spotlight on some of the artists who are redefining what heavy music is too. Ada Rook’s cord-ripping screams and PlayThatBoiZay’s visceral rapping hit hard on “MURDER DEATH KILL”, whilst the murkiness of “GNOSTIC FLESH/MORTAL HELL” is punctuated by the raw voices of Polaris Prize winning rapper Backxwash and inimitable punk-rap duo Ho99o9.The pulsing, feverish energy of “IDENTITY” with Maenad Veyl flows in a similar, irresistibly ominous vein as the brooding “EXCESS” which features HEALTH’s upcoming tour mate Perturbator. HEALTH show their more atmospheric side with previous tour mates The Neighbourhood on “NO ESCAPE”, and delve into techno territory via crystalline beats on “THE JOY OF SECT” with the aid of Street Sects.

More sparse, fragile offerings come courtesy of the apathetic “STILL BREATHING” with Vancouver teen EKKSTACY, the desolate sounding “AD 1000” featuring The Body and HEALTH’s solo offering “THESE DAYS”. It’s a melancholy lament that touches on the fluctuating nature of memory, time and grief, ending the album on a tender, evocative note. Whilst at times DISCO::4 Part II might feel morbid, its urgent, vital sounds provide a much needed antidote to the anxieties of the world we currently live in. It’s also further proof that HEALTH’s talent and appetite for collaboration is as potent as ever.