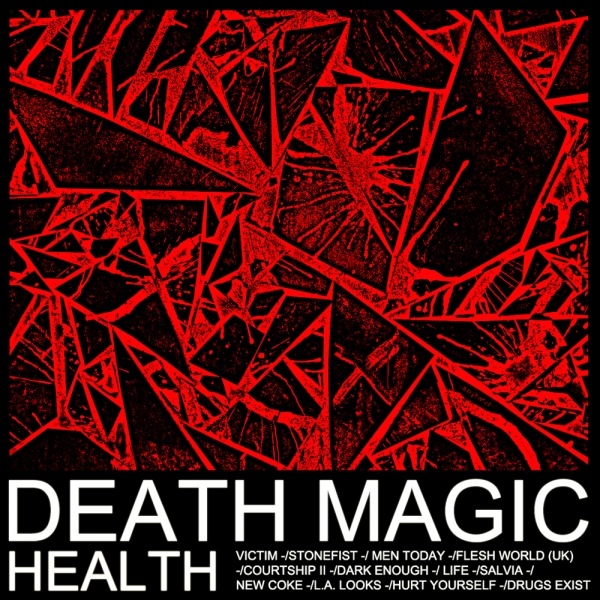 Death - the great equaliser, the unknown, the abyss. Musically, over the past six years, many bands, and even scenes, have sunken into the darkness.

To quantify the six years HEALTH have taken between Get Color and Death Magic, bassist John Famiglietti amusingly stated in an interview with Pitchfork, “Witch house came and went”. Even bands from the LA Smell Scene, from which HEALTH emerged, have died slow and protracted deaths. Yet even in their silence (bar the release of OST Max Payne 3), HEALTH have remained surprisingly relevant. And with the release of Death Magic, HEALTH prove they are undoubtedly vital.

Death Magic is unmistakably a pop record, with the proviso that it is created by a noise band. It completes a transition that was partially earmarked in Get Color and then well and truly signaled with the release of their cover of Pictureplane’s “Goth Star”. It’s position/personality as a pop record can be found within a lineage of records that have often taken underground and more inaccessible movements to create popular tangents. Death Magic can be seen as analogous to the likes of Depeche Mode’s Construction Time Again or Black Celebration; and Nine Inch Nail’s Pretty Hate Machine, which tempered and molded desolate, industrial soundscapes. HEALTH on the other hand have looked upon noise as their weapon of choice.

Its creation can be characterised by two thematic elements: deconstruction/reconstruction; and consumption. Fans, or those familiar with HEALTH’s career, will hear sonic reference points including shards of noise that intersect the more melodious moments; Benjamin Jared Miller’s rolling toms; or the Indominous-Rex processed screams of Famiglietti and lead singer Jake Duzsik.

It is however the way HEALTH have torn apart their sound and realigned the fragments that serves as one of the most fascinating and satisfying storylines of Death Magic. Noise frequents many of the tracks over its forty-minute playing-time, but not in the way found on much of Get Color or their eponymous debut-record. Their unholy noise has undergone a purposeful deconstruction - torn from all expectation - and its creators have used the salvage to create anew. The effects-ridden elements are now used as the key foundations to the “pop” structures found and also act as sonic counterfoil to more FM-friendly moments. “Stonefist” for example follows a discernible structure as it moves between verse and chorus, but its chorus is built on shocks of barbed synths.

Seeping throughout Death Magic, one can also find the band’s consumption of musical and cultural trends. Much of the rhetoric surrounding the release of Death Magic from the band themselves has focused on what they describe as a musical “arms race” - the need to have the coolest, freshest sound. HEALTH evidently have consumed not only the shift in dance/bass music but have also feasted upon a pop landscape dominated by the likes of Rihanna, Perry, Swift et al. Coupled with their work for the soundtrack of Max Payne 3 and appreciation of performances from the aforementioned Depeche Mode and Nine Inch Nails, HEALTH have produced a record that breeds a confident and coherent progression to their brand of noise. They have created a pop record built for a doomed generation.

At the centre of Death Magic, one will find two songs as sumptuous as anything HEALTH have ever laid to record - “Dark Enough” and “Life”. Both possess a propulsive and insistent shuffle, gluing the array of textures, reflective sounds and noise samples together. “Life”, with its tongue-twisting, ear-worm of a chorus is a joy to experience. Synths reminiscent of “Die Slow”’s opening statement brood in the background, while Duzsik affirms “Life is strange/But it’s all we got”. The prismatic “Life” also crystallises many of the existential lyrical paths trodden on Death Magic. “Dark Enough” examines cold-hearted and apathetic emotions with a questioning, “we cheat/so what?” and “does it make a difference how I feel/as long as I come back to you?”.

The album closes on a further statement of pop intent. “L.A. Looks” bounces joyfully with an 80s new-wave indebted bass line, pushing HEALTH into the realm of the insatiably danceable. Whilst “L.A. Looks” beams delight, its subsequent siblings “Hurt Yourself” and “Drugs Exist” are stark and affecting beings. The former rises with choral-like samples, whilst the latter is built upon a staccato, scatter shot synth line. The lingering and sobering synth that closes “Drugs Exist” soundtracks the comedown after the post-apocalyptic parties of “Flesh World (UK)”, “Courtship II” and “Stonefist”.

Dance music’s direct influence, in particular the rise of EDM, can be found throughout. Filtered and muted, a four-to-the-floor unfurls “Hurt Yourself” for example. Its greatest influence however can be found on “Flesh World (UK)”. Originally debuted circa 2013, its locomotive rhythm and persistent four-to-the-floor herald a new dynamic to HEALTH’s songwriting. Rising electronics majestically engulf before parting to a flurry of snares, as Duzsik exclaims “do all the drugs/we die/so what” and “we’re not here to find ourselves”. His ambivalence towards mortality is also an interesting and striking contrast to the nervous pondering of the after-life in “Life”. It marks a fitting soundtrack for a generation overtly keen on its ultimate goal - “having a good time”.

Lead singles “Stonefist” and “New Coke” both serve as excellent examples of the record’s sonic palette. For one Duzsik’s new crystalline, androgynous vox is found high in the mix. The mechanical hi-hat shuffle found on “New Coke” is also characteristic of much of Miller’s percussive work throughout the record, amongst the gargantuan war-drums that sound as Duzsik exclaims, “Let the bombs explode”. Both also showcase newfound pop motifs layered with dynamic noise. The tight curation of the record is not solely confined to the presentation of its lead singles but also found within opener “Victim”. Co-produced by The Haxan Cloak, it opens as the cinematic statement to the record, before triumphantly piercing uncomfortably shrill frequencies through Duzsik’s synthesised vocal.

Although HEALTH luxuriate within the pop realm on Death Magic, they continually remind us of their noisier personality. Be this within the aforementioned textures, sampling or during full length aural bombardment. “Salvia”, informed from the dramatic shoot-outs of Max Payne 3, brutally ceases the record’s slower mid-segment with crazed percussion akin to the furious drums rolls of “Crimewave”. “Courtship II” also follows on from its named predecessor with pulsating bass as Duzsik sings “You hurt someone”. Growing in monstrous stature and building to a threatening and claustrophobic finale, Duzsik’s kaleidoscopic voice closes the track with the lucid, “we dream colours”.

“Men Today” furthermore opens with the rolling toms of previous HEALTH records, spliced by violent noise and distorted screams. It also underlines the continual battle between light and dark found on Death Magic both sonically and lyrically. Duzsik’s vocal shines as an angelic and brilliant beacon of light, through the thunderstorm created around him. The record’s careful production successfully balances these sharp dynamic shifts and contrasts with poise and aplomb.

Duzsik, on Death Magic, tackles existential notions of life and death with varied effect. HEALTH must be commended for employing a narrative that questions the moral and immoral; revels in the hedonistic and nihilistic; and at times questions the unanswerable - the nature and purpose of death. One however should not expect Kafka-esque wordplay and some may find the rhyming scheme employed irritating to a certain extent. “Life”, for example, builds to the somewhat unprofound “We die and we don’t know why”.

Those expecting an unruly, chaotic album of noise may be disappointed - expectation and the failure to meet it will do this. Their absence, which will only have heightened this expectation, can be perfectly summarised by the band themselves: “We played with Iceage when they brought us over to Copenhagen for a DIY show in 2011, and now they have three albums - and we don’t even have three albums”. But unlike several of their peers (Iceage excluded, mind) who have rushed records, HEALTH have diligently crafted an astounding pop record...one which could be enjoyed for the next six years, if necessary.