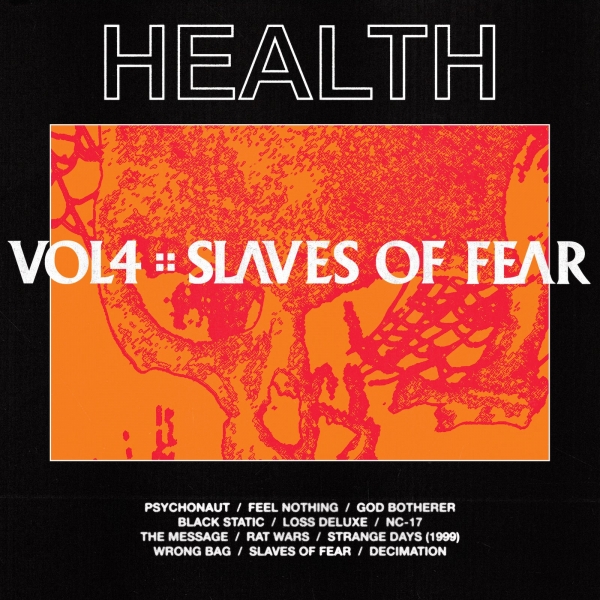 Through the medium of abrasive beats and tortured, explosive synth textures the band tackle the world’s uneasy conscience, resulting in a remarkably cathartic listen.

The new album is HEALTH’s first full-length release since 2015’s Death Magic, and whilst the two records have a similarly powerful, visceral sound; lyrically, their latest work is a more sobering affair. Opener "Psychonaut" makes this clear from the offset - the cutting line ”I’m only here once, once is enough” resonates across the manic synth patterns that permeate the song. It bleeds in to "Feel Nothing", which grinds the senses in to apathy via pulverizing beats and heavy synths..

HEALTH’s indifference to human ignorance continues on "God Botherer", with its piston-like drums and haunting, omnipresent vocals; making it feel like an electronic intervention.Themes of isolation and paralysing clarity flood the record, and "Black Static" is no exception with its doom-style riffs and bleak lines like “I wasn’t worried before I was born, why would I worry after I’m gone?”. A lyric like that should sink a heart, but there’s focus and acceptance in the vocal delivery - reiterated by the defiant statement “fuck your Armageddon”.

There’s more piston-like percussion on "Loss Deluxe" before the fuzzy, subdued "NC-17" brings a welcome change in pace. "The Message’ seeps in afterwards, and the band’s aversion to ignoring reality hits even harder here. The warped, Orwellian "Rat Wars" provides just as poignant a punch. It’s followed by the strung-out "Strange Days (1999)", before instrumental "Wrong Bag" breaks through. The track is a blend of explosive synth patterns, industrial clicks, acutely timed pauses, and ambient breaks - a two and a half minute example of the trio’s ability to alter moods with the flick of a switch.

The penultimate "Slaves Of Fear" is another stellar example of said skills. The trio lament the lack of individuality and freedom through more abrasive noise combinations and apathetic lyrics. The gentle nature of closer "Decimation" might temporarily disarm some listeners, but the pay-off requires patience. At the two minute mark, it starts to build towards the all-encompassing sound that all of HEALTH’s tracks inevitably bring. It’s an intriguing kind of aural violence that provokes an awakening, whether you like it or not.

With the help of longtime producer Lars Stalfors (Lil Peep, St. Vincent, Bob Moses), HEALTH have achieved a powerful sense of dissonance and doubt on VOL. 4 :: SLAVES OF FEAR. It’s a heavy record for heavy times, but another intriguing example of what the trio can achieve, even when they’re burdened with the weight of the world on their shoulders.