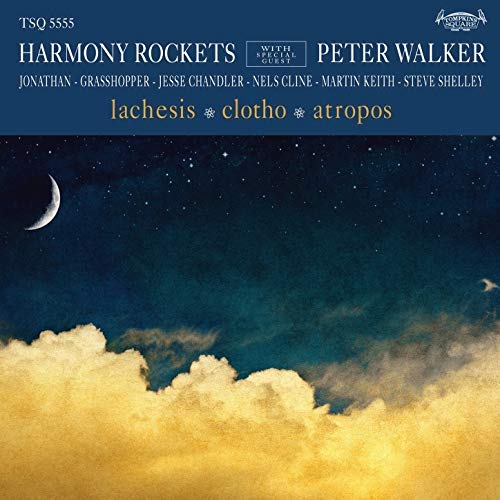 Is there a town that holds a more enduring grip over popular culture’s myth-making than Woodstock?

Apart from a certain 1969 festival and being the hometown to such legends as Bob Dylan and Van Morrison in the late '60s, the musical artefact the town in the Catskill Mountains in New York state is most readily associated with must be The Band’s Music from Big Pink, recorded soon after the impromptu sessions with Bob Dylan known as The Basement Tapes. The album celebrates its 50th birthday this year. Released 30 years after that timeless masterpiece, Mercury Rev’s Deserter’s Songs could well rank as number two.

Lachesis/Clotho/Atropos marks Mercury Rev’s return to both Woodstock (where the band relocated after their original line-up imploded in the mid-'90s) and the Harmony Rockets alter ego they employed to indulge their taste for psychedelic ramblings once their headline material had become less prone to collapse into disorientating oddness. The record is an inter-generational merger of Woodstock scenes new and old. Deserter’s Songs drew a line between the past and the present by featuring contributions from The Band’s drummer Levon Helm and organist Garth Hudson. This super-session marks the return to active musical service by Peter Walker, a cult guitarist associated with both the most heady lysergic madness the '60s could cook up (Walker served as the musical director of Timothy Leary’s LSD initiation “celebrations”) and the rootsy ‘American Primitive’ acoustic folk-raga solo guitar tradition exemplified by John Fahey.

With Sonic Youth’s Steve Shelley and Wilco’s guitar wizard Nels Cline also joining Mercury Rev’s Jonathan Donohue, Sean “Grasshopper” Mackowiak and Jesse Chandler alongside bassist Martin Keith, this incarnation of Harmony Rockets is certainly not short of potential. Lachesis/Clotho/Atropos matches the promise of the all-star line-up. More recent Mercury Rev albums have at times tended to get bogged down in excessively ornate orchestrations. Contrastingly, the three lengthy instrumental tracks contained here pulsate with the organic joy of an adventurously assembled band extemporising in a room, never quite sure what might happen next, enriched by atmospheric production touches.

The project’s potential is best fulfilled by the languid, pastoral closer “Atropos”. A blissful, majestic glide amongst the stars built around Walker’s spidery, explorative acoustic guitar and what sounds like distant, distorted emissions from harmonica, it’s a seriously beautiful slice of gently throbbing, contemplative psych-folk brilliance that is more than slightly reminiscent of wide-eyed and weary wonder of Deserter’s Songs. It (and the record as a whole) is a testament to the enduring potential of the old, mythical Woodstock tradition of a band setting up in a room (or a basement) and waiting for inspiration to strike.