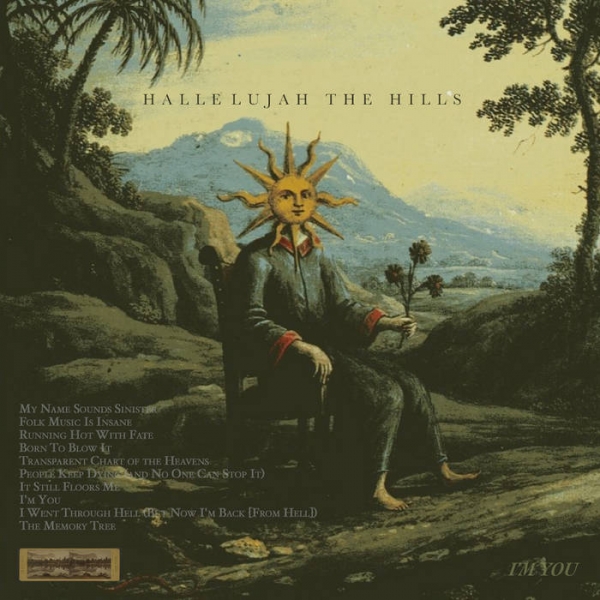 Hallelujah The Hills have been somewhat lost in the shuffle, but have retained a Zelig-like presence amongst some of indie rock’s biggest hitters.

The band helped midwife the recording of Titus Andronicus's The Monitor (for my money, the decade's best album), played shows with The Hold Steady, and counted the late, great David Berman as a fan, friend and mentor. But in their own right, their seventh album doesn't just cap a quietly consistent decade for Hallelujah The Hills, which saw them release four increasingly refined LPs as well as frontman Ryan H Walsh's first book, an account of Boston's underground scene in the late sixties. It ties up everything they've been working towards into one glorious hour-long burst.

And maybe it's the time of year. Maybe it's the time of decade. Maybe it's the utter fuckedness of nearly everything that's happening. Whatever the reason, I'm starting to really appreciate a level of certainty and comfort in the records I listen to, and I don't think there's going to be a more viscerally comforting album than I'm You to come out in 2019. It's a treatise on genre, an exploration of American rock’s past, present and future, and ultimately, a fucking good argument for why music and kindness matter in a world where the argument somehow still needs making.

"Hello," rasps Walsh on the album's opening line, "I am the person singing this song." "My Name Sounds Sinister" is a tense, writhing thing – imagine if The National’s music was as uncertain as Matt Berninger’s lyrics. The song second guesses itself and its imagined listener at every turn, offering increasingly profound pearls of wisdom as it hits slow crescendo after slow crescendo. But at its core, its narrator just doesn’t understand why “Every time you say my name, it sounds sinister.” Begging to be heard over peals of brass, the person singing this song just wants to connect.

I’m You is a record that’s all about how rock helps people forge connections and seek reassurance. Big whoop. There are plenty of those. But it might just be the first such record that knows full well it’s part of a dying breed. Not that this stops Walsh from turning out his usual brand of killer one-liners, glorious song titles – a toast to "I Went Through Hell (But Now I’m Back [From Hell])" – and epic, lacerating rock and roll. It’s just that the humour’s a little more tinged with sadness this time around. As one knowing line of the galloping "People Keep Dying (And No One Can Stop It)" – those titles again! – would have it, “In the corners of song nobody needs, I am exported to another dimension.”

Likewise, the seasick waltz of "Folk Music Is Insane" reckons with what good that antiquated artform can do when, these days, “a ghost with a guitar” is all too easily drowned out. Meanwhile, the euphoric "Running Hot With Fate" may turn its gaze outwards, offering alternatively tragic and hopeful one-line back stories of character after character. But the crux of the song belongs, as ever, to Walsh’s sage advice, as much to himself as to the listener: “If you think you’re at you’re limit just remember what some folks survive.”

It all comes to a head on the title track. Over three reverb-drenched chords, the band lays down a vast, sweeping soundtrack to Walsh’s calm, deliberate mission statement. Everybody has a place in the world that's worth acknowledging ("Roll the end credits, but don't forget to thank the dolly grip"), no one is immune to tragedy ("Even Bob Dylan lost his dream girl") and all kinds of music has the power to help you out if you let it. "Rock and roll improved my chemistry," he sings over washes of feedback. "Hip hop made me trust the universe." But again, it all boils down to human connection, a hand calmly extended through the speaker, by way of a scream: "The one thing they all taught me was I'm you. DON'T FREAK OUT! I'M YOU!" And the real success of this record is that the band - not just Walsh, but everyone in Hallelujah The Hills - makes you believe every damn note. You'd be forgiven for freaking out. It's a lot to take in.

Walsh’s first band, The Stairs, started in a small town in Massachusetts, using a ten grand grant to make a record which everyone in that town who wanted to could guest on if they wished. I’m You simultaneously acts as the thesis statement for that idea, and proof that it worked – it's some of the best rock records about rock music since Wilco's Being There, but loaded with the same turn-of-the-decade tension and power as Yankee Hotel Foxtrot. But none of that matters as long as you're singing along. And if you’re singing along, then congratulations, you passed the audition. Welcome to Hallelujah The Hills. Don't freak out.