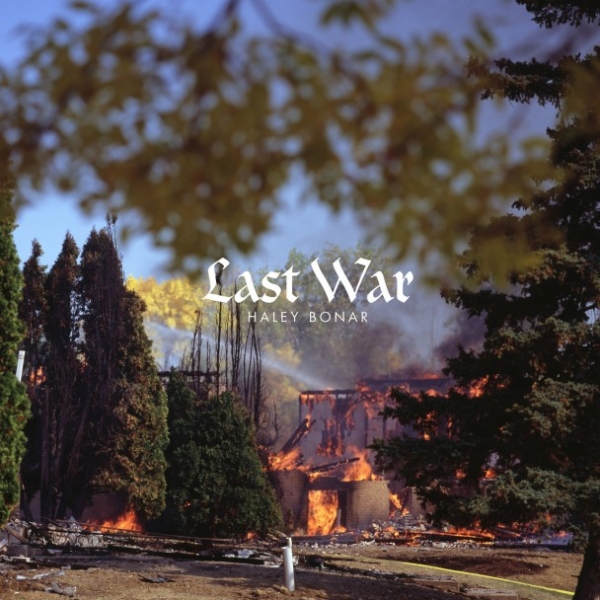 “I’ve lost a little bit, but I’m gonna go find it/yeah, I’m gonna go find it,” Haley Bonar yearns on “Bad Reputation”, one of the preceding cuts from her new record, Last War. It sets the scene for much of the album; what she’s lost is to us unknown – maybe she’s not even sure – but she’s adamant that she’ll find it. There’s a vocalised perseverance and a strength of will at the forefront. ​

On Last War, we see Bonar, now roughly 13 years into her career, veer away from her sparser side. The shattered fragments of alt. country and heartache, once delivered via predominantly acoustic means, are mutated and warped. Bonar proudly brandished space in earlier records, using the silence as an extra instrument, and weaving narratives in a more traditional folk fashion; there was a lot of eggshell-thin finger plucks, sheets of brittle wurlitzer and skeletal, naked melody. Never frail, but perhaps rawer.

Last War is an ardent direction change. There's less sonic reticence. Along with her characteristically nerve-prodding lyrics, the music has been unshackled, with guitars screeching into the distance, booming rock percussion and grunge-speckled pedalboardery. It's louder; it's toothier. Whether it's more emotional because of this change is probably a more subjective thing, but one thing's for certain: Bonar's heart, still bloody and beating, is firmly stapled to her sleeve.

The aforementioned “Bad Reputation” buzzes and shuffles, avec fluttering riffs and big country pop hooks. It's not entirely dissimilar from the output of Caitlin Rose, or the less dour offerings of Torres. The record's title track dawns with a chunky post-punk bass riff, almost unrecognisable from Bonar's back catalogue, with Bloc Party-type strumming, the barebones clack of rimshot, and looming shadows of Savages. There are jarring swarms of earthy reverb and harmonic twinkles of “From A Cage”, surfy licks on “No Sensitive Man” and the faintest wisp of Joy Division on “Kill The Fun”.

She does keep true to her roots on some efforts, like “Eat For Free”, but on the whole, this is an overtly electric alt. country collection. Bonar dips into other genres for a quick peek, never lingering long lest her identity and musical style get corrupted, but there are twangs of more vicious aural flavours.

Despite how much Last War differs from previous efforts, it's still a distinctly Haley Bonar record. The emotionally wrought soul is still eager for resolution, wryly commenting on life and societies' foibles, but it would appear that she's less wary of the consequences. Where once she may have looked inwards and remained intimate, she now takes those feelings and rams them into the offending party's mean ol' fizzog. It's Bonar, with very obvious cojones.