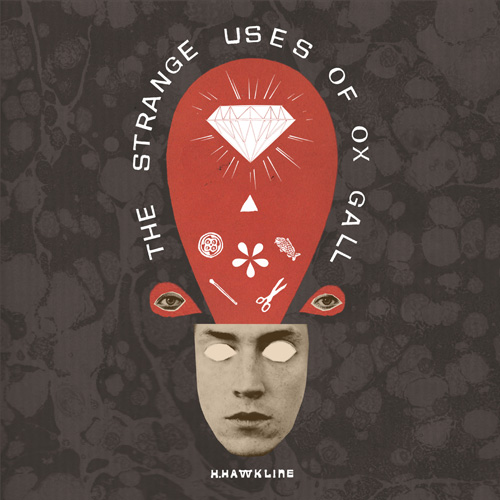 Two things. Firstly, if you like your music to sound like a broken record, great, you’re going to love H. Hawkline’s The Strange Uses of Ox Gall and you should go and buy it at the earliest opportunity. Secondly, I don’t like my music without pretension.

Christmas 2010 was full of snow. Every morning felt like waking up in the Gulag. Still, the room at Clwb Ifor Bach, Cardiff was jam packed to witness H. Hawkline play the Shape Records Christmas party.

After a year of rising to indie fame, Huw Evans (the real life name of H. Hawkline) performed a brilliant set of songs from his first album A Cup of Salt. Joined by Stephen Black (Sweet Baboo, Wickes) he reeled off a flawless half an hour of easy, accessible music. He looks good to release a blinding album in 2011.

November 2011 is significantly different. Beginning with ‘Cofio’ and the token sample of childhood noises that grace so many new releases these days, The Strange Uses of Ox Gall is a giddy ride through a watered down psychedelic welsh vision. Influences are obvious. There aren’t many bands from Wales that haven’t been influenced by Gorky’s Zygotic Mynci at one point or another, but ‘Ballast’ sounds remarkably like ‘Diamond Dew’ from Gorky’s finest album Barafundle. That said, the track’s lovely and you can easily lose yourself in this fuzzed out toy organ ditty.

We’re brought back to the harsh sounds of Hawkline’s current output by ‘Big Red’ – a minute long loop about auto amputation. But then as if he’s playing with us, he heads back to the H. Hawkline we all know and love with ‘Surf Pound’. So relaxed the track is in danger of sending itself to sleep, Evans’ beautiful thick Welsh accent is the only thing that’s keeping it awake.

But for track eight, ‘My Dreams’, Evans goes back to his influences by writing a track which is really quite similar to Richard James’ ‘Wanna See You Die’ but without as much anger or pace. Two minutes in, however, the track begins to skip. Unclear whether or not this was intended, the person who first played me the Spotify version back in the summertime had to check whether it was intended or not. I don’t want to have to check on whether the music is broken or not – that’s not what a musician should aim for. It’s not big, clever or even mildly entertaining. ‘Two Ghosts At Sea’ however is a nice folky track with banjo and found sounds forming the percussion until the final quarter when it all kicks off a bit. That’s more like it!

You really shouldn’t judge H. Hawkline on the basis of this album. Sure, it will be some people’s ideal record: edgy, unpredictable and more exciting than the first. Others will be completely turned off by it and that would be a shame. Go see H. Hawkline live and you’ll see an entirely different man making an entirely different sound – and ultimately, it’s so much more worthwhile than this album.