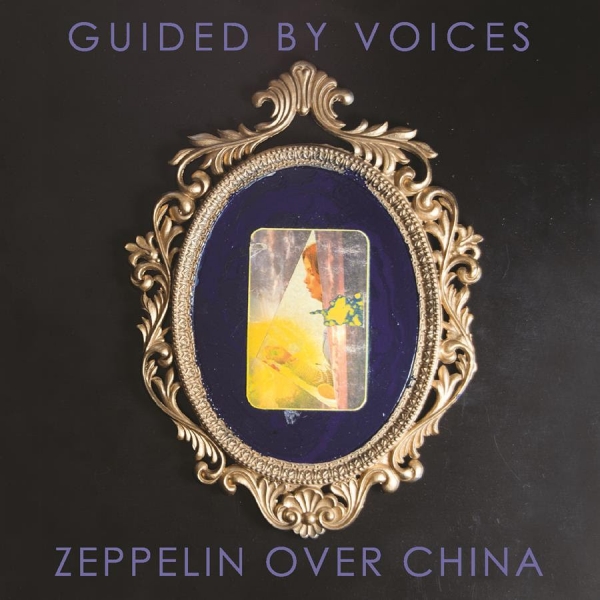 A peerless set of twenty songs and fragments, that LP was recorded in a basement across sporadic beer-fuelled sessions with a 4-track tape recorder and became the album which highkicked Guided By Voices into the public consciousness. That record, and the next year's follow-up Alien Lanes, remain two high water marks in the band's career. Still, we are now as far away from the release of Bee Thousand as it was from the release of Abbey Road. By now, people should stop talking about those two records as if Guided By Voices never released another note since.

Zeppelin Over China may not do much to change that conversation, but it should. Zoom out a little, and it sees the band four albums deep into the most unexpected late-career hot-streak in rock history. The current line-up has settled into a well-oiled machine, becoming arguably the most unified band in the entire 33-year history of Guided By Voices. This includes producer Travis Harrison, whose drops of ear candy are so important to the band's sound is such that his name is rightly listed in the credits amongst the rest of the members. Kevin March also cements his place as the best and most versatile of Guided By Voices' five drummers, driving the stoned-caveman pounding of the aptly-named "Holy Rhythm" with tight abandon and elsewhere straddling the kit like a dexterous octopus on the brooding "Nice About You".

Sounding as looming and gargantuan as its title, Zeppelin Over China gladly takes the opportunity to delve deep into frontman and rock scholar Robert Pollard's long-held "four Ps" theory - the notion that the key pillars of rock and roll are pop, punk, prog and psychedelia. The opening stretch alone offers babbling, sinewy post-punk, dreamy jangle pop and an ominous dirge in quick succession, while other stretches yield delicate filigrees of chamber pop, lysergic behemoths and heavy slabs of concrete rock. It's everything you've ever loved about Guided By Voices, all smashed together in one record.

Still, just when you think you've got a handle on Zeppelin's genre-hopping complexities, Robert Pollard will throw another no-hitter, and unleash a beer-spilling anthem to match recent classics like "See My Field" and "The Birthday Democrats". "Jam Warsong" slides on a lumbering Bolan boogie, thanks in no small part to Mark Shue's nimble basswork, and the instantly hummable "Cold Cold Hands" digs into your brain via Doug Gillard’s razor-sharp guitar work. But best of the bunch is "The Rally Boys", maybe one of the greatest achievements in the band's career. Bolstered by a celestial string arrangement courtesy of Gillard, the track does away with its verses in 30 seconds, allowing you to spend the remaining minute mainlining its soaring chorus ("Good fortune and luck! You can't catch the rally boys!"), which surges to its conclusion on a endless tide of hope.

Elsewhere, there are lyrical nods to the band’s past and, on "My Future In Barcelona", a wry Pollard imagining his distant retirement. But true to form, with their 26th LP not even on the shelves, albums 27 and 28 are already slated for release before 2020. All of which goes to show that Guided By Voices Version Who-Even-Knows-Anymore is in a league of its own at this point, operating as unbeholden to its history as to the wider music industry at large, and it seems like there’s no stopping them any time soon. So screw nostalgia. Bee Thousand will always be there, but so will Guided By Voices, living in the everlasting present. We should be too.