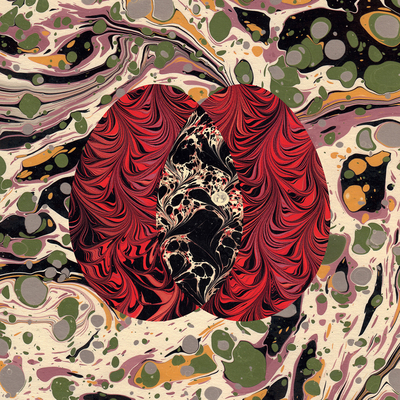 The most immediately striking quality of the music made by Alexander Tucker and Daniel O’Sullivan, aka North London psyche-pop outfit Grumbling Fur, is its sheer density. Since releasing their 2011 debut, Furrier, the pair have steadily released albums that may seem likely to buckle under the weight of the breathtaking volume of ideas with which they are packed were it not for the effortless craftsmanship of their construction. Their new LP, satisfyingly entitled Furfour, is no exception.

The opening trio of “Strange The Friends”, “Acid Ali Khan” and “Heavy Days” instantly locates this album in classic GF territory. Subtly harmonised, unconventionally catchy melodies abound, oscillating gently as ornate timbres shift, dune-like, deep beneath. Yet, for all the relative familiarity of these tracks, they are saved from feeling staid or obvious by their sinuous structures, eclectic subject matter and frequent interruptions from arresting sci-fi dialogue samples. And by the time the listener has become used to their idiosyncrasies, these relatively accessible opening tracks give way to “Molten Familiar”, three weightless minutes of careening synth leads, exotic guitar arpeggiation and fiery, relentless percussion loops. The track culminates in a disorientating melt of reversed chords and stumbling rhythm, then takes its leave as suddenly and slyly as it made its entrance.

Much of the rest of Furfour follows a vaguely similar pattern: clusters of relatively hooky, familiar psyche-pop interspersed with heady meanders into wilder territory. Yet to ascribe any real order to this charming, curious LP would be reductive; Grumbling Fur’s talent for stuffing their music with layer upon layer of invention makes not only for difficult generic categorisation, but also calls into question the listener’s perception of every track upon each repeated listen. The qualities which present themselves upon the first few listens to a GF track are often near-entirely obscured after multiple revisits, as the audience’s attention is diverted by any of the countless other constituents of these sensual, tactile instrumentals and explorative lyrical musings.

If this album has any real flaws – and they are negligible – they are directly related to its considerable charms. Tucker and O’Sullivan’s vocals exude a certain naïve earnestness that, for the most part, goes some way to saving their artistic restlessness from sounding forced or unnatural. For the majority of the record, they sound genuinely enthralled by the joy of experimentation, pushing their music into unusual directions not out of some conceited desire to sound “different”, but to quench a natural thirst for artistic development. However, just occasionally – such as on “Milky Light” – their voices sound a little exposed, vulnerable, oddly out of their depth. This might be attributed to production choices – the vocals are considerably less processed and manipulated than most other elements of each arrangement, creating an interesting but sometimes somewhat jarring contrast – but one does slightly suspect that, now and then, a little more conviction and direction in the vocal performances would go a long way.

This, however, is a minor quibble. The vast bulk – and on an album as thick with ideas as this, vast is the operative word – of Furfour is a masterclass in modern psychedelia, experimental enough to satiate the genre’s connoisseurs yet fluid and welcoming enough to be accessed by audiences from across the popular music spectrum. Perhaps the greatest compliment I can pay the album at this point is that it makes me feel a little disingenuous to attempt to summarise it into a succinct review having had only a few weeks to live with it. I suspect that there is much I have yet to discover about Furfour. Come back to me in a year.