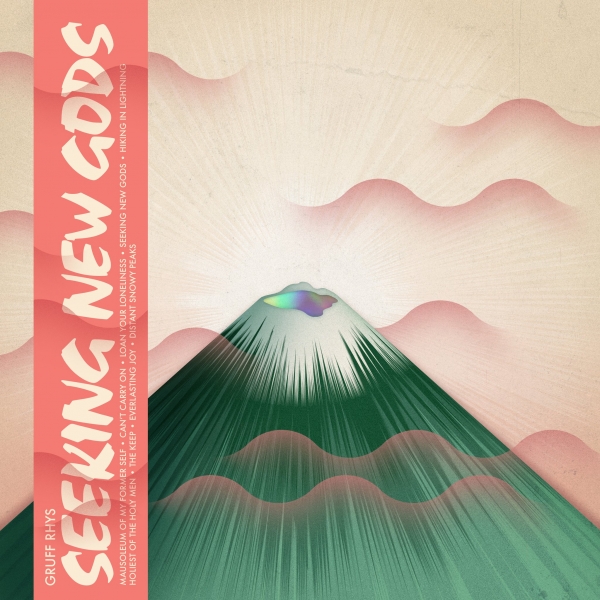 Though he’ll forever be known as the frontman of the great Super Furry Animals, Gruff Rhys has actually been making solo albums for a longer stretch than he ever did with his band. It’s been 16 years since his first record (eclipsing the 13 years between the first and last SFA albums), and along the way he’s picked up a whole raft of critical plaudits for his uniquely idiosyncratic ‘quirky’ pop.

Rhys’ best solo album, 2011’s incredible Hotel Shampoo, began a run of loose-themed concept albums, culminating in his most bizarre to date: Seeking New Gods is inspired by Mount Paektu – the mountain on the Emblem of North Korea, which holds immense mythological value to Korea and China. So far, so Gruff.

Though this is a solo album, Rhys is accompanied here by long-time collaborator Kliph Scurlock (once and most famously of The Flaming Lips). Scurlock’s muscular, powerful drums have been a key feature of Gruff Rhys albums since 2014’s classic American Interior, and here, on Seeking New Gods, he is vital and integral to the success of the album.

The opener, “Mausoleum of My Former Self” is carried along on a sprightly drum line that almost swings but stops just short, Scurlock showing the virtues of moderation. Rhys's downbeat, moody vocals in the verses contrast with his signature honey highs in the choruses, and the instrumentation – a maximalist melange of Latin brass and Eno-esque krautrock synths – just provides the ground for his voice to play on.

The otherworldly classic AM pop of “Can’t Carry On” sounds like The Eagles if they’d grown up on Star Trek and research chemicals, but it only serves as a starter for the real main course – "Loan Your Loneliness". With its thunderous T. Rex drums and Berlin Bowie synths, it's immediately evocative of Super Furry Animals in their pomp. It’s thrilling, and a testament to Rhys's longevity as a songwriter.

The title track, which splits the difference between “I Want You (She’s So Heavy)” thud and Flaming Lips float, is classically psychedelic and (more importantly) immensely relaxing. “Hiking in Lightning” goes for the opposite approach by going for some Detroit pre-punk grit and actually pulling it off.

“Holiest of HolyMen” and penultimate track “The Keep” both bounce along on springy rhythms, keeping the album bounding forward at a wonderful clip, while the emotionally kaleidoscopic closer “Distant Snowy Peaks” is a prime slice of retro-futuristic quasi-Oriental electronica.

Though he’s spent the best part of 30 years flying his freak flag high, Rhys has reached the kind of consistency that artists spend whole lifetimes striving for. In his whole career, he’s released maybe one or two albums that you might think weren’t great if you were having a rough day. Seeking New Gods is a fantastic album – and certainly one of Rhys’s best. No matter how odd the concept, or how strange the inspiration, each album that Gruff Rhys releases seems to prove that he couldn’t make a bad one if he tried.