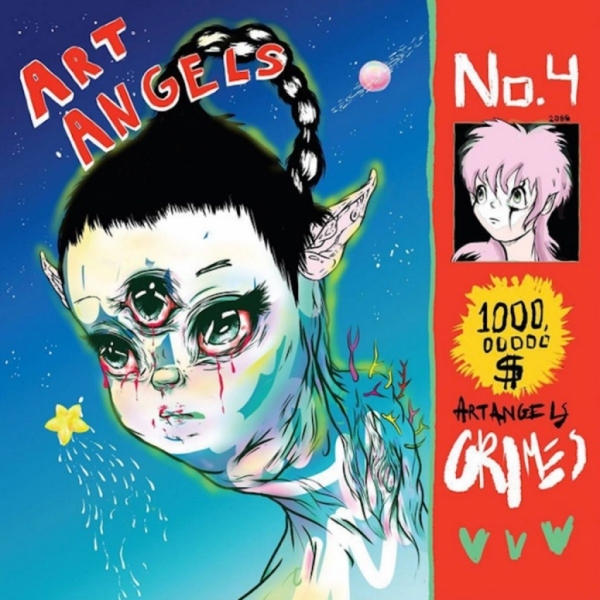 Clare Boucher’s first two studio albums as Grimes saw her lay down the foundations for her music and the third, Visions, was the finished product: avant-garde pop favouring an interplay of menacing, low-end dance beats and warped vocals. It was the type of music that flirted with the mainstream but always kept it at a distance.

With her love of pop and a progression from murky atmospherics to danceable, "post-internet" electronic music, it comes as little surprise that new record Art Angels is her most accessible to date. Boucher says this is "the first record I've made with an audience"; an audience that is not only thriving in Asia (whom she dedicated this year's "REALiTI" demo to) but across the globe.

What is a shock, however, is the near complete departure from her musical idiosyncrasies. Gone are the gorgeous, spidery electronic textures. Gone is reverb-drenched singing used as a vehicle for sound-over-message. Gone is the darkness and the potency of her futurist magic. Grimes, truly in the public conscious since Visions (2012), now channels  K-pop teeny bopping fun, club-bangers, and early '00s nostalgia. Change is something to respect and often celebrate. But is it always a good thing?

Such change may have been partly influenced by Grimes' dedicated teenage fanbase, addicted to her tumblr posts that range from musings on fantasy world characters to feminist polemics. The change may have come from Boucher's relocation to LA from Montreal. Even the writing process on Art Angels has been different. Rather than being written during three weeks of solitary confinement for Visions, Art Angels was put together over a twelve month period after Boucher scrapped an entire album's worth of "un-pop", "weird crap" songs.

With all this in mind it's interesting how she gives little clues as to what lies ahead on Art Angels in opener "laughing and not being normal". A jumble of orchestral sounds and semi-audible lyricism, the song spouts an oddly stirring neutrality.

But what comes next is about as uncharacteristically Grimes as you could imagine. "California" sits on a RiRi "Pon De Replay" dancehall beat, replete with jangling guitars and bubblegum pop vocals. It's one of the first times Boucher's lyrics have been decipherable bar her one-off 2014 single "Go", an EDM-inspired song she wrote for Rihanna herself that was subsequently rejected (and rumoured to have been featured on the canned album).

"California / you only like me when you think I'm looking sad,” she sings in an apparent open-letter to her new home that bullies as much as welcomes her. The Vancouver native may succinctly illustrate LA's sometimes merciless nature with a playoff between the song's joyful, squeaky-clean sheen and downbeat lyrics, but as something purely to listen to it's not enjoyable.

Sadly this type of writing continues through much of Art Angels. Grimes' introduction of the guitar into her music (an instrument she learned for the album as well as the violin and others) here serves as the base of her new pop creations.

On the dull "Belly of the Beat" it jangles rambunctiously alongside a track lacking in infectious hooks, while on "Pin" it starts with a nostalgic '00s flanger-like effect before breaking out into agonizing, teeny bop power-pop chords. None of it is used to any particularly interesting effect unlike her vastly creative synth work of yore. Those conniving, arcade game synths on Visions' "Oblivion" and the crystalline bleeps that peppered Geidi Primes (2010) are long gone.

Art Angels' lead single "Flesh Without Blood" is a slight improvement. The crunchy guitars here may drive the beat well and are mixed to perfection, but on the whole it's as nearly as forgettable as the aforementioned. Those happy to rock-out to middle-of-the-road early noughties pop (or even undulating Europop à la Vengaboys on "World Princess part II") will probably like it.

The problem here isn't that Grimes has gone pop. The problem is that this is an ambitious artist spewing out music that is just, well, acceptable. For the level of pop she appears to be aiming for, the hooks simply aren't there.

There are a few tracks that restore faith in her as one of the most creative, boundary-pushing artists of the last few years. The Janelle Monáe-featuring ”Venus Fly" sees Boucher return to the gutsy, low-end beats of Grimes’ previous work - albeit the rhythms here being more primal and gripping than her past synthetic judders. The contrast between Boucher's victimised "Why you lookin' at me?" and Monáe's confrontational "Why you lookin' at me?" laid bare against ferocious beats and emotive violin is powerful and fun. "What if I pulled my teeth / cut my hair underneath my chin?" Monáe proffers with an acidic tongue, a lyric that asserts resistance to some kind of social norm. We don't know if Monáe's position here is an extension of one of Grimes many alter-egos on the record but one can't but think this is Boucher stating: this is me - take it or leave it.

That motif is no better articulated than on the rather barmy but quite brilliant "Kill V. Maim". This is the biggest leap into Boucher's fascinating imagination, here posed as Al Pacino’s The Godfather: Part II character (though in this case a vampire-mobster). "B.E.H.A.V.E aggressive" Grimes states in an intimidating, faux K-pop giggle over bombastic beats and a heavy-handed four-chord guitar progression. With its unabashed nature there's something of a "Circumambient" (Visions) feel to this track though executed with greater intensity.

More battle-ready beats are found on "SCREAM", featuring Taiwanese rapper Aristophanes. A gritty guitar riff and a modified metal scream sample, performed by Grimes, makes for a ferocious two-minute cacophony that is easy to see slotted into movie soundtracks.

But while these feral tracks are accomplished in their own right, they do sit at odds with Art Angels' monotonous filler tracks as well as its few radiant, tamer songs. Where Boucher loses the gorgeous, hazy subtleties of the demo version of sugary R&B track "Realiti" she more than makes up for it with "Life in the Vivid Dream". Set on a beautiful bed of cascading, dark pop acoustics and an otherworldy falsetto, this is the Grimes that fans will be most able to recognise, and in some cases, enjoy the most.

As the penultimate track on Art Angles, "Life in the Vivid Dream" acts as a litmus test for a record that is undoubtedly going to divide fans. Those engaged by her new pop direction will see it as a welcome addition. Those in favour of her earlier work will desperately cling onto it.

Grimes has always been a captivating musical figure because she's never been afraid to experiment. This is captivation is regardless of her obsessions with fantasy world culture, her outspoken tumblr posts, or even her inventive fashion sense.

Somehow she's always managed to tread a rare, thin line between catchy left-field creations and catchy mainstream pop. On Art Angels, we hear that high art experimentation fall into mainstream territory with only fleeting moments of brilliance. It's not bad for an artist to develop or try something different - that's experimentation in itself. But the question remains: how good is the pop she always wanted to release?