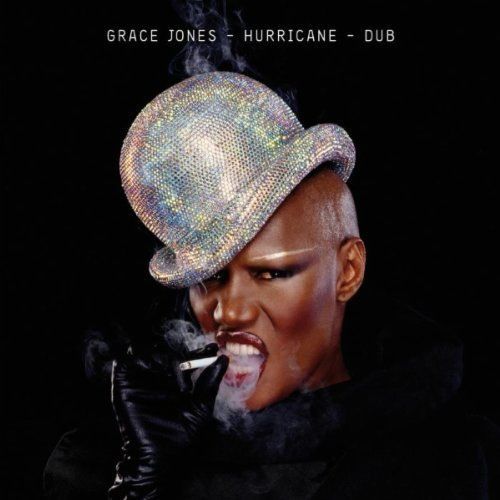 “I can give birth to sheep”/ “I can be cool”: evidently 19 years spent on a self-imposed hiatus did little to diminish Grace Jones’ impenetrable tower of confidence. In her first body of work since Bulletproof Heart (released back in 1989) and eager to prove she was as intriguing as ever, her 10th studio album Hurricane was unleashed. It’s almost like Jones gazed into her zeitgest crystal ball and foresaw Rihanna’s androgynous R-rated phase and the arrival of the global pop/fashionista phemenomem we now know as Lady Gaga. Thus somewhat rightfully felt the need to remind us all that she’d been manipulating her now venerated image in similar ways just 20-30 years earlier.

Now happy she’s once again cemented her place as Queen of Crazy. She’s redistributing Hurricane as Hurricane Dub. The name says it all really. 2 CDs, totalling 19 tracks, one CD being the normal 2008 version of Hurricane, the other being Hurricane reworked and pushed through a dub cylinder, with Ivor Guest taking up production duties. The major difference between the original and dubs is that the out-of-character vulnerability that was present on some of tracks like Willams Blood is no longer present. This is mainly down to the disregard for vocals and lyrics. Most of Jones’ powerhouse singing is smeared in druggy effects, then used as more of an aid to maintain the tropical, blissed-out feel of the remixes, then a way of communicating a story to the listener. However, that’s not to say that this repackage is void of any emotion. ‘This Is Dub”s reggae tendencies are coaxed out further; the slick, whiplash, dancehall two-step beat becoming more and more intoxicating with each listen. And while ‘Corporate Cannibal Dub’ may have traded in it’s industrial furnishings, one would be foolish to think she’d also traded in her man-eating ways. All in all, Hurricane Dub is a respectful edition to Jones’ surely everlasting legacy as a artist who does what she wants, and still manages to keep interested while doing so. Whoever said legends have a sell-by-date was wrong.