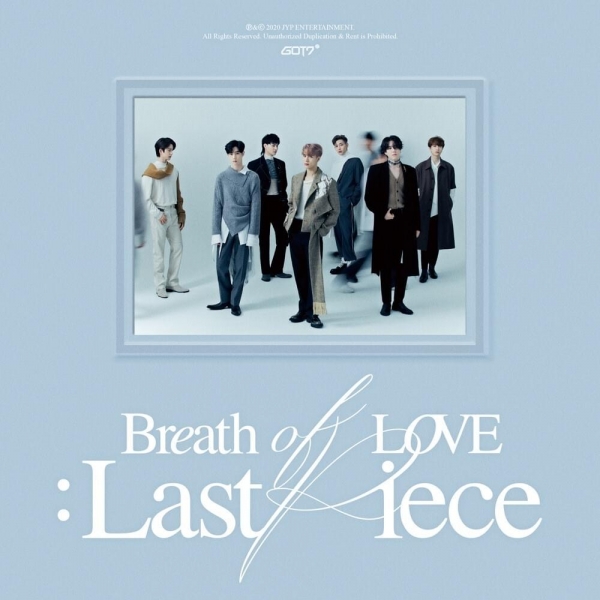 There’s an ever-present confidence to GOT7 on their new album. It’s not a generic one either, but one which comes with an earned self-assuredness, or accompanies a knowledge that whatever it is the group does, there’s a high chance it’ll pay off. After all, their last EP, the certified platinum DYE, was their best-selling effort to date - an impressive feat for the experienced K-Pop group - and no matter the challenges, success has followed the septet closely since their 2014 conception.

Nevertheless, it’s exciting to see this aplomb manifest in the way it does during the project’s fast-moving 32-minute runtime. On the pre-released single “Breath,” it’s more understated, moving through the track’s chanted, whistle-aided hook and mid-tempo synth backdrop nimbly. No surprise then, that the album’s appetiser amassed over 20 million views within the first three days of its issuing.

On title-track “LAST PIECE,” though, the bravado is immovably heightened. Opening with sleek, interchanging vocal melodies delivered over airy synths, the song coasts through its verses before inflicting a blistering chorus, one with vivacious swagger and whirring, crunching electric guitar sounds, as its centrepiece. “You’re the missing last piece,” Youngjae sings, entirely enrapturing in his steadfast conviction. Pop music is at its best when it operates as a maximalist form of escapism, and “LAST PIECE” has the decadent, soaring production apt for the genre’s apex.

Throughout the record there’s a dedication to diversity, the seven-member outfit seemingly discontent with the notion of resting on the laurels and sticking to a single formula. It undoubtedly adds to the excitement, with the listener never quite knowing what to expect, but does mean that one has to be open to a hearty dosage of curveballs. But, when that means that the echoey, trap-tinged smoothness of “Waiting For You” can find a space next to a cut such as the wispy, tender, vocally lavish “Thank You, Sorry”, all whilst a super-charged anthem such as “Born Ready,” which moves through its elastic future bass production at a breakneck pace finds its rightful place too, it’s decidedly exciting.

It’s no coincidence that this convention breaking, creatively freeing project for the experienced K-Pop group coincides with the septet’s first venture into having an active hand across all corners of the record. And whilst a level of self-production isn’t rare for GOT7, such a consistency to the hands-on approach pays dividends when it comes to fluidity. Even with the sheer amount of diversified stylings, there’s a palpable neatness to how the album is sonically packaged so that nothing feels disarranged, nor disperses the seamlessly congruent flow.

In fact, when the constant gear changes and tweaked stylings works so well, it’s hard to argue with the output at all. So, whilst Breath of Love: Last Piece may not be a linear pop, permanently rousing release, it never pretends to be, and succeeds instead in its unabating dedication to consistent intrigue.