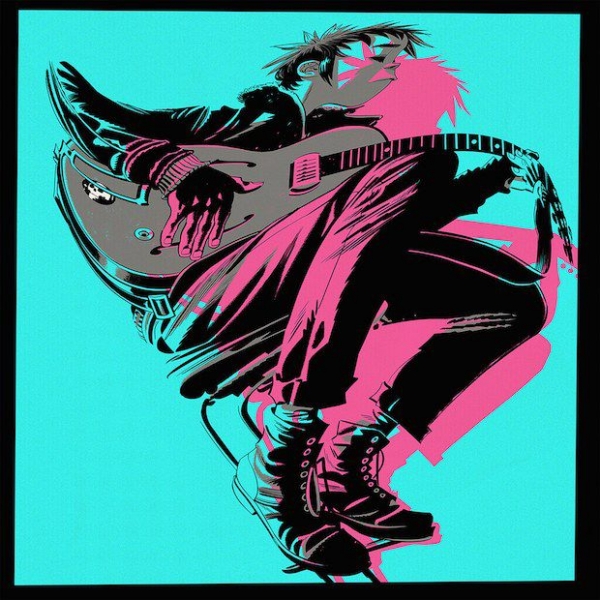 In today’s pop sphere, it’s easy to question whether or not Gorillaz are still relevant.

Back at its inception it was a chance for Damon Albarn to let off some steam. In the post-Britpop world, Blur were attempting to reinvent themselves. Whether it was a successful reinvention or not is down to how you react to 13, but it was clear that the band were coming to their end by 2001. So Gorillaz, our first true glimpse of this millennial Banana Splits, was more than just a cartoon prank. It was Albarn starting anew.

But as Gorillaz transformed from a fun a fun little project between Damon Albarn and Jamie Hewlett, it became less and less clear as to what the purpose of Gorillaz was. Was it simply a chance for Albarn to get a bunch of mates and idols together and see what might happen, or was it Albarn trying to (both successfully and unsuccessfully) tackle the world’s ills through the facade of four cartoon band members?

The Now Now, their sixth album, shows a Gorillaz that has moved from Albarn’s personal toy box to his personal diary. There’s some backstory about “bassist” Murdoc being framed and put in prison, leaving 2-D in charge of the band, but the fictional cartoon band gimmick reveals itself as a way to put Albarn front and centre. The line between 2-D and Albarn fully blurred.

Like on Plastic Beach, the post-modern cartoon mischief is glossed over to the point where you start to question why this is even a Gorillaz record in the first place. And yet, after the over-stuffed and messy Humanz, it turns out to be a good move.

With a mere three guest artists on The Now Now, this is the Damon Albarn show. Written while on tour, and fleshed out in the studio with the help of James Ford, The Now Now tracks Albarn’s loneliness on the road. Here he attempts to find his place in the different worlds he finds himself circling, almost like Gorillaz as a concept trying to find meaning today.

A melancholic air floats over the entire record, even in album opener “Humility”. Hidden behind the yacht-rock dreaminess is an Albarn baring his soul. “I don’t want this isolation/see the state I’m in now”, he laments over the sun-drenched guitars of jazz legend George Benson.

“Idaho”, with its beautifully crystalline synths, has an airiness to it that feels like a moment of pure contemplation. Here, Albarn looks “out on the bus/at silver linings getting lost”. It’s one of those beautifully serene moments, like Plastic Beach’s “Empire Ants”, that Gorillaz don’t do often but do so well. But now it's one loaded with so much personal weight.

The Now Now trips up when it reverts back to the Gorillaz of old. “Hollywood”, though featuring a fantastic dark techno undercurrent, feels like another attempt to tackle modern issues that the band previously always played too generally for fear they might offend. The efforts of biting back at post-9/11 America on Demon Dayz and Trump on Humanz ultimately fell flat because they didn’t bite hard enough. “Hollywood” falls into that same trap, rescued only by that techno beat and a somewhat fun Snoop Dogg appearance.

The last time Albarn felt restless, we got the “first iPad album”, The Fall. But where The Fall felt tied to Earth, The Now Now soars in a way that reminds you just how magical Gorillaz can be, even if the cartoon concept is starting to look less and less necessary.

The lack of genre hopping (sticking mostly to electronic and pop) and guest stars, and the move away from tackling the issues of the day in favour of something more personal, makes The Now Now their most straightforward record, but it's no less interesting for that. It's evocative of a drive down the coast, the summer breeze whipping through your hair, as you try to hash out everything that's troubling you. It's a record filled with moments of darkness and moments of pure bliss in equal measure.

It’s no Plastic Beach, but, by ditching the often hackneyed attempts to stay relevant that verged on self-parody and digging into their identity and other existential fears, Gorillaz have demonstrated that they still have the power to feel vital.