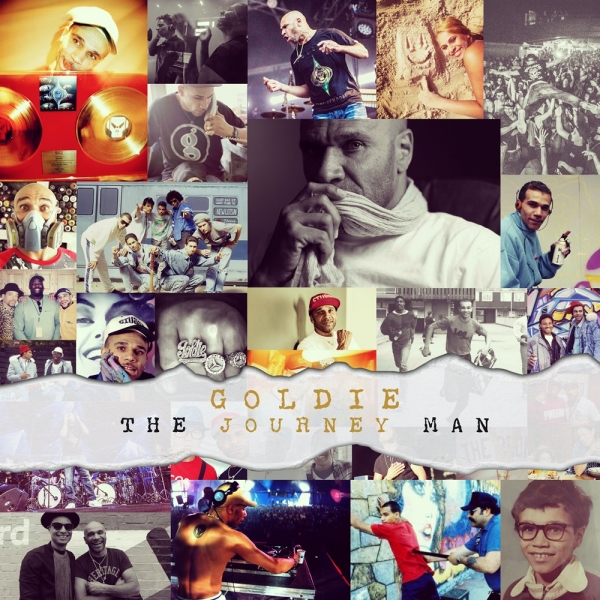 No matter how drastically the UK has irrevocably changed since Goldie last released an album, the pioneering DJ/producer’s jungle sounds will forever be intertwined with the musical history of modern Britain.

On The Journey Man, Goldie’s first proper solo studio LP since 1998’s Saturnz Return, the sonic alchemist from the West Midlands manages to craft a sprawling, nearly two-hour collection that sounds vital and inspired, while also delivering a fresh twist on the euphoric drum ‘n’ bass club anthems that he’ll always be known for.

While the modes and methods of consuming music have been modified in Goldie’s absence, there is no doubt that these pulsating new batch of tunes will sound right at home whether they are filling Spotify playlists or nightclub dancefloors. No matter what creative endeavor Goldie is pursuing (acting, composing, visual arts, or running his label Metalheadz), he has continuously kept his finger on the pulse of the contemporary artistic world, so this new record sounds innovative and entirely in the moment rather than an outdated attempt at trying to capture past glory or capitalize on new trends.

The Journey Man not only serves as a vibrant study of the multitude of styles and approaches to electronic music over the past two decades, but it ultimately stands as an authentic glimpse into the personal and professional adventures that Goldie has experienced throughout his rich, gratifying life. The jazz and funk-laden lead off track, ‘Horizons,’ (featuring guest vocalist Terri Walker) touches on the restorative power of resetting your life and starting over anew, all while never losing sight of your dreams and being thankful for what you have. The old school churn of ‘Mountains’ echoes the moody rhythms of Goldie’s trip-hop brethren (Portishead, Massive Attack, Tricky), while also providing a showcase for Naomi Pryor’s stunning, wistful vocals.

The record is a fluid blend of Goldie taking reflective looks back on where he’s come from and the myriad influences that have shaped him over the years, alongside a sonic perfectionist’s competitive desire to push the music world forward with his new work. ‘Castaway’ is a knowing nod to late-'80s b-boy culture, while ‘I Think Of You’ is an affectionate snapshot of the legendary Metalheadz Sunday Sessions club nights at London’s Blue Note, with crackling drum ‘n’ bass beats augmented by smoky vocals from Goldie’s wife, Mika Wassenaar Price.

The centerpiece of the album is the slow burning electronic elegance of ‘Redemption,’ a dynamic, nearly 20-minute multi-part suite that samples 'Hi-Tech Jazz' by legendary Detroit techno innovators Underground Resistance. The tune, and Goldie himself, is highly indebted to the urban music of Detroit, and this track is his way of celebrating that influential sound while rightfully tipping his hat to the original birthplace of techno. Goldie also pays tender homage to Pat Metheny’s 'Are You Going With Me?' which he feels is one of the greatest songs of all time. He reworks the celebrated track from the ground up using the Synclavier loop from the original recording, and titles it in French, ‘Tu Viens Avec Moi?’ to round out his modern electronic twist on the jazz fusion classic.

Throughout The Journey Man, you hear Goldie taking sonic chances and reinventing himself and his signature sound, all while pushing his music in thrilling new directions. But there are other sections of the record that blissfully capture those carefree moments in the ‘90s when the UK dancefloors were packed with likeminded souls entirely lost in the buoyant rhythms, towering beats, and boundless possibilities that electronic music conjured within us all. And while those radiant moments are likely forever lost to the ravages of time, Goldie’s new collection will immediately bring you back to those euphoric days, reminding you that the party doesn’t ever have to stop as long as the music keeps hitting you right.