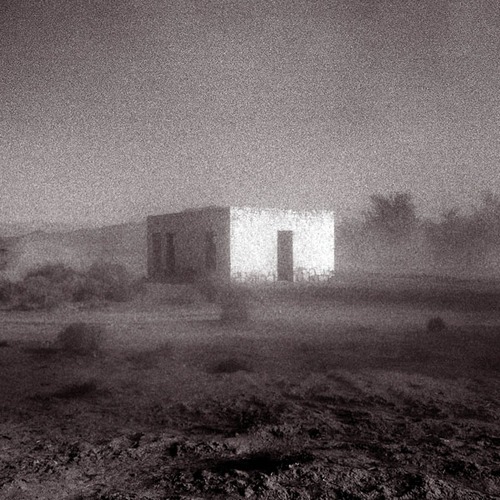 Midway through album opener ‘Mladic’, before I’d even noticed that the second track was called ‘Their Helicopters Sing’, it had occurred to me that Godspeed You! Black Emperor’s new album Allelujah! Don’t Bend! Ascend! has something of a military aesthetic to it. ‘Mladic’ revolves around a monstrous airborne thudding, the sort of oppressive rumble that invokes prone figures face-down, hands-on-ears amid a blade-churned dust storm.

Violin, drums and what feels like so many guitars unite, combining a gunship rumble with swirling, distorted eastern melodies and bowed screeching. As with GY!BE side project A Silver Mount Zion’s last album Kollaps Tradixionales and its force-fed, cannibalistic “metal birds”, Allelujah!… initially (well, for at least the first thirteen minutes of ‘Mladic’) comes on with the force and trauma of powerful and conflicting forces; catastrophic technology; of a world destroying itself. But then, the power seems to ebb away, as if equally matched prizefighters – heavy-limbed and sapped of the energy to throw another punch – are collapsing into each other and to the floor.

The first thing to follow is a mournful, soulful violin, that drifts across the debris for a few seconds – what might be an elegy, were it not for what comes next: within seconds everything else crashes back in – but louder, more powerful. This time the thunder follows the violin, the power directed – elevated – by the melody. It isn’t, those last few minutes seem to suggest, death that makes war futile, but rather the unstoppable will to survive regardless.

While many of his contemporaries were building grand, nationalistic epics, brutal in scale and militaristic in force, the Hungarian composer Béla Bartók departed for the hills in and around his native Hungary. For years, he travelled, recording the folk songs of those rural communities, incorporating something of their essence into his own compositions. Armed with the songs of the outcast, disparate tribes inhabiting the hills and forests of Europe’s poorest nations, instead of fighting in the War, Bartók rebelled against the fetishism that drove war itself.

And so it is here. As ‘Mladic’ collapses before rising with new purpose; as it fades out into recordings of voices, car horns and rowdy percussion; as folky strings play amid the drone of ‘Their Helicopters Sing’ (the title itself finding music amid menace). Of course, it doesn’t always work out that way, all subverted threats and happy endings; ‘We Drift Like Worried Fire’ incorporates the mixed emotions that its title hints at, as a doom-driven melody fights back and forth against more hopeful sections. But, as Godspeed discussed in their lengthy interview with The Guardian, “how could you find heaven without acknowledging the current blues, right?”

The last Godspeed You! Black Emperor album, 2002′s Yanqui UXO, was an underwhelming release, overly melancholic and as muted as the unexploded ordinance its title’s acronym refers to. In Godspeed parlance, it spent too much time acknowledging the blues, and failed to point to heaven. Ten years later, on Allelujah!… we get a Godspeed reinvigorated, imbued with their best spirit, the spirit of the rag-tag collective, not equipped (or willing) to meet on the terms of their oppressors, but determined to persist nonetheless. This is an entirely different proposition to their most inspired and inspiring work, 2000′s Lift Your Skinny Fists Like Antennas to Heaven, but then a lot has happened since the turn of the millennium. What remains, and what keeps Godspeed You! Black Emperor vital, is the optimism that drives it all.