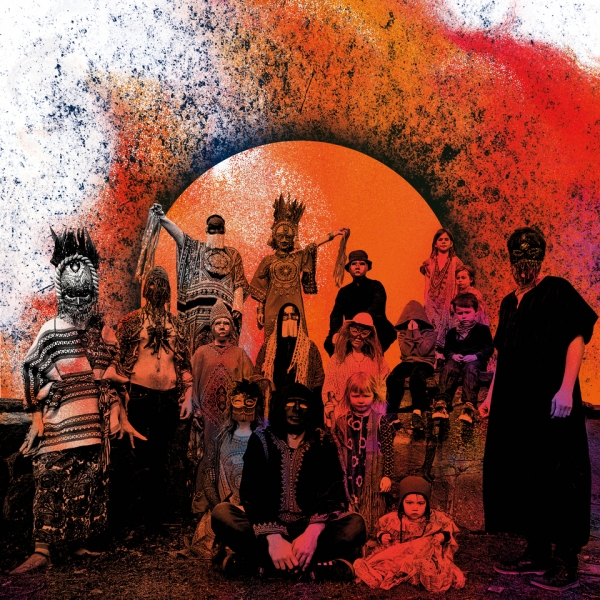 Goat make music as inscruitable and enchanting as themselves.

To listen to the music of monastic psych-voyagers Goat is to play the part of a detective. Theirs is a stateless, nomadic sound, barely a stampless space on a fully filled passport. Their knotted blend of East and West, African djembe with Funkadelic freakouts, immediately begs questions of origin.

The question, when asked, has been answered with layers of myth and misinformation: they claim to be from Korpilombolo in Northern Sweden, although they may spell the name incorrectly on their website. The pulsating, trancelike nature of their music comes under the influence of a voodoo tradition, which inspires too their masks an clothing; although this seems equally unlikely given Northern Sweden’s proximity to Haiti.

That such tall tales have only been half dismissed speaks volumes about their mind boggling sound: Fela Kuti, with Cream as his backing band, all four of them having gotten really, really, into witchcraft. But despite such mythologising, there is little chance of the band themselves overshadowing their work. Such tall tales serve as a smokescreen behind which the group retain their privacy. They do few interviews, fewer still in the runup to Requiem, so all the budding Goat detective has to go on, is a rambling press release which describes this as their ‘folk’ album.

On their third release the Goat sect largely give up their praise of the fire gods to worship the earth: images are of dancing in the African bush, ayahuasca in the Amazon. The opening track ‘Union of Sun and Moon’ is the first indication of the new pastoral charm with which they weave. From the opening strains of birds tweeting, and the chanted acapella vocal, off key and charmingly childlike (that feeling of peace later punctured with a primitive playground chant), you grasp for meaning, both within and without the music.

With the guitars slightly turned down, the mysticism and the spirituality has been turned up: "Psychedelic Lover" features byzantine style chanting, and the vocals regularly hit that sweet spot between keys, giving them a timeless, foreign quality. Pan pipes pepper the album, as do the almost tactile sounds of güiros, Koras, and a wider range of traditional, acoustic instrumentation. This only adds to the feeling of age many of these songs have: an air of wisdom and of inheritance which underlines Goat’s stated aim, and their folk credentials.

But Goat can still make a room writhe: their jam focussed methodology has always lent itself to trancelike, dancelike hip shaking, a solid groove laying the foundations before building layers and intensity. "Temple Rythms" sounds like an acoustic cover of Aphex Twin’s "Didgeridoo", "Trouble in the Streets" pure sunshine ecstasy, a Cape Town carnival that plucks only the finest grooves from Graceland. There remains plenty to dig your teeth into, and Goat retain their head-thrown-back, hard rocking form on tracks like "All Seeing Eye" (like Ram Jam playing a Masonic hall), "Goatfuzz" (The White Stripes if Meg was frontwoman) and Goatband (Led Zeplin rushing on MDMA).

An album called Requiem begs obvious questions about the future of the band. Such a misanthropic collective could call it quits at any time. The penultimate track, "Goodbye" is softly triumphant and the strains from "Diaribi", the first track from the first album, close "Ubuntu" the final track on Requiem. Ubuntu is a Southern African philosophical concept, roughly translating to ‘humanity towards others’ and emphasising the bond and one-ness of humanity. In this context, the album seems like a dying man pulling you close, and telling you to be nice to your brother with his final breath.

But to take this as a full-stop would be wrong. There is a feeling of higher power, an all encompassing truth or consciousness that pervades the album, and provides the thread to link their myriad sounds. Rather than an end, this feels like a reincarnation. They clearly do operate differently, communally, expanding and contracting and fluid, as band members drop in and out with their specific styles and instruments. Maybe it’s true that Goat are merely the latest in a long tradition of players from Korpilombolo, with its history of voodoo and unique musical style.

Often the creation of an elaborate backstory and diligent anonymity, like that of Jungle, or Deadmau5, is used to give credence to the music. In the case of Goat, the two form a cryptic, mystic, whole where it’s the music that gives credence to the myth. One comes from the other and vice-versa. The veracity of their story is irrelevant, so enchanting is the mixture of the two, in flowing robes and occultish masks. And there is certainly something heathen in the sacrificial brew, something of the Robert Johnson about it. Perhaps such music could only be made in a Faustian pact, in a Swedish voodoo commune, by a fluid group of masked musicians. However implausible that might be.