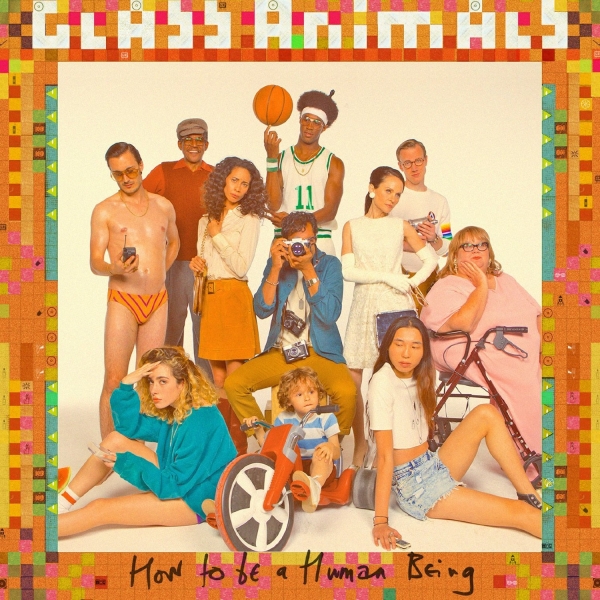 Glass Animals’ upswing from a mysterious glitched-out bunch of slug lovers to a rabble-rousing crew of pop Pied Pipers is an astonishing sight.

Those who bet on the Oxford outfit becoming The Next Big Indie Band are surely very smug indeed; they've always had excellent tunes, but Glass Animals previously lurked in the background, looking on rather than diving into the brawl.

But now they're on the cusp of being genuinely massive. They broke America like a brittle twig. Australia, Europe, the UK – huge territories quickly turned into hotspots of peanut butter vibes. Second LP How To Be A Human Being arrives at an exciting time in the lives of Glass Animals.

Debut record ZABA was a jungle. It was claustrophobic, insular, secretive, cryptic, and frequently jaw-dropping; it rarely gave much away, but the beauty was evident, and it remains a richly rewarding listen years after its release. How To Be A Human Being is demonstrably clearer – Glass Animals jump into the daylight, toying with form and themes and never looking back. It's still lush and varied, with all the quirks and signature twists that makes Glass Animals sound like Glass Animals, but it's boosted by a confidence in their own weirdness and a desire to explore the world around them.

The band have spoken about how their live show's evolution during 2015, from intimate sweaty pits to vibrant parties, has informed the record. Sharpening their claws while on tour has made for a bigger and bolder listen – feeding off a crowd's energy has singed some of the facade, allowing the group to venture out and let their curiosity run rampant. Bass is heavier, drums punchier, and the words are a lot clearer – you can belt along choruses rather than mumble mondegreens.

It hasn't just been the actual show that's shaped How To Be A Human Being either, with the antics on off days being crucial. Frontman Dave Bayley has spoken atlength about characters he's devised from the stories he's heard while trekking across the States. Drugs, sex, love, life, death – a rich tapestry of life experience has influenced the album's ideas and direction, lyrically if not musically. Bayley's talked about the sadness and the joy of strangers' tales; the good, the bad, the ugly is all found within this new album. Bayley still won't decipher the lyrics for you however, wanting fans to find their own meanings.

Despite retaining an air of mystery, the lyrics are far more accessible. Lead single “Life Itself” is easy to decode. It's a bombastic blitz of synth and guitars and sassy smirks, and it's shot through with swagger. “Leftover breakfast / cereal for lunch / she's broken but she's fun / my girl eats mayonnaise from the jar while she's getting blazed...” from “Season 2 Episode 3” is one of 2016's stranger lines, but it's crystal clear.

How To Be A Human Being is rife with ZABA-isms – immense detail, tiny sample fragments, gloopy textures – and “Mama's Gun” closer to the band's misty roots than their dazzling future, but the jagged hip-hop of “Cane Shuga”, the freakout riffs in “Take A Slice”, and “Pork Soda”'s spiraling mayhem all prove that Glass Animals have plenty in the chamber to keep us guessing.

The record's finest moment comes in its closing minutes. After a warped buildup of sordid tales and kooky manoeuvres, Glass Animals ready their final salvo: “Agnes”. It's undeniably huge; it's a rousing, lighters-in-the-air festival finale kind of track that tugs your heart in opposite directions – one second it's the saddest thing you've ever heard, the next it's true euphoria. It's so rich with emotion it makes you giddy and hysterical – all you can do is sing along.

Perhaps “Agnes” as an ending is a neat trick. Glass Animals save their grandest offering for the finale, leaving you with goosebumps peppering every inch of skin. The last memory of How To Be A Human Being is pure brilliance, and you're forced to revisit the record every chance you get. Each listen reveals more, scrapes back another layer. You'll get more and feel more each time you hit play.