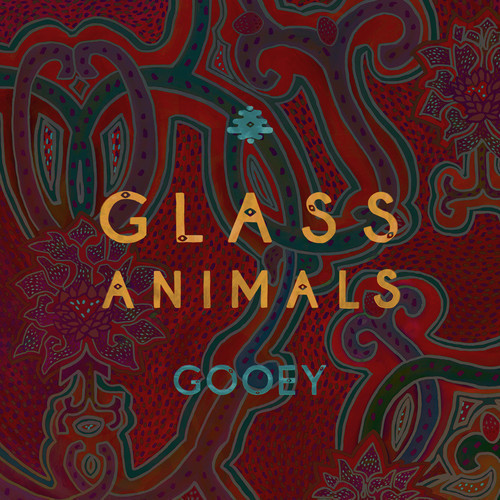 Let’s get this out of the way – fans expecting a new cluster of band originals on Glass Animal’s third EP, Gooey, won’t find it. Save for the title track and a collaboration with Brooklyn’s Tei Shi, this is an indulgent shrine to the fast-rising Oxford lot’s excellent single “Gooey” and, like the natural fluidity of their sound, demonstrates just how easily the song can be twisted, turned and tossed about. What the quartet have valiantly done so early in their career is thrown experiment at the wind and allowed a range of exciting artists to swoop down and claim, in parts, the music for themselves. It’s admirably confident, but in some ways only these swift Wolf Tone signees could pull the bravado off.

The EP, which precedes the very anticipated release of their full-length, ZABA, this spring, must begin where the stems nest: within “Gooey” itself. Arguably their most brooding cut to date, the track hears singer Dave Bayley’s lascivious falsetto snake around seeping basslines and fidgety blips, sprinkled with lyrics about pet names, escapism and sexual innuendos that would make D. H. Lawrence blush. “Ride my little pooh bear”, ” While my naked fool/Fresh out of an icky gooey womb/A woozy womb”, and “You just wanna know those peanut butter vibes” is just a snapshot of the song’s lyrical, abstract playfulness, complimenting the music’s supple grooves.

On “Holiest” the boys enlist New York experimental RnB goddess, Tei Shi, and it’s a perfect match. Bayley says: “we sent her a couple beats we had lying around that we thought she could really add something to. And she sent back a great vocal about both loving and hating something. I thought it would be fun to play the character that she’s addressing in my part so the different voices then help tell the story from two different perspectives.” True to his word, “Holiest” does just that, with intelligent interplay between Tei Shi’s yearning coo and Bayley’s reassuring vocal, sloshing about in multilayered electronic jowls.

The latter half of the record features reworks and remixes of “Gooey”, with Gilligan Moss’ being the clear highlight. It’s a typically barmy rework by the Chicagoan, initially convincing you it’s something off Caribou’s Swim with its broad palette of instruments, phantom echoes and tender house leanings, before Moss lets the tempo fall asleep, awake, and wooze into dark club afterglow.

Where Kingdom’s addictive, migraine-inducing remix laps up the original’s rhythmic weight, Chester Watson’s rework is mainly a rap slot-in with – albeit some intriguing lyrics and warm electric warps – just doesn’t add much to the package overall.

Admittedly, the playground melody of “Gooey” does begin to wane somewhat by the time it’s been pushed through all the producer mincers, even though none of them detract from the original’s strength. Gooey is certainly a top-heavy listen, but not one without its intermittent pleasure spots and interesting experiments. C’mon, ZABA, we want you.