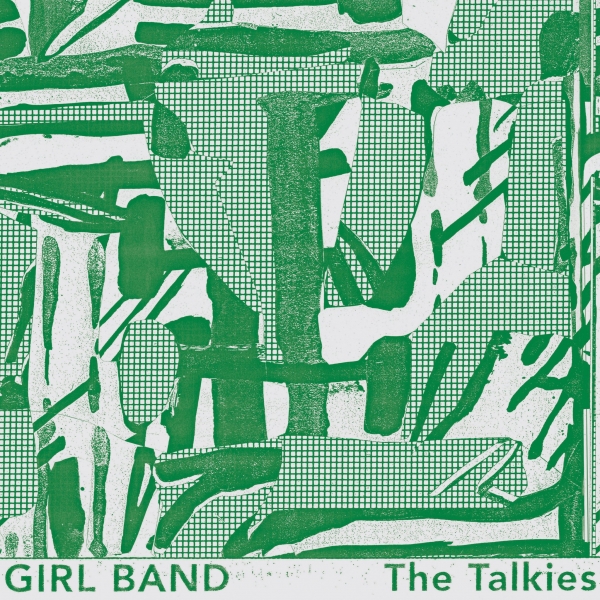 In the internet age of “too long didn’t read”, the “holy fuck” exclaimed by my wife in response to the violent break found in “Laggard” should tell you all you need to know about The Talkies - Girl Band’s petrifying and spectacular second full-length record.

It is important to note that this was by no means her first experience of the Irish noise-mongers. Thus this was not a statement uttered by the uninitiated. Nor was her profanity provoked by repulsion or disdain, which in the spirit of co-habitation, often results in a hasty song change in our home. Her statement was in fact, one born of dumbfounded glee, incited by the sudden, visceral cacophony emanating from the speakers within our living room.

Following arguably the sweetest vocal melody lead singer Dara Kiely has ever sung on record, his voice momentarily offers an ominous hint before sharply metamorphosing into a feral and incomprehensible bark at the climax of “Laggard”. His distressed calls of “What a total cod” are the brutal culmination of a track that feverishly toys with volume, and turbulently snakes through wailing, siren-like guitars; piercing rimshot rhythms; and furious blasts of percussion and bass.

The impact of these sudden sonic shifts are greatly enhanced by Girl Band’s emphasis on groove, atmosphere and patience on The Talkies. It allows the four-piece to consistently beguile and wrong-foot their audience. Consequently, it makes The Talkies a rather disconcerting listen, as one never truly knows what to expect next from the four-piece. “Salmon of Knowledge”, for example, swells with noise and pained screams before reverting back to a soft groove. Lead single, “Shoulderblades” contorts itself through varying passages of tumultuous noise, as Kiely's barbed howls are later framed by disquieting demands for silence.

Whilst several tracks tease the listener and build tension without ever truly releasing the pressure valve, others viciously combust. “Prefab Castle” gently builds with a glitched riff before fracturing itself into multiple nightmarish motifs. Technically reminiscent of a cinematic fast-cut, these motifs rapidly cycle and then reconstitute themselves into a devastating techno—inspired groove. Similarly, “Going Norway”, spontaneously accelerates with a vocal melody akin to “Pears For Lunch” from Girl Band’s debut, Holding Hands with Jamie. The humorous “Couch Combover” also finds Kiely manically erupting, declaring that a figure “Gave birth to a fax machine” amongst chaotic guitars.

The production greatly adds to the atmosphere conjured on the The Talkies. Inspired by Beastie Boys’ “Paul Revere” and the backwards dialogue of Twin Peaks’ infamous red-room sequences, “Aibohphobia” constructs a dense soundscape of palindromes and reversed instrumentation, which later obliterates itself with coarse rumbling bass.

Furthermore, the splicing of multiple recordings from the different rooms of Ballintubbert House, where Girl Band recorded the majority of their second record, thrusts the listener within the heart of the stately home. The sonics allow the listener to metaphorically voyage through its corridors, while the band perform the record as if they were performance artists within an exhibition. Instruments and vocals organically move from striking intimacy to distant and ambient, creating a unique world for the listener to explore.

For example, the excellent “Caveat” initially finds Kiely’s vocals up-close and clear. There is an intense sense of intimacy and one can imagine standing directly in front of Kiely and feeling his breath as he drawls, “Scale electric/Vampyroteuthis”. As we then explore the bowels of Ballintubbert House, Kiely’s vocals become distant and almost lost within the mix. His screams repurpose themselves as haunting reverberations through the corridors of the stately home, as we reposition ourselves to witness drummer Adam Faulkner furiously striking hi-hats to piercing effect.

There is a juxtaposition to be found within The Talkies, which makes it a fascinating listen. Thematically and sonically, the Irish quartet’s second record is a coherent record, but it is also persistently engulfed by the psychopathology and sequelae of psychosis - a state where one can (dependent on the severity of the psychosis) present as entirely incoherent.

With pronouns purposefully avoided, Kiely placed emphasis on the weight of words and sounds, when assembling the lyrics for the twelve tracks found on The Talkies. This device warps words to the point of unfamiliarity and language to the point of abstraction. Yet, whether intentional or not, Kiely’s lyrics mirror the psychiatric phenomenon of formal thought disorder. The words when visualised resemble word salad and over the course of the record there is evidence of neologisms (“guilloti-eenager” in “Laggard”); clang associations (“Mechanical Boil, Ball, Boil, Bull, Ball” in “Going Norway”); and perseveration of language (the repeated “Y in the Byrds” found in “Salmon of Knowledge”).

Although Girl Band’s excellent debut contained repeated references to mental illness (atypical antipsychotic, Olanzapine; meetings with a Dr Murray), The Talkies appears principally concerned by the mind and mental illness. The record itself is bookended by the sound of panic and calm. “Prolix” documents Kiely’s hyperventilation in a panic attack, and warps the sound of his shallow breathing into a surrealist groove amidst unnerving feedback. Closer, “Ereignis”, on the other hand finds composure within Kiely’s breath.

Additionally, the drum-rolls and abrasive screams of “Amygdala” feel apt for a track named after the area of the brain key in the processing of emotion (in particular, fear). Likewise, “Akineton” is the trade-name of Biperiden, a medication used to treat a side-effect commonly associated with anti-psychotics - akathisia (the subjective feeling of inner restlessness). Its racing guitars and fidgeting electronics mimic that restlessness. These shorter tracks therefore are not just filler and augment the possible narrative woven throughout the record.

The Talkies is a devastating and jaw-dropping record that provokes awe and anxiety in equal measure. Although there are elements throughout the record that are ‘quintessentially’ Girl Band, The Talkies builds upon these elements and makes a vast leap sonically and narratively with the aid of unrestrained experimentation. There is a definitive artistic expression found on The Talkies and frankly it should be a late contender for any albums of the decade list.