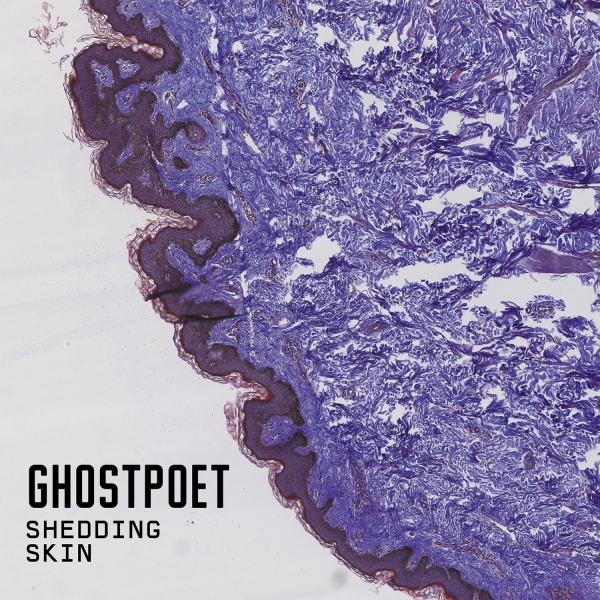 Ghostpoet has, until now, been a gritty realist. Some Say I So I Say Light was an out of body night in; ready meal and a Burial album. The title of his mercury-nominated debut Peanut Butter and Melancholy Jam in itself references a dull domesticity and a strange wistfulness, all topped with Obaro Ejimiwe’s glottal stop, ‘buu-er-nuut’ flow. His indirect, idiosyncratic delivery gave the stories a documentary feel and his electronica sounded like the steely Thames itself: his whole aesthetic felt like the sigh of urban ennui, backed by the ones and zeros of a digital revolution.

But on Shedding Skin, he takes up the rose tinted guise of a tertiary sector Bruce Springsteen, leading live set up of Joe Newman, John Calvert and John Blease. While he’s never strictly been hip hop at all, and his production has always been multifaceted, this marks a distinct stylistic shift. Making what he has described as a ‘guitar album’ (which  features among others Maximo Park’s Paul Smith) invites a whole new set of comparisons. He’s left his safe niche as a slightly obscure, left field, poet and producer, to take his stories to the wider world with ambitions of bandleader and storyteller in the great tradition.

It’s a measure of Ejimiwe’s confidence. Shedding Skin really does feel like a rebirth, emerging from dark night of his previous work, albeit to a hazy dawn. It’s still recognisably Ghostpoet, and strikes similar chords with his slightly acerbic, jagged instrumentation, but the new format reveals hidden influences. He spans a greater depth of sound than before, extrapolating with the three piece, adding synth and strings and his own slurred voice. “Be Right Back, Moving House” blends strings and a euphoric guitar presaging something bigger; it’s fluttering and harmonious and Paul Smith’s backing vocals only feed the idea that it could easily be Guy Garvey’s dixie-horn voice laid on top. A number of tracks sound so much like fellow Mercury nominees The Invisible I had to double check, with that ominous, intricate simplicity. “X Marks the Spot” perhaps charts his evolution best, where the post-punk arpeggios flake away to show the undercoat: an insistent beat and drone synth like a tube train stopping softly.

He retains his fly-on the wall feel, but seems more engaged with himself on Shedding Skin, and confidently showing a more vulnerable side. "That Ring Down a Drain Feeling", is aptly summed up in its title; it’s lost love, charting the spiralling emotions following a chance encounter with an ex. This is Ghostpoet at the peak of his powers; his always engaging flow sometimes sits awkwardly on the beat, but here the two entwine  perfectly. Nadine Shah’s soulful guest vocals evoke Massive Attack, or Skunk Anansie as Ghostpoet gives us the play-by-play in verse.  He mumbles ‘Is that my ex I see before me/new lover hand in hand/I was thinking drat damn/ I was getting over this/I was behind the parapet/but I needed skimmed milk’, and it comes with with metronome precision.

He always seemed one step removed from his subject matter, such was his voyeuristic charm, but his third release sees him more at ease with himself, and finding a greater warmth as a result. He still does his body-swap thing on Shedding Skin, a brooding account of two janus faces, homelessness and mental illness; but it’s on the tracks where Obaro Ejimiwe plays the role of narrator where this new warmth comes through clearest. On "Some Say I So I Say Light" he would say "iBrain playing up and lunch/break eating up with/nourishment and need/then I seek a trusty steed/to overcome the abbatoir/thoughts come regular/but I’m wearing a large". It’s an abstracted, vague dull ache emanating from his grey cubicle. But on “Be Right Back, Moving House”, his opening lines are "love/love will remain/throughout the pain and strain/over the years". Closing track "Nothing in the Way" is a wistful piano number it’s a rose tinted new vision, a step away from the puddles and stress.

He’s lost much of the desperation and many of the downtrodden cries which peppered his first two albums, and crucial to this the natural warmth of his live setup, and the space they afford him. Rather than tightly packed instrumentation, chaotic like the London commute, his band naturally knows where to give him space. It means he can say more, and he can speak clearer.

It lacks the scattergun imagination which provided a safety blanket labelled ‘experimental’, and when a couple of tracks in the last third lack a sharp point, it means the album doesn’t quite take off in the manner it was threatening to. But this time his experiment has been with normalcy, and what it lacks in electronic curios, it makes up for with that warmth, and a definite maturity. The album stands up well as a body of work, and whilst it doesn’t hit the dizzy heights it was threatening to, each track clings to the last with Ghostpoet’s uncanny knack for mood and ambiance. It’s also clear he has no desire to stand still, a restless spirit which marks him out as an artist of substance (Kasabian take note), and probably also marks him out as a Mercury contender once more. For what is a hugely bold manoeuvre, he has carried it out with much aplomb.