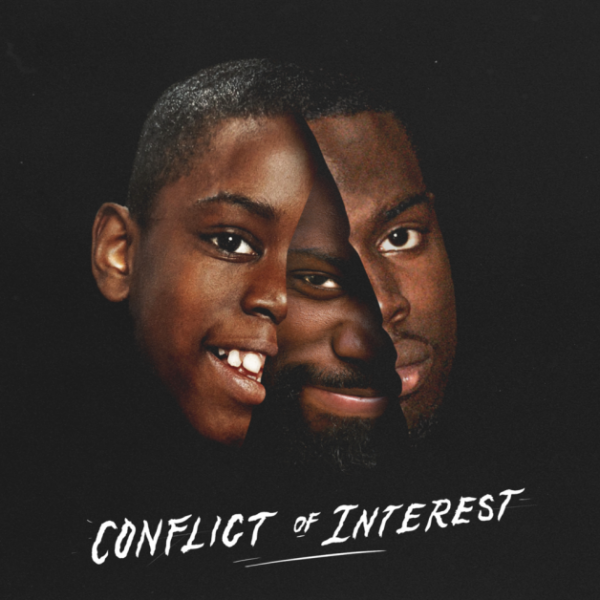 Even after sixteen years in the game, Ghetts is continually finding new ways to keep listeners on their toes. On his major label debut, Conflict Of Interest, the decorated East London wordsmith refines the winning formula of his past long-players, getting up close and personal while still finding room for a plethora of A-listers including Ed Sheeran, Stormzy and Skepta.

Granted, introspection is nothing new for the Newham MC, whose past works have tackled cancer, colourism and voting abstention—but here he lays bare his own story with disarming frankness. On the Emeli Sandé link-up “Sonya”, he vividly recalls his days as a youth offender at HMP Huntercombe, where a girl from his school became his pen pal and close confidante before vanishing from his life without warning. Detailing his fruitless attempts to reconnect, there’s a tangible hint of exasperation in his voice even today.

The subject of relationships is frequently revisited throughout. On “Dead to Me”, he reflects on past breakups and life with ADHD, while on “Proud Family”, he praises his single mother’s parenting and vows to serve as a positive role model to the younger generation, inviting his guitarist brother Kadeem – a member of Little Simz’ band – to take the reins on the outro. This sentiment is reaffirmed on the album’s stirring closer, “Little Bo Peep”, where Wretch 32 and Dave join him in guiding listeners away from the temptations of crime. The latter lyricist also offers a searing social commentary, pointing out the hypocrisy of government-sanctioned atrocities committed by the military, and Ghetts himself is similarly outspoken on the outstanding “IC3”, in which he celebrates Black British excellence while challenging institutional racism and the nation’s colonial legacy.

Opting for atypically pared-back productions, he’s able to achieve a cohesion like never before, with close collaborators TenBillion Dreams and TJ playing to his strengths at every turn. Gone are the twinkling arpeggios and gospel features of yesteryear, replaced by G-funk synths, decorative choral chants and slick, rolling basslines which ensure minimal distraction from his dense multi-syllable rhymes. This barebones approach is pushed to its very limits on the low-slung, patois-inflected Giggs team-up “Crud”, which consists almost entirely of trappy percussion.

Interestingly, another recurring theme on the album is reminiscence—a fact that’s seemingly overlooked on its opener, “Fine Wine”, in which Ghetts asserts “I don’t care ‘bout nostalgia”. “Autobiography” finds him quite literally chronicling his career highs and lows, demystifying the tales behind his infamous beef with SLK and his departure from N.A.S.T.Y Crew. Elsewhere, there’s an abundance of old-school grime samples – Dizzee’s “Ice Rink” freestyle; D Double E’s legendary adlib; a Logan Sama set rip – and even a dedicated section of “Hop Out” where he recites early wheel-up bars.

At the same time, he’s firmly grounded in the present. Men of the moment Pa Salieu and BackRoad Gee are both on top form on the menacing “No Mercy”. The music video for the Stormzy-featuring hit “Skengman” is a bona fide blockbuster, featuring a guest appearance from hotly tipped rapper Shaybo. And with Warner now in his corner, it’s looking like Ghetts may have been onto something when he prophesised in the album’s intro: “My best years are ahead of me.”