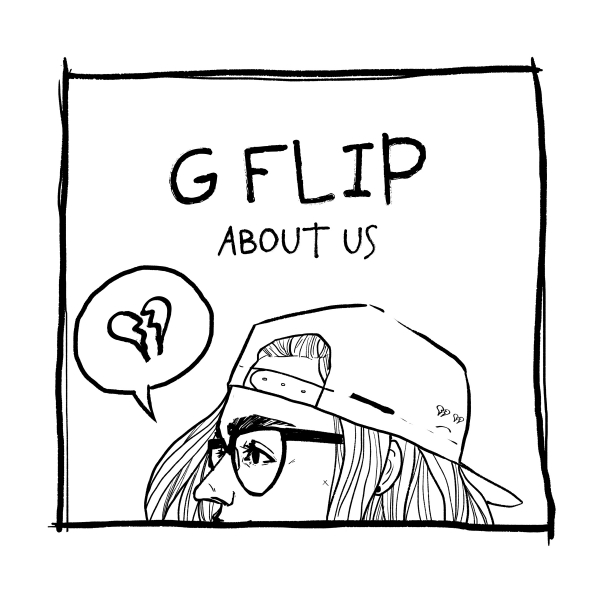 G Flip’s debut album is a collection of relational eulogies, brought together by a bittersweet pop sensibility.

Joining the vanguard of female artists such as King Princess and Billie Eilish boldly defying pop’s historically suffocating restraints, the Melbourne multi-instrumentalist dismisses conventional notions of femininity and heteronormative relationships with About Us. Above all, it's an ode to queer love.

Reflecting on the genesis of About Us, after stirring up no less than 50 million Spotify streams in its anticipation, Georgia Filpo said, "I wrote so many songs about my on-and-off relationship. I hadn’t seen this girl in a year, so when we caught up at the end of 2017, she asked me what I’ve been doing and I told her I had written a heap of songs, and that I was going to try it out as solo musician now. I showed her all the songs and asked her one important question; 'Would you care if I released these because they’re all about us?' Luckily, she didn’t mind, otherwise out of respect to her, this music would never have seen the light of day. It made perfect sense to call my debut album 'About Us'."

Just as her relationship was on-and-off, her music further embodies contradictions and dualities. Its capacity for joy is as equal as its capacity to strike a personal chord, disturbing the dust on memories we’d thought we’d left behind. With her roots as a drummer, there is little wonder that G Flip has a reflexive instinct for visceral instrumentation. While the lovelorn lament “Morning” delivers sincerity through its piano undercurrent, she repurposes the keys for the infectious, upbeat “Drink Too Much” all rasping vocal edits and throbbing basslines. It gleams and coruscates with pop appeal; low-hanging fruit music ripe for the taking, primed to be a hit. In a genre dominated by gloopy production that is almost a caricature of its former self, G Flip is conscious to create an equilibrium between traditional arrangements and contemporary acoustics.

Though her wounds weep on “Bring Me Home”, as she embraces her weaknesses, confessing, “I need you to bring me home / My life is out of control”, About Us is not all shade with no light. G Flip counteracts vulnerabilities with strength with the defiant “I Am Not Afraid”: over propulsive strings, she insists, “I am my own home” in the face of poisonous dependency, with a final, powerful drum solo that is a statement all of its own.

The brushstrokes the production takes on the likes of “2 Million” and “About You” are soft, and while this is to an extent sonically beautiful, you can’t help but feel it is lacking. Often, the layering between vocals, effects and instrumentals feels disjointed rather than blending seamlessly together. Soft though it is, isn’t quite soft enough. While the slower ballads serve G Flip’s heart, masted bravely to her sleeve, she is at her strongest on tracks with an electronic touch. “Killing My Time”, with feather-light synths, emphatic, skittering drum rolls and groove-worthy bass gives it such an interesting texture. This, coupled with “Drink Too Much”, are the jewels in the crown of About Us – they are unquestionable hits, without compromising on emotional sincerity. If only there were more like them.

While her debut album is a triumphant portrayal of the matters of the heart, and while her talents are sharp and unequivocal, this is not the peak of G Flip’s powers – and rightly so. Like all great debuts, it sells itself on its strengths and intrigues with its absences. It is only, after all, the beginning.