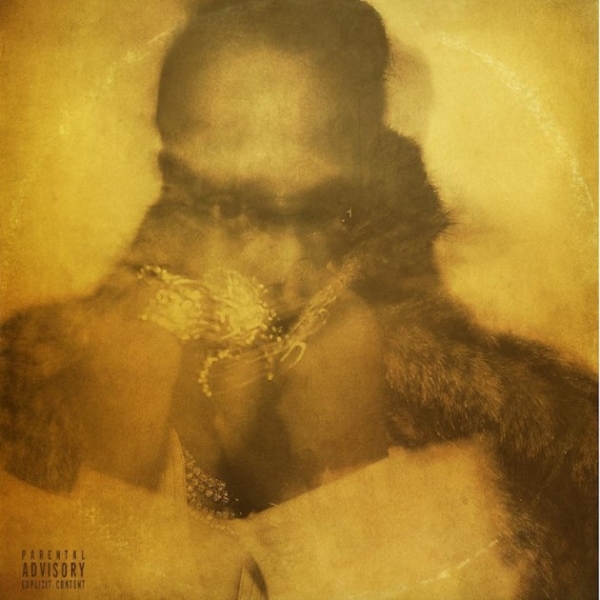 In a recent interview Future spoke at length about legacy. He talked obsessively, almost in circles, about how he wanted fans to conceive his body of work and his sound as an incomplete whole.

17 songs, all Future: this eponymous record, which comes at an interesting juncture in his career, is a bold attempt at this kind of panoramic exposition. Though, while this project displays signs of Future pulling in a new direction, the overall synthesis of styles and aesthetics is rarely more than a symbolic gesture.

Future’s musical progression has been a captivating one. His first two commercial projects, Pluto and Honest, were loose, expansive things - full of room for error, exaggeration and the right kind of sloppiness. Back then, Future liked to shift the emotive gears throughout an album. Both were remarkable for their sheer range and pace of change - simultaneously wild and bruising, euphoric and tender. But there was a secret sadness quivering in Future’s melodies: the tragic irony expressed in "Neva End" is that everything eventually does. Transitioning from 2014 into 2015, in a period of frenzied productivity, Future’s music twisted around this dense existential core. On Monster, Beast Mode and 56 Nights Future took that one unspeakable truth – that living is suffering - and channeled it into an exceptional trilogy of mixtapes that were as chaotic and tormented as they were exhilarating. On DS2 the products of this furious catharsis were refined and converted into something more lush and cinematic. Since then – barring some significant exceptions - Future’s occupied a frustrated place in the limelight, straining for originality in a market oversaturated with artists and beat-makers all applying variations of the same increasingly exhausted formula into creating hits.

This project, like a few other recent mainstream trap releases, suffers from some major structural deficiencies on the production side of things. At his very best, there’s a natural interplay between Future’s vocals and the producer’s beats, a push-pull dynamic enabling Future to sprawl freely into the spaces just ahead of him, before being snapped back into place, and so on. "Wesley Presley", off Monster, is a good example of this relationship at its most outwardly experimental. Production-wise there’s nothing anywhere near as facilitating on this album. "Massage in My Room", "Zoom", "Poppin Tags", "Flip", all share almost identical drum patterns. For all their tangible emphasis and despite Future’s possessed energy on these tracks, their net impact is vaguely neutral. Which is a shame, because for the most part Future’s rapping (over one hour of it) is incredibly tight: “Giorgio Armani, I’m drippin’ in it / Aston Martin, I’m whippin’ in it / Shit gettin’ too specific / Ten black whips I’m too consistent / To my foreign bitches, tell me if I’m too persistent.”

Packaging Future’s multiple alter egos into one project was always going to be a difficult task. As a result, this record only ever makes superficial reference to the mood and emotive landscapes of past projects: 56 Nights on "Rent Money", DS2 on "Mask Off", Beast Mode on "Might As Well". Instead, it might be the first Future project in which the individual formal details that shape a song are more interesting than the accumulative effect they produce. On "I’m so Groovy", Future’s applying delicate layers to delicate layers, fluidly assembling all sorts of interesting cadences and rhythms; the looping of Future’s timourous ‘hum-hum’ doubling up as an interesting percussive accompaniment to the harmonies. "I’m So Groovy" is the unalloyed joy of an artist in what feels like full improvisational swing, stumbling into a pocket, and instinctively tracing its fresh contours for further passages. Elsewhere, there’s a subtle return to the playfulness and elasticity that marked elements of Pluto. On "Draco", Future pursues each swirling melody to its climax, before slipping into an entirely different pitch altogether and doing the same again, without ever straying off course.

"Might As Well", "When I Was Broke" and "Feds Did A Sweep" forge a moving trinity of songs that play to Future’s strengths as an old-fashioned songwriter, storyteller and street-rapper. These are – on one level – stories about escaping all the burning injustices of the world. They're about success. "When I Was Broke" talks past loves and loyalty throughout the come-up: “I had to climb up out the sewer / Know you looked down, but I know where I’m going.” But what’s best expressed in Future’s music is always what’s not said literally – apart from when it’s said literally, like it is on "Feds Did A Sweep": “You don’t wanna feel my pain /It’s gonna’ drive you insane.” Pain is the unyielding constant underlying all of Future’s work, and the emotional conflict contained in this tragic binary – between the struggle and the success – is glimpsed in a few fraught lines that owe everything to the torn, melancholic strain in Future’s register: “Cartiers, I got privilege / See the way my dawgs livin’ / They always gotta’ dodge prison / I was born dodgin’ penitentiary / I bought my mom French Tiffanys.” ‘Feds Did A Sweep’ is a dense, tangled narrative detailing years trapping, dodging police; finding an escape and a way out in music, and grieves for those lost or left behind: “Better learn about the history / I was touchin' work in elementary / Got it cookin' work and skippin' chemistry / Then I started speakin' poetry / I just wish my dawg didn't ignore me / Told you.”

Where this album will sit in Future’s arc will be defined by where he decides to take things next. On the parts of this album that are worth remembering there are subtle signs of a stylistic and emotional shift. You can sense Future dabbling in the extra-rhythmic potential in his vocals, and there’s a delight in Future’s register that’s been notably absent on his records since after Honest – like picking up an old instrument after years of letting it gather dust. In other words, he sounds like he’s enjoying himself again. FUTURE falls below the mark. What’s important, however, is that Future seems to acknowledge change and reinvention, even if this record doesn’t achieve either. Change can be a slow imperfect process. And, speaking on imperfections, Future summed it up perfectly on Twitter: “ain perfect…so fuckin what.”