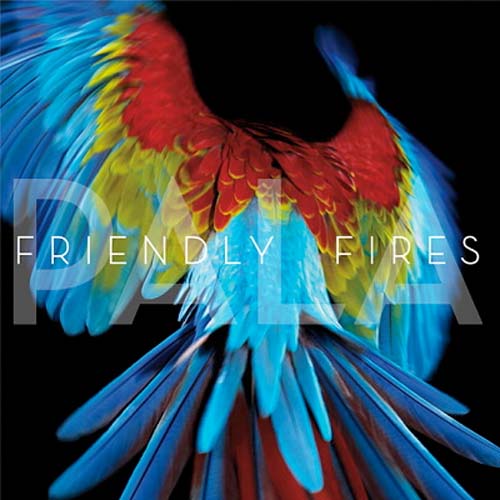 It’s strange how Friendly Fires have been so successful without ever really having a proper hit single. Ok, so there was their slightly-limp-but-fairly-popular debut, ‘Paris’, but that failed to even make the UK Top 100. Then there was ‘Jump In The Pool’, which still missed out on a Top 50 chart position, with ‘Skeleton Boy’ faring only marginally better. And what about the totally unremarkable and completely forgettable ‘Kiss Of Life’? That performed slightly better than previous three, reaching the dizzy heights of number 30, but it still rounds off a pretty disappointing track record for a band of Friendly Fires’ stature.

But Pala could change that. All of the Good Bits from their eponymous debut album are still present – the rolling, percussion-laden beats, the infectious hooks, the borderline-anthemic choruses – but they’re a whole lot more powerful than before, and now they’re joined by Some Even Better Bits too. The drums are heavier, the synths are less sparse, and the melodies are catchier; Pala is unmistakably a Friendly Fires record, but it’s a whole lot beefier than the Friendly Fires that we were introduced to a few years ago.

And it’s largely the ambitious production that sets this record above its predecessor. The opening track, ‘Live Those Days Tonight’, fades in with a prelude that wouldn’t sound too far out of place on Welcome To The Pleasuredome, before dropping into Friendly Fires’ signature tumbling beat with staccato synths and piano chord stabs. It’s an expansive track that adds a bass-heavy, club-orientated edge to Friendly Fires sound – and it’s by no means the only track on Pala that emphasises those electronic elements.

You’d be forgiven for thinking that you can hear Daft Punk samples in ‘Blue Cassette’ and ‘Hurting’, with the former building on the foundations of blurry-eyed euphoria that were laid down by ‘Live Those Days Tonight’. The latter of the two, meanwhile, is a strutting, hook-laden floor-filler in the making, with a synth line that sounds peculiarly like the riff from Grandmaster Flash’s ‘The Message’, and an overall feel that isn’t a million miles away from that of the aforementioned French duo. The funky bass line and cowbell-heavy beat of ‘True Love’ also seem to have their roots in old-school disco-house – so much so, in fact, that you can’t help but succumb to a form of mental violation as the unsavoury image of Ed MacFarlane writhing and shaking his skinny-jeans-clad booty worms its way into your brain, searing itself onto your retinas where it remains for hours on end. Or was that just me?

Moving swiftly on, the album’s title track, ‘Pala’ brings a welcome change of pace at the record’s halfway point, with its spacious production and MacFarlane’s half-whispered vocals. But it feels like little more than a calm before the storm, as Friendly Fires really pull out all the stops after ‘Pala’, with the soaring choruses of the anthemic ‘Pull Me Back To Earth’ and the more subtle (but equally brilliant) ‘Chimes’ being two of the strongest moments of the whole album.

At times Pala is pulsating and euphoric, at times it’s spacious and contemplative – but it never ceases to be inescapably intoxicating and surprisingly fresh. It would be completely at home whether being played in a sweaty, packed-out club in the early hours of the morning, or through tinny portable speakers on an anonymous iPod on a hazy summer’s evening. Friendly Fires have managed to develop their sound on the infamously tricky second album, without forgetting about the elements that made them popular in the first place. Let’s just hope then, for Friendly Fires’ sake, that the music-buying public feel the same.