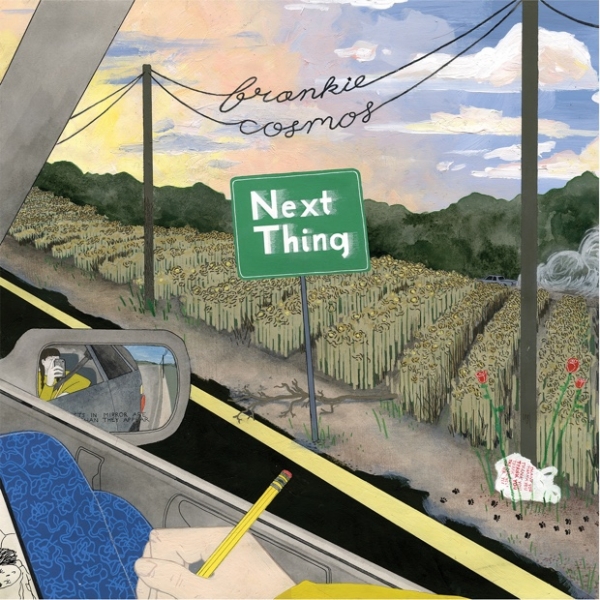 With songs more like short poems than conventional pop tracks, Frankie Cosmos arrives with Next Thing, all tales of touring, age and self-doubt set against a cheerfully upbeat musical backdrop

A lot of musicians sing about themselves, but often couch their ideas in so much abstraction you don’t really get the sense of who they are. Perhaps it’s a defence mechanism; being laid bare but holding a towel up for modesty, because well, it’s personal under there. Cosmos cuts to the quick at her own expense - she knows it, and you can’t help but respect such candour.

To pick and choose, there are generic references to her self-doubt like “I’m just dust” on "Too Dark" and feeling “washed up already” on “I’m 20”. These get darker and more specific as the record progresses, as “I guess I make myself the victim like you say” on ‘Is It Possible/Sleep’ worryingly states. There are references to trying to look cool, or asking if it’s cool to not care. It’s consistently self-analytical - it must be tiring being her, but it’s a frame of mind you can easily identify with.

Where you’d think all this naval-gazing would be depressing, it’s actually surprisingly fluffy-sounding, as the up tempo guitars spread an optimistic sheen across the canvas. Her youthful voice is recorded in an isolating style that makes the delivery very personal and immediate, harmonising with the intention of her lyrics.

As it is so introspective, unfortunately it does lapse into indulgence. Songs about her bandmates lack the resonance of her more universally understood lyrics and feel out of place. The very catchy, but borderline annoying hook “I haven’t written this part yet/can you help me write it?” from "Outside with the Cuties" is either genius or pretty childish, and that’s sort of the impression Next Thing leaves behind. It’s hand-drawn, sketchiness is charming, yet makes it seem incomplete. A look at the stylised artwork says much about the music.

Ironically it improves with age, so pop it on little and often - most tracks are around 90 seconds anyway - and let it grow on you.