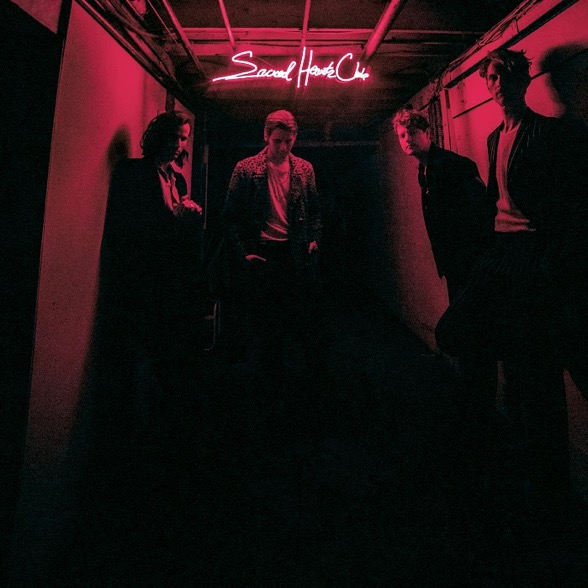 If there was ever the perfect illustration of peaking too soon, Foster the People hit the bullseye.

Industry catapult “Pumped Up Kicks” was a banger enriched in gloriously buoyant indietronica, the band’s 2011 debut LP Torches blasting car stereos with its anthemic brand of West Coast indie-pop, whilst flaunting sufficient sonic quirks to satisfy those who perceived themselves slightly cooler.

After the mixed reception of a more psych-tinged, guitar-focused sophomore effort, 2014’s Supermodel, the pressure was on for a third record to either recapture Torches make-you-dance mentality, or to opt for a complete sonic rebrand. Unfortunately, though, such attempts fall flat from a band who seem to be enduring a painful decline into an inescapable identity crisis; Sacred Hearts Club is a hotchpotch of tracks which don’t appear to work together as a collective at all.

This confused mixture is not to be muddled with being in any way eclectically progressive, as attempts to flavour the album with a sprinkling of curveballs simply comes across as try-hard. “Lotus Eater” is a shy effort at a bad boy image, with slightly grungy guitar and brash-yet-basic lyricism; “Sorry I was late / I didn’t wanna come”. As a personal track on the theme of drug addiction and the gratification of pleasure it would have been admirable to see some more thoughtful song-writing than the likes of “Molly was the loss of me / yeah it was a tragedy” – thematically the song has the scope to maintain some real poignancy but regrettably it’s made to sound almost trivial.

In fairness, though, similarly themed “Loyal Like Sid and Nancy” boasts banger potential whilst simultaneously encompassing careful introspection. This time the band prove both musical and lyrical competency with trap flavoured beats and a drop to turn festival crowds into frenzy, Foster replacing his infamous falsetto for spoken word in climactic tone. “We’ll all pretend one day we’ll be the greatest of the Gatsbys / growling mouths with rabies / loyal like Sid and Nancy” – Foster ponders his fate through characters who experience tragedy following success.

As a whole it is unfortunate that the majority of the record fails to reach this standard -barring the unapologetically catchy, Torches-esque guitar riff on title track “Sacred Hearts Club”, to be kind. “Sit Next To Me” is a mediocrely funky pop song about chasing a girl; a little anticlimactic considering Foster the People’s past focus on issues of identity and politics – “Just come over here / sit next to me / I’ll take you high”. Singles “Doing it for the Money” and “Pay the Man” are simply forgettable cuts with no particular heart, whilst saccharine, bass-driven track “I Love My Friends” is fated to soundtrack a Facebook ad.

If interludes “Orange Dream” with its distorted organ psychedelics and “Time To Get Closer’s” doo-wop inspired dream-pop were full-length tracks then we may be looking at a different album, but unfortunately Foster and co fail to produce these past sixty-second instrumentals.

Sacred Hearts Club is record of frustration on the listener’s part – we know they’re capable, but Foster the People have again failed to recapture the brand of youthfulness established in their hype-fuelled industry breakthrough. Equally, they fail to mature into an alternative sound with adequate craft to entice attention.