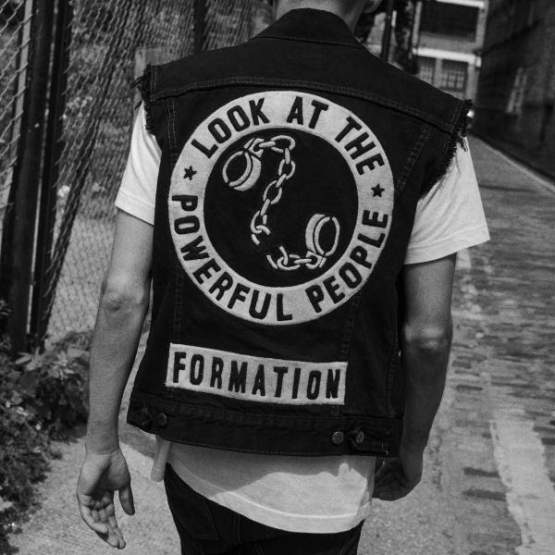 The cowbell-assistsed rhythms, funk-edged basslines and half spoken vocals of opener “Drugs” may show signs of an underlying LCD Soundsystem admiration deep within Formation’s psyche, but as their debut album progresses it becomes clear that the influences upon Look At The Powerful People stretch back far futher than 2005.

Magnify in deeper and snatches of 80s post punk and 70s funk can be found simmering barely below the surface. Formed with the initial idea of creating three minute long explorations in pop, the outcome of Formation's efforts is a seamless stream of highly energised music often indebted to dance scenes as much as anything more traditionally indie.

There’s a dark undercurrent to “Pleasure”; a punk-funk influence lies heavily at its foundations to such a degree that it sounds like an updated version of The Rapture after having been given an electronic makeover. These things are shifted right to the front on the punkier “Buy and Sell”, but there's enough variation apparent to stop it from falling into the trap of reworking the same songs.

“Back Then” - with its driving bass, atmospheric synths and latterly jazz-strewn breakdown - shows a band comfortable with the idea of stepping outside of what normally defines convention, while “On the Board” shows an electronic influence and a band unafraid to seek and then see out a rhythmical groove to its logical conclusion.

Formation are at their most straightforward on “A Friend”, showing signs of being more complicated and experimentally minded cousins of The 1975, but fall somewhere short of having the intensity of previous touring partners Foals. It's still early days, but this London-based quintet have delivered a debut with all the hallmarks of a band who will continue to refine their own distinctive niche.