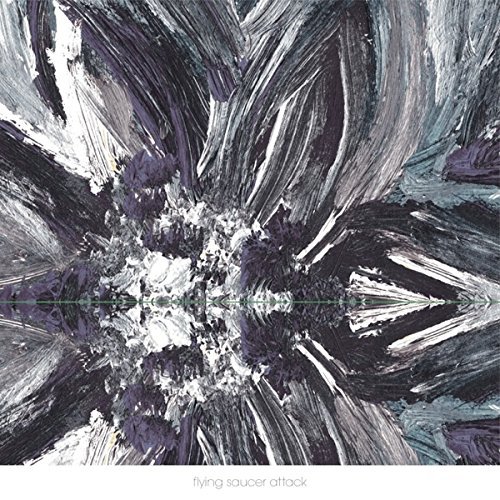 With their would-be American counterparts in Sebadoh, Guided By Voices et al. concocting homespun, genre-splitting DIY indie rock across the pond, Bristol’s Flying Saucer Attack set themselves apart amidst the seismic rumblings of Britpop back in 1994, all but reconstituting British experimental rock with brazen lo-fidelity on their stellar self-titled debut album.

Beyond the lingering spectre of The Jesus and Mary Chain, Flying Saucer Attack were something of an incongruity, clothing the emaciated skeleton of British shoegaze and experimental rock for a new age with the admirable (and ultimately very astute) aspiration to please no one but themselves. Two decades and a scattered series of releases later, Instrumentals 2015 sees Pearce return after fifteen years AWOL, still resigned to the proverbial spare room, stripping the alchemical glory of classic FSA back to its core: guitar.

Accompanied by a gentle recommendation to experience the album in its entirety - "the better to appreciate its deliberate emotional arc” – Instrumentals 2015 has effectively zero physical or nominal context for newcomers or fans alike. Instilling something of a Brian Eno-like sense of import from the off – thereby tipping its hat to innumerable 90s post-rock releases in the process – the immediate milieu is one of abandoning all indicators and any sense of precedent or historical trajectory. In much the same way that Pearce never entertained the whims of custom or trend on their early material, there is a real sense that this resurgence is an attempt to convey a narrative with a profound emotional resonance without kow-towing to lyricism, designation or grandiose clarification as to what to expect.

Unravelling on the foreign whirr of “Instrumental 1” – a teasing, introductory overture doubling up as the sound of a bygone vessel’s return trip – the sparse abstraction of its follow-up sets the cogs of reverie in motion. With Pearce summoning chiming church bells with his guitar, recalling the likes of Kranky iconoclasts Labradford, a gradual sense of the aforementioned “deliberate emotional arc” becomes clear, particularly when the track feeds into the ominous “Instrumental 3”. Driven by its masterfully panned tapestry of Middle-Eastern scales reminiscent of Cul De Sac, Godspeed You! Black Emperor, and Pearce’s much beloved Popol Vuh (a band who lent their name to one of the peaks on FSA’s debut), guitar lines are progressively swallowed up by a dense chamber of reverberated noise, dispossessed shapes melding in a panoramic mesh conjuring Tim Hecker and Hammock.

Meditative preamble concluded, the siren-like Instrumental 4 feels much more imperious. A blossoming dronescape steadily shedding its doom like the petering out of an atomic bomb’s mushroom cloud, it yields to a swarming radiance that comes to define the most powerful characteristic of Instrumentals 2015: the subtlety of its incandescence and the potency of its measured sway. Nothing here is ridiculously complex or compositionally radical yet the picture of desertion, illumination and refrain that Pearce paints becomes increasingly lucid – undeniable even – as the album extricates itself from nothingness into a space of exaltation akin to Ben Frost’s A U R O R A and Talk Talk circa Spirit of Eden and Laughing Stock.

With “Instrumental 5” serving as a footnote of sorts to the album’s second period of respite, the punishing scourge of Instrumental 6 is a very welcome aide-mémoire that there’s variation amongst the general uniformity, Pearce’s waveform-abusing blitzkrieg channeling the sound of an unidentified body hurtling back to earth at lightspeed, disassembling before crashing out of view. Putting his many years of trial and error with guitar effects to good use – recorded, primitive as you like, on tape and CD-R – Pearce musters real magic here, cleansing his imagined world with a passing, necessary apocalypse. With tracks 6-9 forging to construct a sublime twelve minutes of luminous drone, tracks 10-13 sees Pearce revert back to measured arpeggios and elegantly sculpted sonic landscapes that induce thoughts of Texan drone pioneers Stars Of The Lid and Japanese minimalist Chihei Hatakeyama.

As expected, however, the real pay-off arrives at the very end. With its plaiting phrases of reverse guitar dancing on a bed of reverb-soaked noise, “Instrumental 14” captures Pearce eliciting images of the skyline tearing opening at twilight, clumsy evacuations in slow-motion and a growing sea of people cheering on the end; a drunken congregation on the coast. Better still, at just under ten minutes – fittingly, the longest track here – closer “Instrumental 15” swells its beatific splendor one last time, a fizzling out of the final Catherine wheel before flickering away into another faded greeting with oblivion, wordless and without goodbyes.

Whilst it can often be easy to jerk the proverbial knee and overstate an instrumental album’s implication and worth, David Pearce and Flying Saucer Attack have once more positively set themselves apart from others of their ilk on Instrumentals 2015. While this isn't the best starting part in the FSA story (for that is most certainly the beginning), it’s a prospective definitive soundtrack to gliding through the outer echelons of space, having shed all ties to this revolving speck of rock – and all the above. In excelling at hoping to convey music – or in this case, a suite – with a deliberate emotional arc, Pearce has re-established himself as an auteur to be reckoned with, delivering one of the very best albums of the year in the process.