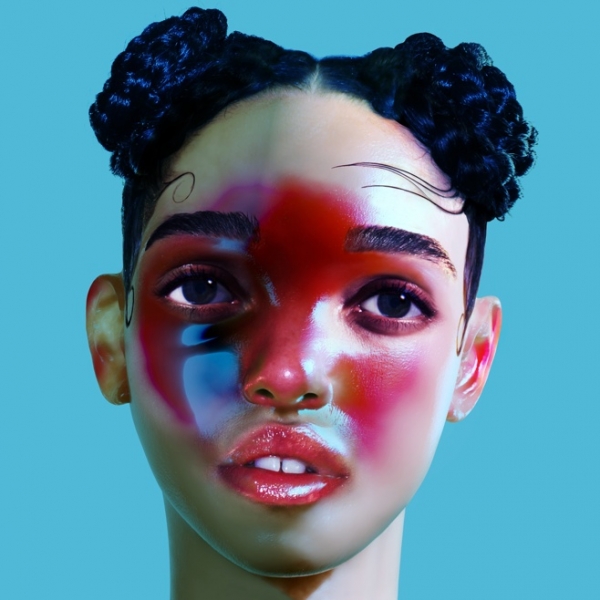 The notion of using a certain palette of sounds to convey immense negativity and loss is not a new one. In fact, it’s a pretty well-worn route these days, with anyone with a soulful bent tripping over their own feet to use the ‘clicks + whispers = gold’ method. It works, it does. It is wearing thin however, and it takes something, someone special to make us take note nowadays.

Her birth certificate may say Tahliah Barnett, but she’ll be FKA Twigs to us evermore. In the past two years, the trained dancer (you may remember her from videos such as “Do It Like A Dude” by Jessie J) has gone from sideshow to main eventer, with EP1 and EP2 doing a helluva good job at geeing up the salivating masses. “Papi Pacify”, with its now-iconic video, depicting an uncomfortable amount of footlong fingers in her comparatively minuscule mouth, choking with awkward eroticism and squirmy rubbernecking, and the reverent reverberations of “Water Me”, whirred up the hype machine until it was frothing like a rabid hound.

Although at the root of everything that Barnett was accomplishing, her music was scarcely the focus. All the hubbub and uproar was galvanised from her AV shenanigans; the way she distorted and warped her face to outlandish, statement-making sizes. There was the rampant, charged sexuality and chilling CGI, masterful kinetic gambits and the gloss of black latex. A cult of personality volcanoed from nothingness, with throngs of onlookers ensnared by music videos and a taciturn Barnett pulling a Burial. There’s hype, and then there’s the cacophony surrounding FKA Twigs and her every twitch.

Funny thing is, on her debut album, entitled LP1, we don’t see those noise-mongering ditties that everyone’s au fait with. No “Papi Pacify”. No “Water Me”. No “Tw-Ache”. Unlike Haim or Chvrches, whose debuts were stuffed with EP fillers and prior singles, Barnett’s first foray is almost entirely virgin territory.

Although, the sound is all very familiar in one sense – it’s traumatic and tender, it’s sparse and frail – it’s also completely otherworldly. A bizarro take on R&B, seizing and erupting with the jolt of surging electricity; there’s a matte pulse of bass here, samples of broken glass or car alarms there, and instead of beats, the sound of a skeleton falling down a staircase in slow motion. Barnett, and her cabal of producers (including, but not limited to, Paul Epworth, Sampha and Dev Hynes), jury-rig a possessed, soul-infused machination. A creaking automaton, gushing steam from armor-chinks, and clattering with each agonising step, it blends ecclesiastical urban hymns, neo-classical art music, ambient electronica, ‘90s R&B, pop, soul and all essentially all mutations of modern dance.

Akin to Halls his more elegiac moments, the record’s highlight – “Closer” – takes the essence of a tearjerk eulogy and wraps it up in a futuristic coating, like some kind of sorrow-laced pig-in-a-blanket. At times, as on “Preface”, she spasms through crumbling chancels, Barnett’s choral coo distorting through demonic electromagnets, ocean-filled lungs and Poltergeist-static as if foolishly stoic faced with the abrupt void. “Closer” is a solemn hymn for a decrepit future, with sample-heavy synths and ambient R&B backing her death-rattle: “Isolation/isolation/isolation…”

“Lights On” is a supernova at the other end of the spectrum. It’s stringently mellifluous, foaming with melody and fluid grace. Most of her tracks rest on a taut tune, but they’re often cracked and dispersed – for example of “Pendulum”, with the hook-diaspora floating between gizmo chirrups and the staggered techno-yells. On “Lights On”, a paean to making luuurve, Barnett is explicit. She oozes an unseen bravado. There are dark implications: is this a momentary lapse in anxiety? Is this her skin peeled back, beaming true colours? It may still seem fraught with terror: “When I trust you we can do it with the lights on…”, but delving into semantics, she’s knowing. She’s not some flimsy damsel. It’s “when I trust you”, not “if I trust you” – she’s expectant. There’s a confidence in where the relationship is going. It’s subtle, but it implies a more Machiavellian side to the siren-song of Barnett as she takes the psychological control of the situation. There’s more scalding fury, primal energy and swaggering confidence than she lets on initially. Perhaps it’s too deep a reading; perhaps, like the deep-sea angler fish, she’s lured us close with something hypnotic, so utterly transfixing, that we won’t see her lethal strike until we’re spewing merlot from a perforated jugular.

Whether the above is true or not remains to be seen. Regardless, it is testament to the depth available. It’s an ambiguous record, erring towards certain scenarios and emotions, but ultimately, you can glean a variety of readings. It’s not a record that’ll smack you in the face with bolsh and pace, and so in the inevitable repeated listens, as you listen harder, you’ll find yourself scurrying through various interpretations of the lyrics – is “Video Girl” about fame and image-obsession or is it about self-confidence? Is “Two Weeks” filthy or comforting?

In a climate where instant gratification is rife, where the adhered-to pop formula of massive hooks, massive beats, dumbed-down lyrics, monosyllabic choruses and plastic parping pap, this is a complex beast, and one that can’t be defeated overnight. LP1 is not an easy record by any means – though you may be lucky enough to be completely besotted on first sight. Like any relationship, it demands work and effort; if you’ve been hooked by Barnett’s early noise (admittedly, tracks like “Papi Pacify” are simpler to love), then you’ll want to put the hours in. You’ll need to. This longform escapade is the real McCoy, and where the magic happens. The honeymoon period is over.