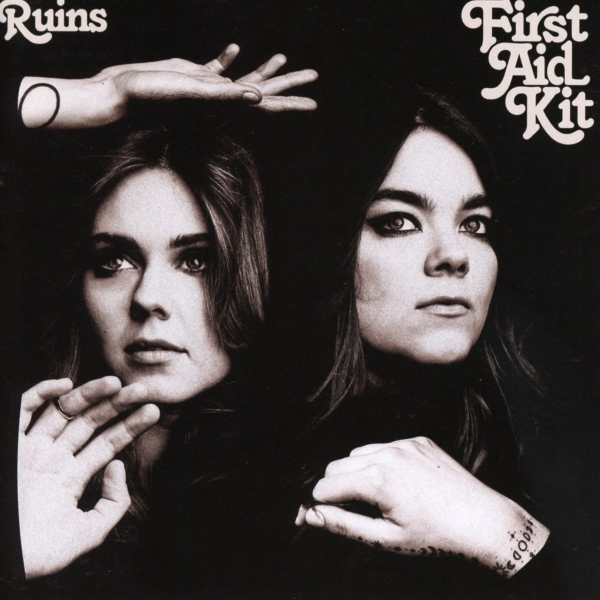 Ruins is First Aid Kit’s fourth album, and their best album yet. The mixture of hymn-like, country and folk tunes encompass a host of themes: songs about heartbreak, anger, sisterhood and unrequited romance. There is more emotion than ever in this record, and a constant bubbling anger underneath each track that often turns into passionate female power.

This angry feminist energy is a continuation of their single “You Are the Problem Here”, which was released on International Woman’s Day 2017. The duo called it angry and direct, a song written out of despair to confront rape culture: “After reading about yet another rape case where the perpetrator was handed a sentence which did not at all reflect the severity of his crime we felt upset and vengeful. We were, and are, sick of living in a society where the victims of rape are often blamed for the horrible thing that has been done to them. Our message is clear and should not be controversial in the least: if you rape, you are the problem.”

Almost a year later, Ruins carries the same emotion on. The new album feels like they’ve stopped caring what people think about them, and stopped fighting against a structure that puts them or their music in a box. The album focusses directly on themselves and other women’s stories of love and life. “You Are the Problem Here” was produced by Tucker Martine, who is also responsible for producing Ruins. Also involved are members of R.E.M., Midlake and Wilco. Martine, along with the guest collaborators, brings a raw and rockier quality to the album, with an infectious rootsy eminence and stirring melodies.

“Rebel Heart” is a strong opening song. It’s over five minutes long but never indulgent. Half-way through there seems to be a natural ending, but then the drums kick in again, lively as ever. It follows a theme of the whole album which is that there is more to say. As women have been routinely gaslighted, told to keep quiet and stop talking, the Söderberg sisters are showing that that day is over, and they won’t keep quiet.

“It’s a Shame” was the first single released from the album. With its classic country twang, swinging organ sounds and poppy lyrics, it forms a captivating but not clichéd pop song. The country sound of the sisters’ influences – Johnny Cash, Bob Dylan, Emmylou Harris – can be clearly heard throughout this song. This single is as catchy as the whole of First Aid Kit’s 2014 album Stay Gold, a catchiness that ricocheted them to success.

Throughout the album, that sisterly singing bond that can’t be taught stands out more than ever before. It is a sound only found in singing siblings and like The Staves, Tegan and Sara or Heart, the matching voices and perfect harmonies sounding fully effortless and instinctive. Nowhere is this more obvious on the album than on “Fireworks”. The emotional lament, pitch-perfect harmonies and the seamless guitar and synth arrangement makes this a stand-out song. As the band describes it, “It's a song about the ideals you set for yourself in life and how they can break you down, leaving you all alone at the end”.

Though Ruins is a fresh style from First Aid Kit’s previous work, their old school classic folk and country styles are never far off. Songs like “Postcard”, with the pedal steel guitar and honky-tonk piano remind you why you fell in love with First Aid Kit in the first place. The ongoing tapping drumbeat makes you feel like you know all the lyrics from the very first listen.

When listening to the more emotional and lyric-based songs, in particular “To Live a Life” and “My Wild Sweet Love”, it’s hard to believe that Klara and Johanna Söderberg are only in their mid-20s. The way they write about the collapse of relationships, unrequited love and female empowerment is far from the MySpace generation of YouTube covers and self-made internet uploads where they started. “Distant Star” covers the fakery in relationships and in the wider world, and how hard it is to carry on in spite of fakery and upset. It ends: “Now I will never know you / You were just someone passing by / And it makes me sad to think about / All the stories and things I’ll be without / But I think I’m getting used to the silence now”. The ending lines of “Distant Star” set the title track “Ruins” up perfectly. If previous albums were calling for change, this album is about trying to accept that what’s done is done, and build on something that has already been destroyed.

“Hem of Her Dress” is the absolute hidden gem. It starts “So here we go again / I know how this one ends” and is about someone you love finding someone else to love. It begins like a giant eye-roll to any ex-boyfriend that has ever told you about their new girlfriend. Throughout, there is a bubbling anger under the surface that is just waiting to get ripped out, displayed by slightly distorted musical chords. It is a representation of how women have been conditioned to be polite all their lives, to follow rules and to not express upset or anger lest they be labelled ‘emotional’. Well, here are First Aid Kit to stick two fingers up to that. There is an ominous middle section that ends “I guess that’s the way it goes”. Just when you think the song is about giving up, there is a beat of silence, then someone shouts, “Here we go”, and a rousing chorus of voices start. It is an anthem women could march to, with crashing brass in the background and a chorus of applause at the end, just letting everyone listening know they will not be silenced.

The sheer musicality of Ruins is something to be in awe of, let alone the inspired messages of female empowerment and the in-depth analysis of relationship culture. It’s a classic high-quality, well-arranged and passionate album from First Aid Kit, but this time – it’s not so innocent.