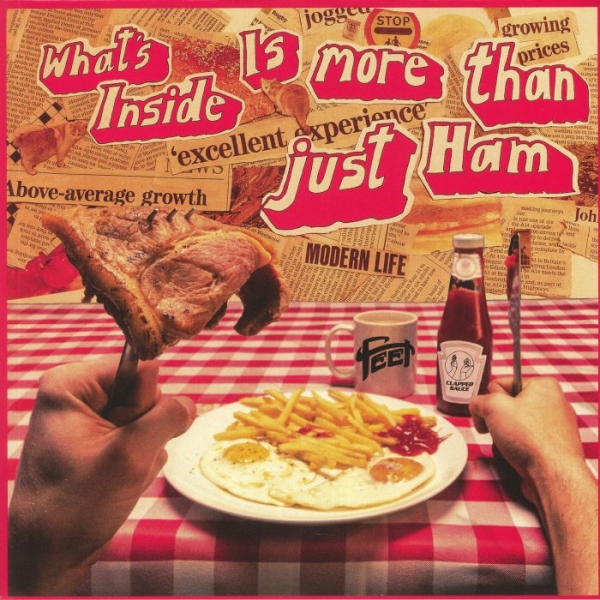 It’s fair to assume that a band that met at university, wreaked havoc on elderly neighbours in a Portsmouth retirement village and caused chaos in rural Bedfordshire would have plenty of funny stories to tell.

Well, Coventry outlet FEET certainly do. When they're not causing mischief, they’ve been busy cooking up their debut album, the absurdly titled, What’s Inside Is More Than Just Ham.

Impossible to pin down to one genre, it skips and lurches between the likes of britpop, post-punk, doo-wop, funk, punk and psych-pop. “Without any real sense of direction or scope, the album became a reflection of the 8 or 9 months we spent moving from place to place writing the fucker,” the band explains, “There’s a lot of things we don’t like. We know more about what not to sound like.” This explains why FEET have created a sub-genre all of their own: crease pop.

With What’s Inside Is More Than Just Ham, FEET paint themselves as the poster boys of this new breed of indie; think Hotel Lux’s “English Disease” or Sports Team’s “Kutcher”, an epic display of wry humour and wit from start to finish. Each track its own diary entry of silliness, coming together to create a scrapbook of playful and jaunty bops. Unconventionally structured album opener “Good Richard’s Crash Landing” even references a local hang-glider accident to really set the tone of the madness that’s about to follow. The time guitarist Harry accidentally disturbed an axe-wielding burglar has been immortalised on “Axe Man” and “Ad Blue” reminisces back to when bassist Oli made tea with the diesel additive.

Produced by Cam Blackwood and mixed by Alan Moulder, each song is plump and juicy with every last crack filled with delightful nonsense. Consistently high energy, the lyrical content spans from dog walking ("Dog Walking") to a homage to the humble hotdog ("What’s Inside Is More Than Just Ham"). While the subject matter is sporadic, the instrumental is tightly fixed on creating driving rhythm and danceability. Funk slapper “Ad Blue” with its infectious groove, the Blur-esque smash of “English Weather” and the meaty reworking of debut single “Petty Thieving” prove FEET’s status as off-kilter kings. Closer “Wiggy Pop” feels like a well-deserved breather. Lowering the tempo and sliding in some Hawaiian surf-rock vibes for good measure, FEET wave farewell to their cracking debut with a potent and poignant, “I’m just taking the piss”.

If you’re looking for an album with a coherent, tangible theme then perhaps this isn’t the one for you. Instead it’s a coagulation of the weird and the wonderful, and just a snapshot of the immense power of FEET. Complete madness, but so much fun.