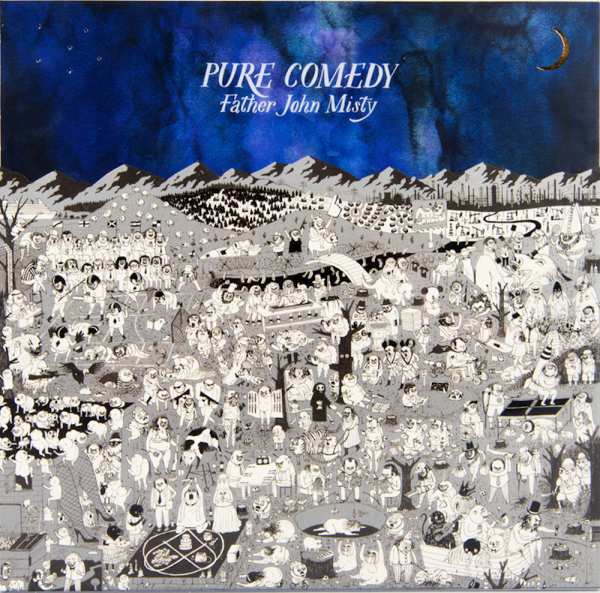 It was always going to be difficult for 35-year-old Josh Tillman, aka Father John Misty, to follow up I Love You, Honeybear - his 2015 career-defining album – but on his new full-length, Pure Comedy, he completely disregards his past successes and instead tentatively focuses on the grim road ahead.

Honeybear stood out as an album about love that was neither passé nor cringe, that is if you have the chutzpah to call it an album about love – it was more of an album about insecurity riddled with randy one liners, serving as an honest portrayal of modern romance rather than a meticulously-planned Instagram brunch with ‘bae’ or a sunset walk with ‘this one’; it was a fucked-up love album for fucked-up times, if you will.

In that regard, it’s interesting just how similar Pure Comedy is to Honeybear, despite their obvious differences. While they have their similarities in terms of core brutal honesty and irony, the subject matters are inherently separated - Comedy serves as take on the pitiful state of modern politics, whereas Honeybear focused on removing bland clichés from music about romance. You shouldn’t fall for the façade that these albums are about politics or romance, though - make no mistake, both of these are albums about the life and times of Josh Tillman.

Having said that, Pure Comedy is a complex album that does address the futility of politics, with “Two Wildly Different Perspectives” serving as best example of what Misty’s trying to say here – political parties ridiculing each other is pointless and gets us nowhere. Who’s right and who’s wrong? How do we know? And, what does that literally even mean?

However, it’s very easy to misread Pure Comedy as an album that’s pretentious, preachy and just generally too long (in the digital age of short attention spans and musical clickbait, the 13 tracks here clock in at a majestic 75 minutes). But, Misty’s charming grandiosity puts his planned preachiness into perspective. He’s joking, right? After all, it’s difficult to take someone who opens a song with “Bedding Taylor Swift every night inside the Oculus Rift” seriously.

Yeah, of course he’s joking – he’s the Willy Wonka of folk rock that also happens to be too smart for his own good. He’s aware of how these songs could be misunderstood as preachy, and it’s intentional – he even plays into his ironic, bearded white guy shtick on several occasions: “Oh great, that's just what we all need / Another white guy in 2017 who takes himself so goddamn seriously," he’s told on the 13-minute self-doubt anthem “Leaving LA”.

In fact, “Leaving LA” sees Misty on some of his best form, with quips like “Five foot chicks with parted lips selling sweatshop jeans”, “LA phonies and their bullshit bands that sound like dollar signs and Amy Grant” and “It’s the pull quote from my last cover piece, entitled ‘The Oldest Man in Folk Rock Speaks’”, sprawling across the slow and exaggerated 13 minutes - the track uses the beauty of strings and a gentle acoustic guitar to juxtapose the boredom of Misty’s elongated diary entries in order to highlight his self-deprecation, while also playing into his perceived pretentiousness. It’s not the best track on the album, but it’s a good demonstration of just how much Misty doesn’t give a shit about what you think of him and his music.

Much more lively are the albums clear standout tracks “Total Entertainment Forever” and “Ballad of the Dying Man”. The former (which boasts the aforementioned Taylor Swift lyric) will keep you entertained and reaching for the repeat button for as long as the title suggests, while the latter is a classic deadly Tillman cocktail, laced with his trademark wit and underlying scorn as he describes a dying man who wastes his final moments by checking his newsfeed one last time.

Album opener and title track “Pure Comedy” sets the tone for the record and contains some of Misty’s most political lines yet: “Oh, their religions are the best  / They worship themselves yet they're totally obsessed  with risen zombies, celestial virgins, magic tricks, these unbelievable outfits / And they get terribly upset  when you question their sacred texts , written by woman-hating epileptics," while “Things It Would Have Been Useful to Know Before the Revolution” is one of Misty’s smartest songs to date, as he details a fictional reality that would take place if the world were free from its contemporary shackles and resorted back to its primal state.

Thank god that we haven’t just been given Honeybear Part Two, though. Sure, the sarcasm, the self-righteousness and the sanctimony of Honeybear is present in Comedy, but it’s packaged differently. At times, Pure Comedy is every bit as smart and funny as its predecessor but it’s unlikely it’ll be as successful.

In retrospect, success isn’t that paramount to Father John Misty’s relevance right now. He’s the embodiment and personification of the honest and overexposure that comes with the digitalisation of society, albeit through the outdated (although accessible and modernised) folk rock genre - he’s overly self-confident, yet openly insecure; he’s extremely critical, while his actions are wildly open to criticism.

He may only be another album (and/or a few tweets) away from becoming a parody of himself, but for now Pure Comedy is another elongated and extensive example of Misty’s intense outlook on cliché, contradictory and conceived contemporary life. If misunderstood, it’s easy to believe that the signified still signifies the signifier, but call Pure Comedy boring at your peril. The more you consider the deliberate indifference towards irony in Misty’s work, the more it feels like he’s letting you in on the joke.