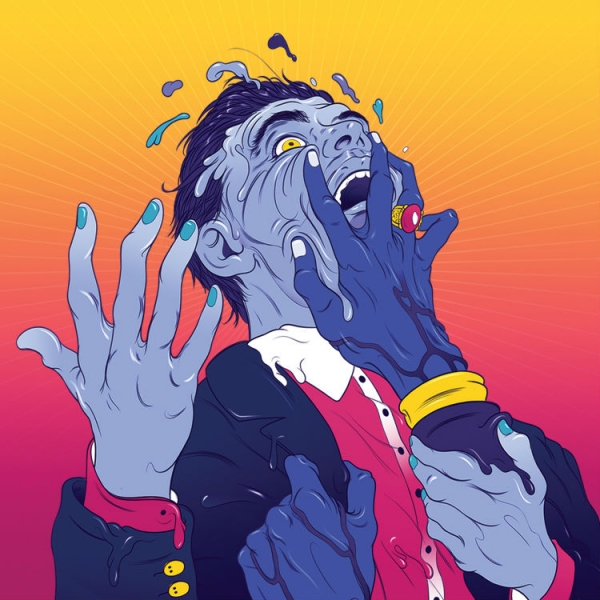 Man Alive juddered with art-pop intricacy and a statement of intent firmly grasped in Everything Everything’s fists: they were something new. Arc followed a few years later, with scaled back barricades and a newfound penchant for heavy-hearted lyrics and slowly-blossoming ballads. Get To Heaven, the Manchester-based band’s third long-player, looks set to borrow from both predecessors and then turn them both inside-out.

Expect hypnotic, plodding odes to the onslaught of right-wing nationalism, vibrant waves of dream-addled Ukrainian politics, and paeans to fantasised regicide with Ibiza in the crosshairs. Expect lines like “It’s alright to feel like a fat child in a pushchair old enough to run” in songs about the guilt borne from hyperawareness. Everything Everything have always been writing music that's more than just about love, but it's unlikely you would have ever expected them to unleash something like this.

“Distant Past” is hands-down the most bangeriest banger that they ever did write; house stabs, shoulder-shrug grooves, drops, rises, hooks galore – it's the kind of track that saunters up behind you and grabs your extremities, making them flail all over the place like a Wacky Waving Inflatable Arm Flailing Tube Man. “Regret” is similarly infectious, forcing you to bleat with cultish devotion every time they band chant their chant. Clearly, they still have that pop knack locked down – there's plenty of reasons to believe that they've actually gone above and beyond prior efforts when it comes to crafting their sound on this record.

“Spring/Sun/Winter/Dread” might just be the most addictive thing the foursome have hurled out – there are tropical lullaby vibes, and subtle resemblances to Taylor Swift. The breakdown's glorious semi-rap will have you tongue-tied on every listen. It's just great, great music – the “Kemosabe” of album three. All the tracks on Get To Heaven have their pop moments, but none, save perhaps the lead single, come as unabashedly chart-poised as this.

Skim the surface and you’ll find a glimmering pop album with a plethora of earworms, summer singalongs and crisp beats poised to make you wiggle that which can be wiggled. Peel back the skin of Get To Heaven and you’ll be rewarded with a Pandora’s Box of trauma, horror and complex mind-boggling ambiguities; pluck out any of 21st century humanity’s fuck-ups, and Everything Everything have had a go at dissecting it under the guise of chart-bothering noises. The band describe the record as a “Trojan Horse”, and that’s exactly what it is.

The album’s lustre sharply fades on repeated listens as the foursome leap both feet first into their subject matter. With its honey-trap tendrils it'll woo you, but once you're under the pop spell, the album rapidly becomes a Coraline-esque world of topsy-turvy demons, harrowing epiphanies and ne’er-do-wells – but make no mistake, it remains catchy as hell. Nothing will ever be the same again, and all the smiles will be replaced the crushing realisation that humans basically suck; at least the world will still be dancing, albeit with tears hurtling down every cheek.

Much has been made of British pop and rock's political apathy following the results of this year's General Election, and in the wake of Earth's glut of atrocities, and while Everything Everything aren't exactly at the vanguard of a rebellion as such, they're clearly willing to start a dialogue. This is pop music with complex narratives, and if the masses are willing to listen, they could be the band that recharges the UK charts with genuinely meaningful music.